Dinosaurs are an endless source of inspiration for writers, filmmakers and game creators alike, so Pragmatic Play also decided to join the club with their Jurassic Giants slot. It features everything you would expect from a game like this, from jungle landscapes to ferocious beast. But what really made this slot popular are it's almost endless free spins rounds and 4095 ways to win. To learn more about how to get up to 250 free spins in a single batch, check out our Jurassic Giants slot review where we uncover everything there is to know about this game's bonus mechanics, RTP, volatility and design. 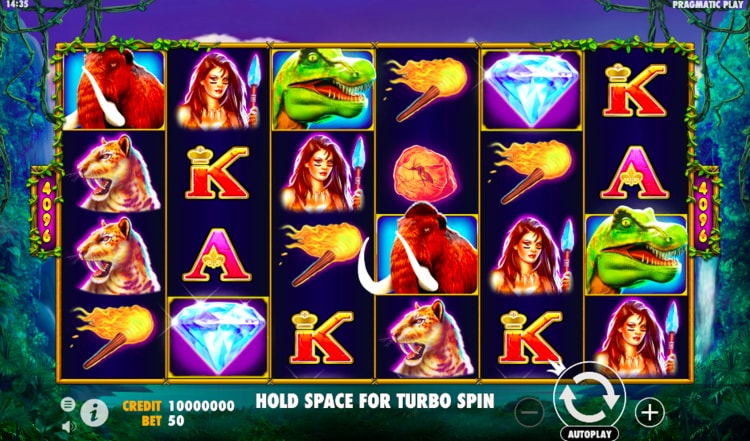 The Jurassic Giants slot machine is played over 6 reels with 4 rows, which is a bit bigger layout than you are used to seeing. A design like this opens up possibilities to form many more paylines. Jurassic Giants features 4096 ways to win, which are paid in both directions.

You can also take advantage of the autoplay button located on the right side of the screen. Pragmatic Play included many useful options in the autoplay menu, such as setting up the win and loss limits, as well as quick spin and turbo spin features.

When it comes to wagering limits, it seems that this game is more suited for players who like to bet big. The minimal limit starts at £0.50, which is a bit higher than average, while the max stake is a comfortable £250 per spin. In case you're one of the slot enthusiasts who like to play on the go, note that Jurassic Giants is powered by HTML5 technology, which makes it look equally great on both smartphones and tablets.

Jurassic Giants RTP rate stands at 96.1%, which is barely above the industry average of 96%. It means that this game is suitable for playing long term, but if you're serious about committing to a single slot, it may be a good idea to search for more favourable options. We have reviewed several slots with outstanding RTPs, such as 1429 Uncharted Seas with a return to player rate of 98.6%.

If you're looking for a highly volatile game, you're in the right place. The variance of Jurassic Giants slot machine is well above the average, which means that you won't score as many winning paylines, but once those free spins kick in, it all may pay off very quickly.

Walk Down a Prehistoric Jungle with Jurassic Giants Slot

This game has all the attributes of dinosaur-themed slots, starting from raptors and saber-toothed tigers to mammoths and prehistoric humans. We found this to be a bit confusing since most of these haven't actually coexisted in the Jurassic period. But since this is a slot game and not the palaeontology class, we won't make it as a big downside.

The background is a beautiful, deep-looking animated jungle, with lots of moving parts, such as waterfalls and swinging trees. Graphics look decent, but it feels like they could use a revamp. The game was released in 2017, so we have expected a bit more crisp and modern looking design.

The audio background is very melodic and mysterious. It sounds like they have taken it from some adventure movie. The soundtrack will play only after you spin the reels. If you stop playing for a while, the music will stop. It's a very engaging tune, which nicely adds up to the atmosphere of the game.

The whole game feels very comprehensive, so we are safe to say that Jurassic Giants is a nice addition to the pool of dinosaur-themed slots. If you already liked games like Jurassic Treasure, Raging Rex or Jurassic World, there is a high chance you'll love this one as well.

All of the higher paying symbols are prehistory inspired. There is only one dinosaur symbol, which is a bit disappointing, as we expected at least a few more of these ancient beasts. But there are mammoths, sabre-toothed tigers and prehistoric humans to fill the gap. Another big downside is that lower-paying symbols, which are usual card signs and numbers, aren't properly redesigned to fit the environment.

There are two special symbols included. Volcano Wild can substitute for any other sign apart from the scatter. Also note that it shows up only on the reels 2, 3, 4 and 5. The other one is Diamond Scatter, which triggers free spins. It's strange that Pragmatic Play has included a Diamond symbol in a dinosaur-themed game because it feels like it just doesn't belong here.

Jurassic Giants Slot Bonuses - It's all About Free Spins

This game offers just one bonus feature. It's the basic free spins round, so nothing too fancy. But the sheer volume of spins and multipliers makes it very rewarding. An important thing to know is that Diamond Scatters are stacked, meaning that you can get multiple of them in a single tile. So, don't be surprised when you see that you'll need at least 10 of them to trigger the free spins round. This is how many bonus games you can expect to get:

Every free spin comes with a 2x, 3x or 4x random multiplier. The great thing about this feature is that free spins can be retriggered during the bonus rounds by collecting Diamond Scatters all over again.

Pragmatic Play once again managed to come up with a decent slot game. The design could be a bit better, but the soundtrack is fantastic, and so is the overall gameplay. The bonus round can be very rewarding. However, it's just a basic free spins game with multipliers, so it won't give you any special trills.

Jurassic Giants is by no means the best dinosaur-themed slot on the market, but it's good enough for you to give it a try if you're into this kind of games.