John Hunter and the Aztec Treasure by Pragmatic Play

Pragmatic Play brought us the second instalment of the popular John Hunter series named John Hunter and the Aztec Treasure. This adventure includes up to 7.776 ways to win, as well as a super rewarding bonus round with free spins and multipliers. Vibrant graphics and smooth gameplay make this game a real treat for all adventure-themed slot lovers out there.

In this John Hunter and the Aztec Treasure slot review we will cover everything from bonus mechanics and special symbols to RTP and volatility, so make sure you stay with us until the end. 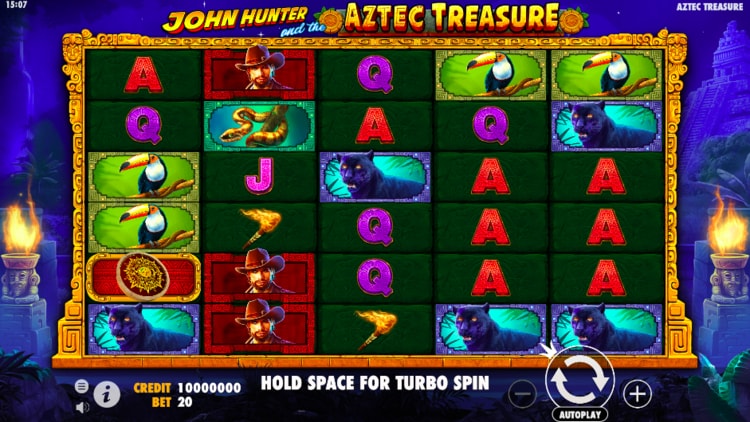 John Hunter and the Aztec Treasure features 5 reels with each of them having up to 6 symbols slots. Most of the time, symbols will take more than one spot, which leads to a different number of paylines in almost every turn. When in the full scale, max number of ways to win is 7.776. Because of mechanics like this, you can't change the number of active paylines, meaning that you'll always have to bet all of them.

When it comes to the bet range, John Hunter and the Aztec Treasure slot is somewhere around the industry average. Minimal wager starts at £0.20, while the highest bet is £100 per spin, which should be enough to please both high-rollers and players on the budget. Pragmatic Play also included an excellent autoplay option, which is great news for more dedicated players. You can set up to 100 automated spins, as well as program it to stop when wins or loses reach a certain level.

This slot has an excellent RTP rate of 96.5%, so we are safe to say that it's good enough even if you're planning to spin for an extended period of time. There are of course slots with even higher return to player rating, but for the most users, John Hunter and the Aztec Treasure will do just fine.

In terms of volatility, Pragmatic Play states that this slot falls in a group of highly volatile casino games. It means that winning paylines won come that often, but at the same time, chances for hitting a big payout in a short time span are higher than average.

This Pragmatic Play Aztecian masterpiece is heavily influenced by the famous Indiana Jones film series. Apart from the beard, John Hunter looks exactly the same as Indiana, with a famous whip, hat and letter coat all included. Aztec motives dominate the playing board. The background looks like a jungle landscape with a huge temple on the side.

There are quite a few moving parts here, including the animated torches, swinging trees and night sky full of blinking stars. While the game symbols could look a bit crisper for our taste, the artwork in the background is stunning. Pragmatic Play did an overall great job designing John Hunter and the Aztec Treasure slot.

The soundtrack is melodic and mysterious. It feels like something they play just a few moments before the action is going to start in some adventure movie. When you hit the 'spin' button, the music will intensify, making this game even more exciting. There are also a bunch of bird and animal sounds in the background, which perfectly adds up to the atmosphere of the game.

Most of the high-paying symbols are jungle animals, like snakes, panthers and toucans. But there is also John Hunter himself, as well as his hat and whip. On the lower end of the paytable, you'll find common A, K, Q, J signs. They are all redesigned to fit into the Aztec style of the game.

Wild is a Golden Aztec Totem with word 'WILD' written all over. It shows up only on the reels 2, 3, 4 and can substitute for any other symbol apart from the Bonus sign. There is also Aztec Coin Bonus Symbol, which triggers free spins round, but more on that in the following paragraph.

The John Hunter and the Aztec Treasure slot comes with just one bonus round, but if you're lucky enough to reach it, it can be very rewarding. To start the feature, you'll need at least 3 Aztec Coin Bonus Symbols anywhere on the reels. The more Bonus signs you land, the bigger the prize will be. The number of free spins is random. Here are the details:

Before every free spin, you'll be awarded a 2x, 3x, 4x, 5x, 7x or x10 multiplier. Which one you get is randomly determined. But that's not all. In case you land at least a couple of more Bonus Symbols during free games, there will be another batch of free spins waiting for you. This is how much additional bonus spins you can get:

Final Verdict on John Hunter and the Aztec Treasure Slot

It is a solid slot game. The gameplay is smooth, the soundtrack is engaging, and for the most part, graphics are on point. The bonus round can be very rewarding, especially if you land those 10x multipliers. However, we would like to see more diverse bonuses instead of just one simple free spins feature.

There are a few things that Pragmatic Play could have done better here, but an overall impression is positive. If you're searching for an entertaining slot with dynamic gameplay, John Hunter and the Aztec Treasure would be a great choice.