The works of 19th century authors often seem to get plundered for ideas by slots developers. It’s the turn of iconic Scottish novelist Robert Louis Stevenson to be used for a theme in this Playtech slot called Jekyll and Hyde. The main character in the novel had a split personality, and this game reflects that cleverly. How? You’ll need to read this Jekyll and Hyde slot review to find out! We’ll take a closer look at the game here, and give you a full rundown on what makes it so appealing. 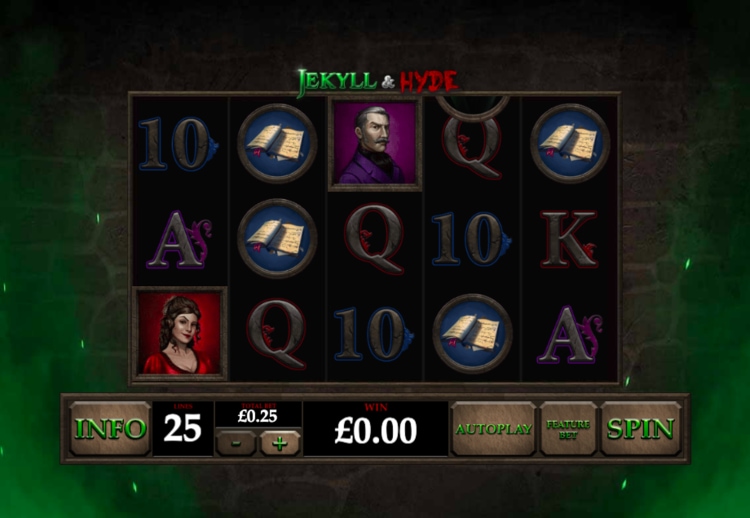 The Details of the Jekyll and Hyde Online Slot

The Jekyll and Hyde slot game is played on a grid of 5 reels and 3 rows, with 25 paylines. The minimum bet that you can place is 0.25 coins and the maximum is 1,250 coins. It can be played on all mobile devices, thanks to its use of HTML5 technology. It was released in April 2016, so has had nearly 4 years to establish itself on the market.

An autoplay function is available if you’re the sort of slots gamer who likes to watch the action unfold. Given the quality of this game’s graphics, you might well find yourself using this option. You can also switch to turbo mode if you want to speed things up a little.

What is the Jekyll and Hyde slot RTP?

Of course, basing any slots strategy on RTP is flawed, so it might be more useful to you to know that the game has a mid to high variance. This means that you should keep your eye out for the big wins that can be triggered, and there is likely to be plenty of excitement when you play. We certainly found that this matched our experience when we played the slot.

The Jekyll and Hyde online slot looks good without being overly impressive. There is a pleasant understated feel to it that fits with the theme of 19th-century literature. The reels are set in front of grey cellar wall which looks like it is supposed to be Dr Jekyll’s basement laboratory. Green fumes rise up the wall, creating an impression of horrific scientific experiments.

The game has a smooth and slick feel to it, with the understated colours of the backdrop and fine details of the character portraits on the reels giving a sense of refinement. It certainly looks a lot classier than Betsoft’s Dr Jekyll and Mr Hyde slot game, and a lot slicker than Microgaming’s Jekyll and Hyde. The reels move smoothly and there is nothing awkward or stilted about the game’s action.

The sound effects are impressive too. You hear various laboratory noises as you play, which helps to create a really immersive atmosphere. The music is minimal and limited to some sweeping and dramatic refrains. It is not at all intrusive, which is a real plus point in our view.

When it comes to the symbols on the reels, the lower value ones are numbers and letters, with 10, J, Q, K and A all used. The detail in these is nothing special. The higher value symbols look more interesting. These consist of a top hat, a book, and two glamorous looking women. There is also a distinguished-looking chap that we took to be Gabriel Utterson, the narrator of Stevenson’s novel.

Of course, you also see Dr Jekyll on the reels, and he can transform into Mr Hyde. He is the game’s wild symbol and can only appear on reels 2, 3 and 4. If wins are possible he will transform into Mr Hyde, occupying more spaces on the reels and substituting for other symbols to create winning combinations for you. The green potion is the scatter symbol that triggers the feature, and we’ll take a look at that in the next section of this review.

It is worth noting that you have an option to double your stake by pressing the feature bet button at the bottom of the screen. This turns the green scatter symbol into a red one. It can count for you and help to trigger the feature even if it is just outside the reel area when you play in this mode.

In the introduction to this review, we mentioned that the split personality of the novel’s main character was reflected in this slot’s features. There is one free spins feature that can be triggered, but there are two sides to it. You can receive Jekyll free spins or Hyde free spins, and we’ll take a look at each of them here.

The free spins features are triggered when 3 of the potion scatter symbols land anywhere in view on the reels. Of course, if you have pressed the Feature Bet button they can land just out of full view and still count. When the feature has been triggered, you get the choice of 2 options.

With both of these features, you need to watch out for additional scatter symbols landing on reel 5. Each time one spins in, part of the potion is consumed. If this happens 4 times the bonus feature ends. This means that your free spins can last a very long time indeed if luck goes your way. We enjoyed at least 30 spins before things came to an end when we tried the game. The fact that you benefit from the scatters appearing as well as them harming you is also a nice reflection of the original novel’s theme.

This Jekyll and Hyde slot review will conclude by saying just how much we liked this game. Maybe it’s our weakness for classic Scottish literature, but we felt that this game was one of the better slots we have seen based on classic novels. It felt very similar to another slot based on a Scottish author’s 19th-century creations – Yggdrasil’s Holmes and the Stolen Stones. Although probably not among the top rank of slots, the Jekyll and Hyde online slot offer quality graphics, an immersive atmosphere and some interesting features. The split feature is an interesting way of reflecting the novel’s story. We recommend that you try it out today!

🎰Were Dr Jekyll and Mr Hyde real people?
No, the Jekyll and Hyde slot machine is based Robert Louis Stevenson’s novella The Strange Case of Dr Jekyll and Mr Hyde, which was published in 1886. The novel is entirely fictional and deals with a scientist (Jekyll) who finds a way to transform himself into a man who can give full vent to a range of vices. A meditation on the duality of human nature, the work is considered a classic of Scottish, and world, literature.
🎰Is a Jekyll and Hyde slot free play option available anywhere?
Most online casinos that provide you with the opportunity to play Playtech slots will have a demo mode option available. To find online casinos where Playtech slots are available, use our up to date casino list on this website. You can keep track of all the new casinos that spring up, as well as find the best bonus offers. You’re sure to find a good casino where you can play Jekyll and Hyde for free.
🎰What is the most valuable symbol on the reels in the Jekyll and Hyde online slot?
You can find a full paytable for this slot by clicking on the info tab on the game’s home screen. But the most valuable of all the symbols that you’ll find on the reels is the Gabriel Utterson symbol. Utterson is the narrator of the original novella. This distinguished gentleman pays out 1000x your stake if 5 of him land on a payline. Don’t confuse him with Dr Jekyll who is the game’s wild symbol that can transform into Mr Hyde.