Jade Emperor by Ainsworth Gaming Technology might share its name with another game by Playtech, but that doesn’t mean it’s unoriginal. Part of the genre of Asian-inspired slots games, Jade Emperor aims to take players on a trip to the Far East while still bringing a little bit of Vegas with them for the ride. 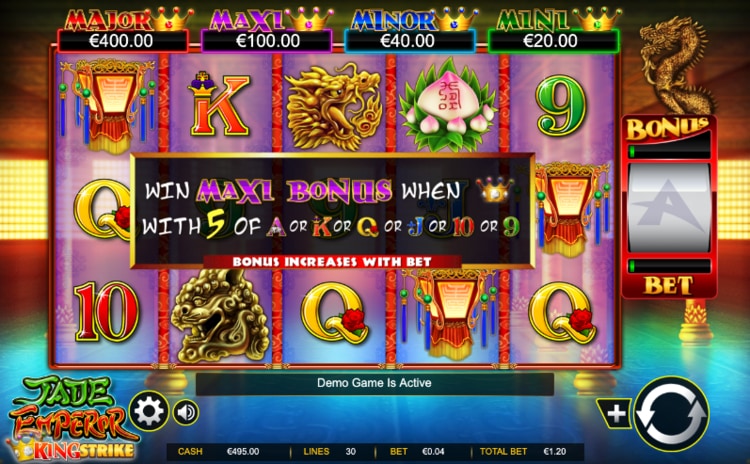 Ainsworth Gaming’s Jade Emperor features 5 reels, 3 rows, and a special 6th reel containing only 1 cell. Between 1 and 30 paylines, which the player can manually adjust. Wagers on a single spin can be as low as £0.01 (with a single payline) - £0.30 (with all paylines active) all the way up to £3,000.

The slot feels a little dated, which we’ll expand on more below, but to give an example, the autospin feature only allows players to set a maximum of 25 spins, which is a far cry from the standard 100/200 spins that most slots feature. On the other hand, though, a maximum win of 1,500x wager is definitely something we’re on board for.

Ainsworth’s Jade Emperor has a theoretical RTP of 94.41%, which is well below the industry average and is actually a bit of a red flag. This is also a high volatility slot, meaning it’s better suited for players willing to take risks and chase big wins than it is for players looking for more reliable small and medium wins.

Ainsworth Gaming Technology isn’t a company that’s particularly known for its artistic flair or orchestral masterpieces, they’re mostly known for their land-based casino games, and Jade Emperor looks and sounds like it belongs in an old, land-based video slot machine. You can tell which symbol is which, and that’s what counts, but the audiovisuals are cheap and dated.

The soundtrack, well isn’t really a soundtrack. There’s no background music, just your standard “slot” noises of spinning reels and clinking coins. If you’re anything like us, you’ll likely mute the game and put a playlist of your own music on while playing Ainsworth’s Jade Emperor.

As far as the visuals go, it’s clear that they were going for an Asian theme, though doesn’t quite have the same effect as what Bally did with their slot 88 Fortunes Megaways. As we said, it all feels a little dated and a little cheap, but you’ll never mix up one symbol for another.

The high-paying symbols are all China-themed, and are actually feature quite a bit of complex detail in their design. There’s the White Peach, the Jade Pot, the Paper Lantern, the Lion Statue, and the Dragon Head.

The Wild symbol is the Emperor, and this symbol can substitute all other symbols in the game except for the Temple and the Crown. The Scatter symbol is the Temple, which is a high-paying symbol in its own right, as well as serving as the bonus symbol when at least 3 show up on the reels at once.

The Crown is unique as it can only appear in the single-celled extra reel. The Crown decides whether or not players win a jackpot or not. We’ll discuss this system in more detail below, but players should keep in mind that Wilds do not appear in the 6th reel, and thus the Crown cannot be replaced by any other symbol.

Jade Emperor, by Ainsworth Gaming, has two different bonus features. What we like about this is that each of the features is unique and offers players different benefits. One gives players free spins, which is always appreciated, and the other is a jackpot win feature.

The Free Games bonus round is activated by the Scatter Temple symbol. If between 3 and 5 of these symbols show up on the reels, players get both an instant payout as well as a number of free spins, as below:

What makes this even better is that this is re-triggerable, every 2 Temple Scatters that show up during the Free Games round rewards players with an additional 5 free spins.

There are 4 different jackpots to be won, with the amount of money up for grabs changing depending on your stake per spin. If you’re at the maximum and wagering £3000 per spin, the Major jackpot goes all the way up to £1,000,000!

For most players, though, the jackpots are likely to be anywhere between £20 and a few hundred pounds. The 4 jackpots are the Mini, the Minor, the Maxi, and the Major. As the names suggest, the Major is the highest value of the four jackpots, and the Mini is the lowest value.

Which jackpots you’re eligible to win depends on how much you’re wagering on a single spin. We’re not the highest rollers, so we found ourselves mostly limited to the Mini and Minor jackpots, and sometimes being eligible for the Maxi jackpot.

To win one of these jackpots, players need an unbroken payline of 5 identical symbols (i.e. no Wilds substituting as symbols), and for the 6th reel to also land on a Crown symbol. This might sound exceptionally difficult, but during our Jade Emperor slot review testing, we won jackpots regularly enough that we were always aware of the jackpot amounts.

While the bonus features are useful enough, fans of more modern or more complex online slots games are unlikely to be all to impressed. Ainsworth’s Jade Emperor looks and feels like a video slot machine game from a brick and mortar casino. This, combined with the pedestrian bonus features, low RTP, and high volatility make it a tough sell.

This Jade Emperor by Ainsworth slot review can only end in one way: if you’re a player who likes to take big risks and not be bogged down by too many features to learn, this is the game for you. If you’re looking for more consistent wins, or a more polished slot game, then we recommend looking at 88 Fortunes Megaways or Playtech’s Sun Wukong.

🎰 What’s the RTP of Ainsworth’s Jade Emperor slot?
Jade Emperor, Ainsworth Gaming’s China-themed slot game, has a theoretical RTP of 94.41%. This is quite a bit lower than we’re used to seeing, and coupled with the game’s high volatility, means that we only recommend this to players looking to take risks.
💸 What’s the maximum jackpot possible on Jade Emperor by Ainsworth Gaming?
The game features 4 different jackpots, all of which contain different jackpot amounts depending on how much players wager per spin. If players wager the maximum they’re allowed to (i.e. £3000 per spin), then the Major Jackpot can go as high as £1,000,000!
📈 Are there any multipliers in Ainsworth Gaming’s Jade Emperor slot game?
Unfortunately, no, Jade Emperor doesn’t feature any multipliers. The game does, however, feature 4 different jackpots, though. As we mentioned in our Jade Emperor slot review above, jackpot wins happen frequently enough that most players are likely to experience several of them over a few hours of continuous play time.