If you’re a fan of classic cartoons and old school private detective stories then the Jack Hammer slot is the casino game for you! Sharp-eyed readers may have noticed that this game is the first in a series of top titles from Net Entertainment, all of which provide plenty of great thrills.

In this Jack Hammer slot review, we’ll take a closer look at the original game in the series, and give you all you need to know about its bonus features and potential for providing top prizes. Enter the world of espionage and find out more about Jack Hammer and his slots adventures. 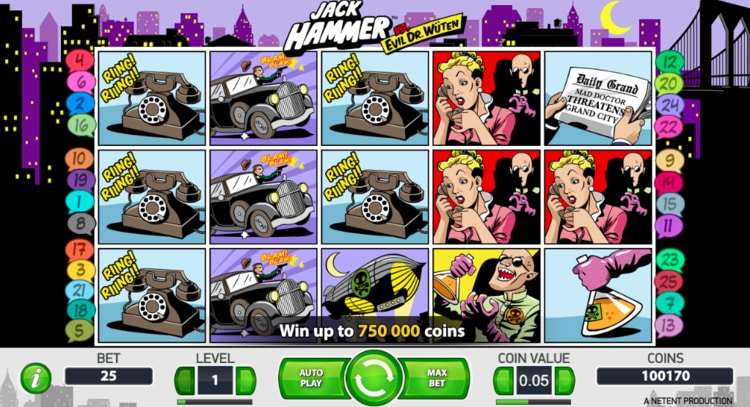 The first thing that you will strike you about Jack Hammer is the quality of the graphics. We’ll take a more in-depth look at the way the game looks and sounds later. For now, all you need to know is that there are 5 rows, 3 reels and 25 paylines of action to enjoy. No surprises there.

You can bet from 0.01 to 1 coin and bet a total of 10 coins per line. Bet sizes range from 0.25 currency units to 250 currency units per spin, and the jackpot is 1000 coins. There is an autoplay feature that allows you to sit back and enjoy the gorgeous graphics without having to worry about clicking play.

Jack Hammer is a low volatility slot with a Return to Player rate of 96.96%. This makes it the type of game where you can expect to pick up a reasonable amount of lower value wins the longer that you play it. Your chances of picking up really big wins are lower than they might be in other games, but you can expect to be successful if you are sensible.

The RTP is on the higher side, especially when compared to classics like Novomatic’s Book of Ra. Of course, some of the newer slots do bear higher RTP values. It all comes down to personal preference.

How Does the Jack Hammer Slot Look and Sound?

As seen in the previous section, in terms of layout, Jack Hammer slot is pretty similar to most video slots. What really sets the online slot apart is its graphics. This is a game that pays tribute to the classic comic book stories of the 1950s, and it has clearly been crafted by people who have a deep love for their subject matter.

What Are the Jack Hammer Slot Symbols?

The symbols on the reels all relate to the story of Jack Hammer, who is a 1950s type private detective, complete with overcoat and trilby. The theme is somewhat expected but the attention to detail that has gone onto the graphics is sure to make you smile.

There are 4 higher value symbols to look for. These are a paperboy, a glamorous woman on the phone, evil Dr Wuten and Jack Hammer himself. Jack is the highest paying symbol, bringing in wins of 2, 6 or 40 times your stake, depending on how many of his symbols appear on paylines.

There are several lower value symbols to look out for too. These include Dr Wuten’s blimp, a car, a ringing telephone and a beaker of orange poison. The ticking time bomb is the free spins bonus symbol, and there is an explosion that functions as the game’s wild symbol. This can substitute for all other symbols to form winning combinations for you.

The Jack Hammer slot symbols do not so much spin on reels as getting shuffled among the pages of a comic. The reels are actually a grid that follows the template of a comic book, and the way they move is very slick and swift. Despite the design harking back to the past, this is not a game that feels ‘retro’ or clunky in any way.

The sound effects are great too, with the reels making the sound of turning paper pages as they spin. There are also some nice jazz sounds punctuating the action, which puts the music above the level of most other slots games that we have played. The win counter makes a noise like a little jack hammer, which is appropriate but can grate a little.

That is but a minor quibble, though, as this game looks and sounds superb. There is a real sense of excitement about the game, despite its relative lack of bonus features, and the beautifully rendered graphics are a big part of this. They are similar in some ways to the top graphics that can be found in another of Net Ent’s crime-themed games – Scarface.

Despite the outstanding graphics, one area that does let Jack Hammer down a little bit is its bonus features. They are just a bit limited in scope, and certainly not what we were expecting from a game that looks so good and plays so smoothly.

The first feature that you might encounter when you play the Jack Hammer slot is the sticky win feature. This is a pretty common feature in many Net Ent games, so if you are a fan of theirs you may already know what to expect. Every time you spin in a winning combination, or three or more free spin symbols, you will activate the sticky win feature.

The winning symbols remain in place and a free re-spin is triggered. If another win is generated, then those symbols will remain in place for another free spin. This process continues until no more winning combinations appear. It can create some pretty epic wins for you if your luck holds.

The game’s main bonus feature consists of free spins. While these are always welcome, many newer slots games, such as Blueprint Gaming’s Wish Upon a Jackpot, have a varied and extensive range of bonus features. A simple free spins feature is okay, but we were a little disappointed that there was not slightly more on offer.

The sticky wins feature can also come into play during the free spins bonus. This means that you can generate some really big wins. This can be exciting, and it certainly looks good, but there is not much that you can do to influence outcomes. The overall feeling is that the bonus features are good, but the game promised so much more. Nevertheless, no one should feel too disappointed by the bonus features in Jack Hammer.

We’ll conclude this Jack Hammer slot review by saying that this is one of the best looking online slots games that we have seen. Fans of retro comics will particularly enjoy the game. But even if you aren’t a die-hard fan, the visuals should catch your eye. The gameplay is also very smooth and slick, and playing this game is a high-class and immersive experience.

The sound effects and music are also better than what you will find in most other online slot games. Some players may feel let down by the lack of varied bonus features, but the free spins and sticky win features do provide you with plenty of chances to win. Make sure you look out for Jack Hammer at your favourite online casino!

🎰What are the other titles in the Jack Hammer series?
The Jack Hammer slot game featured in this review is sometimes also known as Jack Hammer vs Dr Evil Wuten. There is also a sequel to this game available. It is called Jack Hammer 2, but you might also see it referred to as Jack Hammer 2: Fishy Business. Like the first game, it offers superb graphics as well as a typically classy Net Ent gaming experience.
🎰Is there a Jack Hammer slot free play option?
At most online casinos that offer Jack Hammer you will have the chance to play the game for free in demo mode. This is a good way of getting to know the game’s intricacies and how the bonus features work, without having to risk any real money. Seasoned slots gamers often use this option to sharpen up their strategy before playing a new game.
🎰Does Jack Hammer have a progressive jackpot?
No, Jack Hammer is not a slots game that has a progressive jackpot that builds until one lucky player claims it. Games of this type can be a great deal of fun to play, though, as well as being very exciting. If you want to check out some games with a progressive jackpot, try Net Ent’s Mega Fortune Dreams or Microgaming’s The Dark Knight.
🎰Should I bother playing Jack Hammer or just play Jack Hammer 2?
Jack Hammer is a good slots game that offers plenty of excitement to players, and we would recommend that you play it before you head onto trying out its sequel. Nevertheless, we would also recommend that you try Jack Hammer 2 as soon as you can, not least because of its RTP rate of 97.10%, and its excellent stick wins feature that can bring prizes of up to 990,000 coins.