The Hot Shots slot is a game from iSoftBet that combines football with cartoon animals. That’s not something that has been done that often, so, as football fans, we were certainly interested to see if iSoftBet could pull it off.

So were we over the moon after playing this game? Or sick as a manager after a 5-0 home defeat? You’ll have to read this Hot Shots slot review to find out! 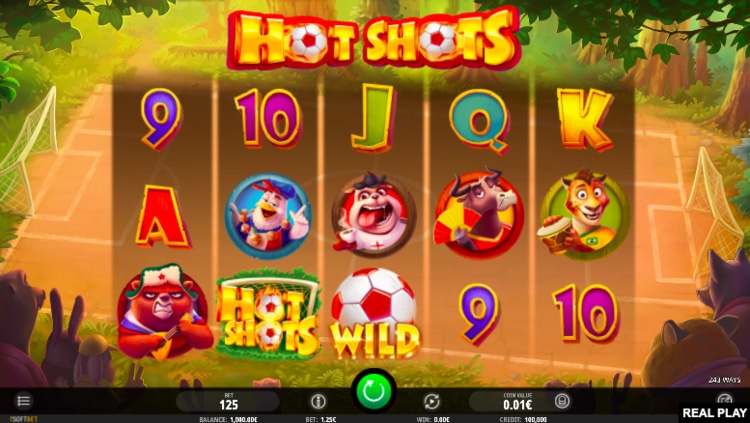 The Hot Shots slot machine is played on a grid with 5 reels, 3 rows and 243 ways to win. There are no conventional paylines on the grid as such. Instead, you need to line symbols up adjacently on successive reels. The minimum bet for UK players is usually 25p and the maximum is £125. The game can be played on mobile devices without there being any compromise in quality, thanks to its use of HTML5 technology.

The game was released in April 2018, with its release intended to tie in with the FIFA World Cup that took place in Russia that summer. There is an autoplay button on the game if you are the kind of slot player who likes to take a spectators role. In this case, that’ll have you in the grandstand for this particular football match.

The Hot Shots slot game has an RTP of 97.15%, which is relatively high for a slot of this type. It is also high if you compare it to other slots from iSoftBet. Their titles usually have an RTP of between 95% and 96%. There are other iSoftBet titles with a similar RTP to Hot Shots, however. Their Rambo branded slot, for example, has an RTP of 97.02%, while their Shaolin Spins slot stands at 97.15%. These figures are the exception rather than the rule.

If you like to shape your strategy for slots based around a game’s volatility, then you should know that Hot Shots is a medium to high volatility slot. This means that you do have a chance of triggering larger wins but perhaps not very often. Regular small wins are also unlikely. This is a game where patience pays off. When the big wins arrive, they tend to be massive. When we played this slot, we found wins quite hard to come by at all. When they did come, they were very big and the expanding wild symbol proved very handy indeed. You can find out all about the expanding wild later in this review.

The Hot Shots slot looks really appealing and charming. Its graphics are rendered in the style of a kids’ cartoon show, and they are of high quality. The reels are set in front of a dusty looking football pitch which is obviously the main stadium of this animal World Cup. It is very appealing and looks a lot like a Disney film. Various animals sit in the stands, watching the action unfold in this woodland stadium surrounded by lofty trees.

When it comes to sound in the game, the reels make a pleasant whirring noise as they spin. Your actions are also greeted with crowd noise and chants, which helps to put you right in the middle of this strange stadium setting. There are groans of disappointment and roars of success too, so you get a real sense of atmosphere. You may end up reaching for the mute button after a while, but this is not a game where the sound effects are going to get on your nerves right away.

Sing up for Your National Animal!

The lower value symbols on the reels are the usual range of numbers and letters. They are rendered in an appealing cartoon style and certainly do their job. The higher value symbols are all animals, and they are very charismatic and quite endearing. Each of the animal symbols is associated with a different country too, which is another nice touch that we enjoyed. You’ll see a bulldog wearing England’s colours, complete with a cup of tea, and a jaguar dressed in Brazil’s kit. Spain is represented by a fierce-looking bull, while France has a chirpy cockerel. A rather grim-looking bear playing the balalaika represents Russia, and he’s not a character we’d like to meet on the terraces!

The wild symbol is easy to spot as it is a big red and white football. It can replace any symbol to create winning combinations for you, apart from the scatter symbol. It can also expand horizontally and vertically to cover several spaces on the reels. The game’s scatter symbol is the Hot Shots logo. This is worth 10x your total bet and also triggers the free spins feature if 3 or more it appears on the reels. We’ll take a closer look at that feature next.

Before we deal with the free spins feature in this game, it is worth noting the expanding wild symbol and how valuable it can be. While this is not in the truest sense a bonus feature, we found that the wild football symbol played a huge role in us winning big prizes. The way that it expands to cover several spaces is animated really well, and it’s almost an extra bonus feature. Keep your eye on the ball when you play the Hot Shots slot!

But now let’s take a look at those free spins and see what they offer you. As well as triggering free spins, the scatters will also award wins in their own right. You can see how this breaks down below:

We have to say, though, that we found this feature very hard to trigger. There were quite often times when two scatters would spin and then the rest of the reels would take an age to come to rest, only to leave us with nothing. You need to be patient in this slot, but it will often pay off in a pretty lucrative style.

We love football and we love slots, so this Hot Shots slot review is going to end on a very positive note. Its charming cartoon graphics, immersive sound effects and charismatic characters certainly held our attention. While we would have liked the bonus feature to come along more frequently than it did, it was welcomed well when trigger it. This is certainly a game that scores when it shoots.

If you want to try some more football-themed slots, then cast your eye over Golden Goal from Play’n GO, Playtech’s Football Carnival, or perhaps Football: Champions Cup from Net Entertainment.

🎰Is there a Hot Shots progressive slot machine too?
There isn’t a progressive jackpot version of the Hot Shots slot currently on offer from iSoftBet. What you might have heard of, though, is a game called Hot Shot from Bally Technologies. This game is completely unrelated, but it does feature a progressive jackpot as well as a host of bonus features. The Hot Shot progressive slot machine does not feature football-playing cartoon animals.
⚖️Are there any other Hot Shots slots available?
You might think that some new Hot Shots slots would have appeared by now, given the popularity of football. As things stand, there have been no sequels to this game produced by iSoftBet yet. We very much hope that they will produce one, however. Given that Euro 2020 will take place this summer in 12 cities across Europe, we might yet see some more Hot Shots slots casino games on the market.
❓How can I find out what each symbol is worth in the Hot Shots slot?
If you want to know what each symbol is worth in this game there is the paytable. You can access this by clicking on the ‘I’ tab at the bottom of the screen during play. Not only will this give you the value of each symbol, but it also has some useful information about how the bonus feature works.