Sherlock Holmes is one of the world’s great fictional characters, and there are plenty of slots out there that use Sir Arthur Conan Doyle’s detective as their theme. Swedish developer Yggdrasil has added another game to the range with the Holmes and the Stolen Stones slot.

We’ll take a closer look at the game in this Holmes and the Stolen Stones slot review. You can find out about the bonus features and how you can win one of 5 progressive jackpots. 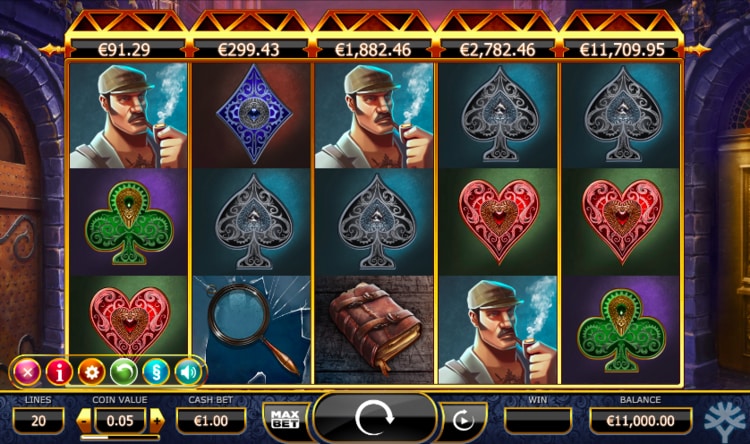 Holmes and the Stolen Stones Slot: The Details

The Holmes and the Stolen Stones slot was released in September 2015 by Yggdrasil and it is available in 26 languages, including English, German and Spanish. The game is played on a grid of 5 reels and 3 rows, and there are 20 paylines. The game is optimised for play on mobile devices and can be played in a variety of browsers on your desktop computer. These include Firefox, Microsoft Edge and Chrome. There is an autoplay feature, which might well be useful, given how impressive this game looks.

The minimum bet you can place in this game is 0.2 coins and the maximum is 40 coins. The maximum win on offer, according to Yggdrasil’s website, is £24,000. There are 5 local progressive jackpots available to win too, and we will take a closer look at those later on in this Holmes and the Stolen Stones slot review. The game has a medium to low variance, so triggering the feature can sometimes seem a little difficult. We certainly found it tricky when we played the game.

What is the  Holmes and the Stolen Stones Slot’s RTP?

The RTP rate for this slot is 96.80%, which places it in a fairly typical range for this type of video slot. The vast majority of Yggdrasil’s slots have an RTP of between 96 and 97.00%. Examples include Gem Rocks (96.20%), Jackpot Raiders (96.30%) and Nitro Circus, which has an RTP of 97.00%. Considering that there are progressive jackpots on offer, that RTP is perhaps a little high. Other slots with progressive jackpots tend to have lower RTPs.  An example is the Deal or No Deal What's in your Box slot from Blueprint Gaming, which has an RTP of just 92.54%.

Lush Graphics and a Hipster Holmes on Show Here

Yggdrasil, like other Scandinavian developers like NetEnt, really works hard on the graphics in their games. The Holmes and the Stolen Stones video slot certainly looks great, with the graphics having a richness and detail that is typical of Yggdrasil games. Although the graphics are cartoon style, they are Walt Disney type movie cartoons, not the kind of stuff you’d find in The Beano. Dramatic shades of purple, grey and yellow help to create atmosphere, with the reels set in front of the corridor in a castle.

The game’s music is dramatic, but largely forgettable after a few minutes. Other sound effects help to create atmosphere without being particularly notable. Another interesting aspect of the game’s look is that the characters of Holmes and Watson do not look like the clichéd versions of themselves that we are so familiar with. They look more like contemporary hipsters with beards, glasses and pipes.

Holmes and Watson are 2 of the game’s higher value symbols. The others are a leather-bound book and a magnifying glass. The lower value symbols are playing card suits, with each suit rendered like an ornate gem of a different colour. They look impressive. There are 2 bonus symbols to watch out for, but no wild. The bonus symbols are keyholes, with a blue one marked as ‘bonus’ and a golden one marked as ‘free spins’. They match the two doors that are displayed at either side of the reels. The blue doorway is at the left of the reels and the golden one is at the right. We will look at the bonuses that they trigger in the next section of this Holmes and the Stolen Stones slot review.

There are two Holmes and the Stolen Stones bonus features for you to enjoy. There is a free spins feature and a bonus game. Both bonus features give you the chance to trigger the game’s progressive jackpots too. We’ll take a closer look at how all this works here.

Win 1 of 5 Holmes and the Stolen Stones Progressive Jackpots

You can win 1 of the 5 progressive jackpots on offer. The jackpots are local, with seeds ranging from £40 to £10,000. Out of every bet, 3.8% is contributed to the jackpot. To win one of the jackpots you must collect 5 full diamonds of the same colour. The jackpot that applies to each colour diamond can be seen above the reels as you play the game. The probability of winning a jackpot is proportional to your bet size, so if you’re keen to capture one of the larger prizes make sure you bet big!

This Holmes and the Stolen Stones slot review will conclude by stating that we think that this is a good game, overall. The graphics are lush and rich, and the gameplay is slick and smooth. The bonus features provide plenty of action, even though triggering them can sometimes seem hard, and there are some nice progressive jackpots to pick up too. The game’s immersive atmosphere is well worth soaking up, and it was also notable to see Yggdrasil steer away from the old deerstalker and tweed stereotype of Holmes and present the character differently.

If you’re keen on playing more slots with a Sherlock Holmes theme, you might want to try Sherlock off London from Rabcat, or possibly Sherlock: A Scandal in Bohemia, from Tom Horn Gaming.

🎰Is Holmes and the Stolen Stones based on a real Sherlock Holmes story?
Sharp-eyed fans of Sir Arthur Conan Doyle’s work will have spotted that this slot is not based on any of the author’s fictional detective’s adventures. There is no story about Holmes and Dr Watson having to recover stolen stones in the Sherlock Holmes canon. That does not mean that fans of Conan Doyle’s work cannot enjoy playing this entertaining slot, though! There is still plenty of fun to be found in this game.
🎰How can I learn how to play Holmes and the Stolen Stones?
If you head over to the official Yggdrasil website, you can find a demo version of this slot that you can play for free. There is an info tab in the game that tells you all about the bonus features and how they are triggered. There is also a pay table that gives you all the symbol values and the payline structure. Playing in demo mode for free also means that you can practice your strategy without risking any real money.
🎰Where can I find a Holmes and the Stolen Stones casino?
There are plenty of casinos that feature Yggdrasil slots like Holmes and the Stolen Stones. The best way of finding one is to use this website. We have a full list of casinos where you can find Yggdrasil slots. New ones are popping up all the time, so make sure you check back here as often as possible to find all the new additions to the list!