There Can be Only One Highlander Slot!

‘There can be only one!’ was the tagline of the 1986 movie Highlander, which was an entertaining pseudo-historical action romp starring Christopher Lambert and Sean Connery. Microgaming’s slot of the same name looks to capture the adventure and thrills of the movie, in which the action leapt from the 16th century Scottish Highlands to 20th century New York City.

Did Microgaming succeed? You’ll need to read this Highlander slot review to find out! You can discover all you need to know about this engaging and intriguing slot here. 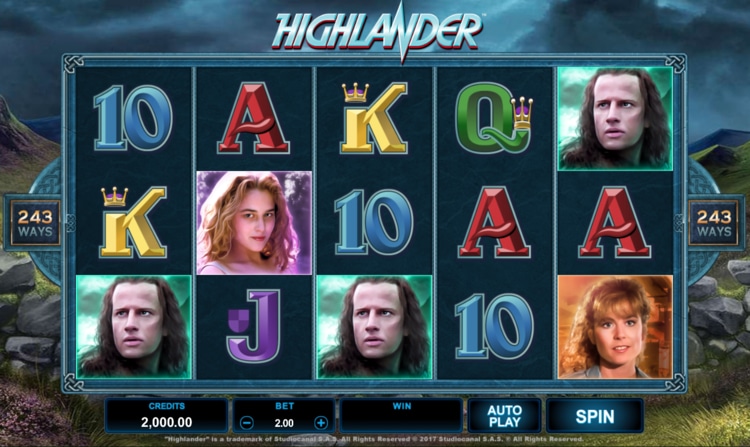 The Key Details of the Highlander Slot Game

The Highlander online slot is played on a grid of 3 rows and 5 reels, with 243 paylines. The game was released in December 2017, so came out just over 3 decades after the original film appeared. It uses HTML5 technology, so can be played on devices of diverse types and sizes. You can certainly play the Highlander slot on your mobile phone without its quality being affected. There is also an autoplay feature, as well as a turbo play option if you want to speed up the action.

The minimum bet in the game is 40p, while the maximum is £30 per spin. There is therefore the potential to bet big and win large prizes, if you feel that you can trust your luck to hold.

What is the Highlander Slot RTP?

The RTP of the Highlander online slot is 96.62%, which is on the high side of average for a slot of this type. Many of Microgaming’s slots are at about the same level of RTP, though. Battlestar Galactica, has an RTP of 96.60%, while Hellboy stands at 96.94%. Their Game of Thrones 243 Ways slot, in contrast, has an RTP of 95.00%, which is one of the lower ones for Microgaming.

Of course, basing a slots strategy on RTP is flawed, so it is also worth knowing that the game has a low to medium variance. This means that the game is likely to produce smaller, more frequent payouts for you. We certainly found this to be the case when we tried the game, as it proved quite tricky to trigger the feature, but plenty of small wins did come our way.

How Does the Highlander Slot Game Look and Sound

The reels are set in front of a backdrop of the Scottish Highlands, appropriately enough, with dark stormy skies sitting above wild mountains and a stone wall. This is one of Microgaming’s branded slots, so it uses actual character images from the movie. In this respect, it is just like other Microgaming slots like Battlestar Galactica and Bridesmaids.

The music mimics that of the film, and some 1980s type rock plays when you spin in a win. There are lots of hair metal electric guitar flourishes to help capture the 1980s movie atmosphere. The music is certainly atmospheric and well-produced, but it does get a little wearing after a few minutes and we suspect that you will be clicking the mute button if you play the game for any significant length of time.

The lower value symbols on the reels are the number 10 and the letters A, K, Q, and J. They are not especially impressive, visually speaking, and certainly not as detailed as the game’s higher value symbols. These are characters from the movie, and actual movie frames are used as the basis for the images. You’ll see two versions of Conor MacLeod (one 20th century and one 16th century), as well as his nemesis The Kurgan, Brenda Wyatt and Heather MacLeod.

The symbols will turn into animated movie scenes at certain times, with actual movie footage rather than cartoon images being used. This is a very impressive touch, and adds a real touch of class to the game. The action on the reels is smooth and slick, as you would expect from one of Microgaming’s branded slots. Overall, the game looks and sounds impressive, though the lower value symbols are a little plain in design when compared with the character animations of their high value equivalents.

The wild symbol is the Highlander’s claymore, or great sword, and this will substitute for all other symbols to create winning combinations for you. The only symbol it cannot replace is the scatter. The scatter is the kilt pin brooch, and we’ll take a closer look at that in the next section of this Highlander online slot review.

There are two bonus features in the Highlander online slot. One of them is a basic free spins feature. While we were a little disappointed that there was not more depth and variety when it came to the features in a branded slot, there is still some solid enough entertainment on offer, as well as plenty of chances to win, in the two features.

It’s All About Quickening Wilds in the Highlander Slot

This Highlander online slot review will conclude on a positive note by saying that we were impressed with aspects of this game. It certainly looks good, and the incorporation of animated sequences using symbols on the reels was a superb touch of detail. The features are a little flat, but the quickening wilds add some excitement to proceedings.

If you’ve been impressed with Highlander, then Microgaming has a large range of other branded slots on offer. You might well want to try their Lord of the Rings slot. If you’re a fan of slots based on 1980s movies then Terminator 2 is also well worth a look.

🎬What does ‘There can be only one!’ refer to?
The movie’s tagline refers to the concept in the movie that the immortals, of whom Conor MacLeod is one, must all meet and do battle at some stage in the future. They will fight until there is only one of them left. This belief is behind much of the plot in the movie, where MacLeod must face his nemesis The Kurgan. The line also appears in the Queen song ‘A Kind of Magic’ that appears during the movie’s closing credits.
🎰How do I find a casino where I can play Highlander slot?
If you want to find an online casino where you can play Microgaming slots like Highlander then your best bet is to check back at this website as often as possible. We feature an up-to-date list of casinos that offer Microgaming slots. As the list is being added to all the time it is a good idea to check back here as often as possible. You can also check to see which casinos are offering the most tempting welcome bonuses.
🏆Where can I find the values of the symbols in the Highlander slot?
If you want to discover the relative worth of each of the symbols on the reels in the Highlander slot game, then you can click the game’s info tab. That will display a pay table that shows you what each symbol is worth, including the scatter and the wild. If you spin in 5 of the scatter symbol you will collect a win worth 100x your stake as well as trigger the bonus feature.