Nektan has a reputation for producing games that look cheap and cheerful but can be played perfectly on your mobile phone. With Gunslingers Gold, they have had a crack at producing a Western-themed game that deploys classic themes like gunfighters, bank heists and poker games that end violently.

So has Nektan succeeded in producing a Western classic? Or have they just churned out more filler for their catalogue? Read this Gunslingers Gold slot review to find out! 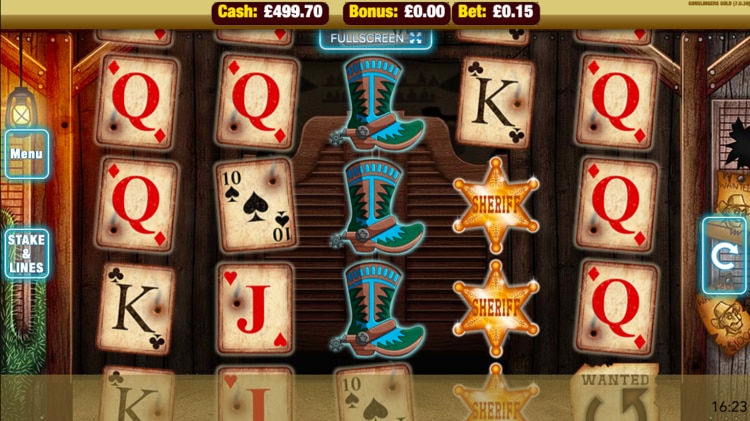 Nektan released Gunslingers Gold in November 2015, so it has been around for almost half a decade now without ever becoming hugely popular. It is played on a grid of 5 reels and 3 rows that has 15 paylines. As you would expect from a Nektan game, it is optimised for mobile devices, thanks to its use of HTML5 technology. Producing games that work perfectly on mobile devices is one of Nektan’s main objectives, so this is not surprising.

The minimum bet in the game is 0.01 coins, and the maximum is 15. Unusually perhaps, there is no autoplay option available in the slot. There is a turbo play button that you can use if you want to speed things up a bit. We found that it had a little discernible effect on the game when we tried it out, though.

What is Gunslingers Gold RTP?

The RTP rate in Gunslingers Gold is 96.60%, which is relatively high for a game of this type. Dead or Alive, another Western-themed game from Net Entertainment, for example, has an RTP of 96.82%. Most other Nektan slots are above the 96.50% mark, with titles like Mayan Marvels and Dragons Dynasty also being at 96.60%.

Of course, basing your slots strategy on RTP is never the wisest move. Most experienced slots gamers will also take into account the variance of a slot. Gunslingers Gold is a medium variance slot, so your wins should be spread pretty evenly in terms of size and frequency. There should certainly be enough action to keep you involved. When we played the game we racked up plenty of small wins but found it quite tricky to trigger the feature.

The Gunslingers Gold game looks and sounds like a typical Nektan slot. If Gunslinger Reloaded from Play’n GO is a classic Western movie like ’Once Upon a Time in the West’, then Gunslingers Gold is more like a cheap 1970s TV show. The game’s graphics are comic book in style, but we’re talking The Beano rather than a gorgeous graphic novel.

The reels are set in front of the old-style swinging doors to a saloon. Wanted posters, cacti and bullet holes adorn the frame of the doorway, making at least a token attempt to immerse the player in the world of the game. The graphics are very simple and lack detail. This means, of course, that their quality does not change whatever size of screen you are playing the game on.

When it comes to sounds, the only real effect used in the game is some music. This plays when the reels spin and bears a passing resemblance to the soundtrack of 1960s spaghetti westerns like the original version of Django and A Fistful of Dollars. If you’re expecting Ennio Morricone, though, you will be disappointed. This is a typical Nektan game when it comes to sound, and so the music sounds cheap and garish. You’ll be reaching for the mute button rather than your earphones when you play Gunslingers Gold.

The symbols on the reels are all related to the Western theme. The lower value symbols are playing cards that run in value from 10 to Ace. They have some nice touches of Old Western detail to them. The higher value symbols are all things from America’s frontier days, and you’ll see spurred cowboy boots, a bag of stolen gold, a sheriff’s badge and a cartoon gunslinger. The most valuable symbol is the game’s logo. If 5 of these appear on a payline you can pick up as much as 500x your stake as a prize.

The game’s wild symbol is a charging bull, and he will substitute for all standard symbols to create winning combinations for you. The game’s scatter symbol is marked Spins, so it’s easy to spot. It’s also easy to see that plays a key part in the game’s free spins feature, something we’ll take a look at next.

The Gunslingers Gold slot does not have an especially rich array of bonus features on offer. Again, this is pretty typical of Nektan’s slots. This is a developer that likes to keep its slots as simple as possible. While this means that they can be played readily on your mobile device, it does also make their games less engaging than those from other developers.

The same is true of Gunslingers Gold. The game has 1 bonus feature, which is free spins. There is nothing else to look out for. In order to pick up to 30 free spins, you need to keep your eye on the spins symbol. This is decorated like an Old West wanted poster and has the word ‘Spins’ on it, so it’s easy to spot. You can retrigger the spins if 3 symbols spin in at any time during the feature, so the potential for big prizes is pretty huge if you enjoy a bit of luck.

We were disappointed, though, that there were no other aspects to this feature to add a little more variety and complexity. When you compare this game to a slot like Gunslinger Reloaded, which involves a shootout with a bandit as part of its bonus features, Gunslingers Gold does appear limited. Free spins are very pleasant, but we were left wanting a little bit more when we played the game.

If you’re familiar with Nektan’s other games, this should not come as too much of a surprise to you. This is a developer that likes to keep its slots as basic and as simple as possible, and you’ll not find lush graphics, sweet sounds or captivating bonus features in any of their games. But their games do work well on mobile and can be played by even the most naive slots gaming novice, so they certainly fill a gap in the market.

We’ll conclude this Gunslingers Gold slot review by saying that this game was everything that we would expect from a Nektan slot. It is not a game that looks to be innovative in any way. It is not packed with entertainingly complex bonus features, for example. But it is a decent enough, basic slot that offers plenty of chances to win prizes.

We would, though, recommend that you look out for Gunslinger Reloaded from Pragmatic Play if you’re fond of Western-themed games. But if you want something dead basic to play on your phone and fill a few minutes Gunslingers Gold will fit the bill. If you want something a little more engaging, you should probably look elsewhere.

🎰How can I find out the values of the symbols in Gunslingers Gold?
One feature of the Gunslingers Gold game that is very useful is the menu tab. If you click on this before you play then you can find out the values of all the symbols used on the reels. There, you’ll see that the game’s logo pays 500x your stake if 5 of it spin in on a payline. But the pipe-smoking gunslinger is also valuable – 5 of him will bring you a prize of 450x your stake.
🎰Can I play Gunslingers Gold 2 anywhere?
We have not seen a sequel to Gunslingers Gold anywhere at the moment. This is not to say that Nektan will not produce one in the future, though. If you really enjoyed Gunslingers Gold, though, and you’re seeking out a similarly basic Western-themed slot, you should give Gold Rush from Pragmatic Play a go, or perhaps Reel Outlaws from Betsoft. If Gunslingers Gold 2 is ever released, though, we’ll be the first to let you know!
🎰Is it easy to change the bet sizes in Gunslingers Gold?
Yes, all changes can be made to your stake sizes by using the stakes and lines button on the game’s main screen. This is located at the left of the screen, underneath the menu button. Although the interface is a little awkward and clunky, the process is simple enough. This game lacks some features, such as autoplay, due to its simplicity, but it is easy enough to change your bet sizes.

Deal or No Deal: What's in Your Box Slot Review