Saddle up and Ride into Town for the Gunslinger Reloaded Slot

Buckle on your shooting irons and saddle up your faithful mount for this slot from Play’n GO. Gunslinger Reloaded is another slot that is set in the Wild West, and it certainly hits the target when it comes to bonus features. You’ll feel as though you’re in streets of Laredo in 1880 with the superb graphics and sound too!

Read this Gunslinger Reloaded slot review to discover all you need to know about this slot, which also offers you the chance to win a lucrative progressive jackpot prize pot. 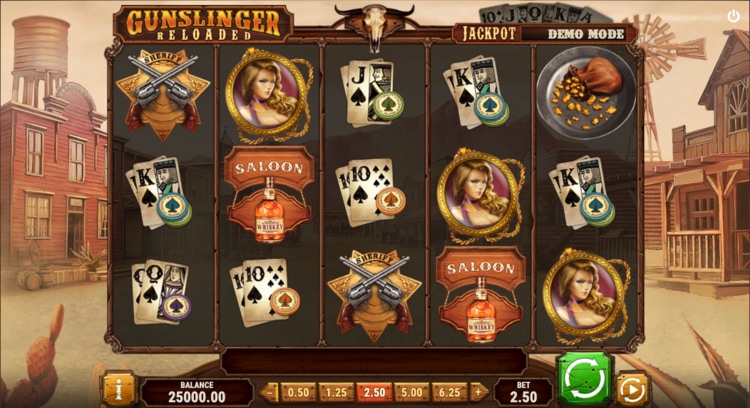 Get the Key Details of the Gunslinger Reloaded Slot Machine Here

The Gunslinger Reloaded slot is played on a grid with 5 reels and 3 rows. There are 25 paylines, and the minimum bet allowed is 0.25 coins. The maximum bet is 100 coins. The biggest win you can collect is a massive 500,000 coins. An autoplay function is in place. You might want to use this too, as the game’s graphics and sound are well worth just looking at and enjoying. The game was released in October 2018, so it is a relatively recent addition to the Play’n GO catalogue.

The RTP of the slot is 94.64%, which is somewhat lower than many other games of this type. That is due to it having a progressive jackpot, though. It is a medium variance slot, so your chances of picking up plenty of small wins on a regular basis should be about the same as your chances of getting the really big wins less often.  When we played the game we found it pretty easy to trigger the bonus features, as well as pick up smaller wins quite frequently. This felt like a game that treats players very fairly when it comes to your chances of winning.

The reels are set in a wooden frame that stands in front of an Old Western street scene. The scene contains plenty of detail, and certainly looks impressively authentic. Wooden buildings frame the dusty street, and we can see cacti on either side of the reels. The colours are yellow and brown, and look authentically dusty and dry.

The sound effects are suitably dramatic and are complemented by the music. The musical accompaniment is pretty effective too and sounds a little like the works of Ennio Morricone. The Italian composer provided the soundtrack to many of the more famous ‘spaghetti westerns’ of the 1960s and 70s, including “A Fistful of Dollars” that made a star of Clint Eastwood. It certainly helps to create an immersive atmosphere, and is better than the music that you find in most other slots.

The detailed and sharp approach to graphics in the Gunslinger Reloaded slot continues with the symbols on the reels. The lower value symbols are the typical range of number and letters associated with playing cards that you see in many slots. The game uses depictions of playing cards for these symbols, which adds another nice touch that is perfect for the Western setting. They also play a part in one of the game’s bonus features, which we’ll tell you all about later.

Enjoy the Detailed Graphics in the Gunslinger Reloaded Slot

The higher value symbols also reflect the game’s Western theme. You’ll see a sheriff’s badge adorned with a pair of crossed six-shooters, a beautiful Western barroom belle and a rearing white mustang on the reels. All are brilliantly detailed and look very classy. Gameplay is slick and smooth too, and the game has a very high-quality feel to it.

The Gunslinger himself is the game’s wild symbol, and he will substitute for all other symbols, apart from the three scatter symbols, to create winning combinations for you. There are playing card symbols, whiskey bottles and wanted posters that act as scatters. These trigger the game’s bonus features, and we’ll take a closer look at them later on in this Gunslinger Reloaded slot review.

This is one of the better Wild West games that we have seen for graphics and sound. It certainly compares favourably with other Western slots, such as Next Gen Gaming’s Wild West, or Net Entertainment’s Dead or Alive.

The Gunslinger Reloaded Slot Shoots on Target with Bonuses

Play’n GO can usually be relied upon to provide some extra entertainment when it comes to bonuses, and the Gunslinger Reloaded slot certainly delivers in this regard. There’s not just 1 bonus for players to enjoy but 3. We’ll take a look at all of them here for you. As we mentioned earlier, it’s the game’s 3 scatter symbols that you need to watch out for when it comes to the game’s bonus features.

When it comes to the Gunslinger Reloaded slot bonus features, you can certainly find plenty to get stuck into. This game really delivers excellent entertainment in its 3 bonus games.

Overall, this Gunslinger Reloaded slot review has to conclude with a ringing recommendation of this game. The 3 bonus features pack in plenty of entertainment as well as prize-winning potential. The game also looks great, with all of the symbols on the reels being wonderfully detailed. Fans of Western movies will also note the tribute to Ennio Morricone in the game’s music.

So, make sure you check out the Gunslinger Reloaded slot at your favourite online casino as soon as you can. This is a game that will have you coming to back to it time and again. This is one of our favourite slots and we’re sure it will be one of yours too.

🎰Was there another Gunslinger slot?
Yes, there was. Gunslinger Reloaded is a revamped version of the original Gunslinger, which was also a Play’n GO slot. You will see reviews of the original game online if you’re curious about it. We have to say, though, that the Reloaded version of the game really builds on the original, improving it and sharpening things up considerably. Make sure you find the Reloaded version at your favourite online casino.
🤔Are the 3 outlaws in the Gunslinger Reloaded slot based on real people?
The 3 outlaws are fictional characters, but their names are similar to real Western outlaws. Kid Curry rode with Butch Cassidy’s gang, while Wild Bill Hickock was one of Deadwood’s gunslingers. Jesse James was a notorious outlaw in Missouri during the later 1860s. All were ‘interesting’ characters who died violently. Someone involved in the creation of this game definitely knew a bit about Western outlaw history and chose the names of characters well!
🎰What is the most valuable symbol in the Gunslinger Reloaded slot?
The game’s gunslinger symbol functions as the wild, but he can also bring you a massive win. If 5 gunslingers appear on a payline then you will win 1000x your stake. It is also worth looking out for the charging mustang symbol, as this pays out 375x your stake for 5 appearing on a payline.