Goldorado is everything but an ordinary slot. This Pariplay game has two separate sets of reels, with a bonus spiting totem in the middle, which can trigger special Mirrored Wilds and Symbol Swap features. Apart from the highly unusual setup, this game also comes with the unique free spins feature that includes added wilds and multipliers. To learn everything there is to know about this highly unusual Pariplay title, take a look at our Goldorado slot review, where we reveal everything you'll need to know before starting to play. 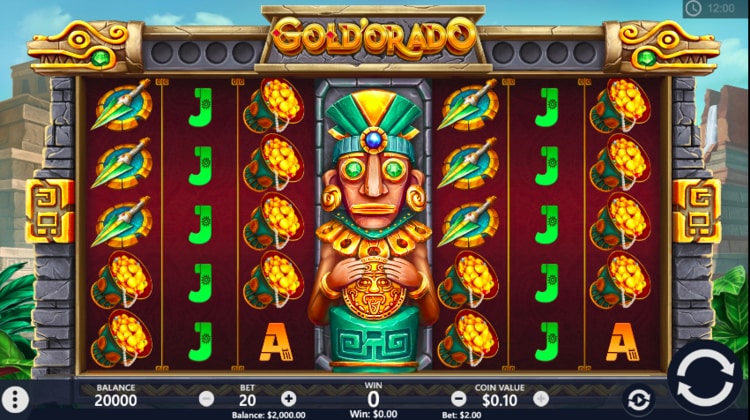 As we mentioned above, Goldorado comes with not one but two sets of reels. Both grids are 3x5 with 25 paylines each. The number of ways to win is fixed, meaning that you can't change it manually. Be free to tackle this slot on any mobile device, but we recommend you to play it in landscape mode since the game is very wide because of the double grid.

You can start spinning the Goldorado slot for as little as £0.20. However, the max limit of £20 is very low for today's standards. There are many games where you can bet even over £100 per turn, so highrollers may want to proceed with some more flexible slots.

Autoplay is fantastic in this game. Not only that you can place between 10 and 100 auto-spins, but there is also an option to program it to stop when:

With an RTP of 96%, Goldorado is perfectly in line with the market average. This makes it good enough for all casual players, but in case you want to spin a single slot for a longer time, it may be better to go with some of the more favourable games, such as NetEnt's Kings of Chicago or Yggdrasil's Jokerizer. This slot comes with medium variance, meaning that you'll get a fair amount of wins in the base game, while still having a solid chance of landing a huge prize during the bonus round.

Goldorado is inspired by the culture of the South American Indians. The name of the game is a clear reference to an ancient legend about the golden city of El Dorado. The whole game is very bright and colourful with jungle and ancient temples in the background. It features a cartoonish, but very crisp looking artwork. The reels have a fantastic design with lots of details and classic Aztec or Mayan decorations on them. There is a golden totem between the reels, which will come to life from time to time and grant you different bonuses, but more on that in the bonus section.

You'll hear Native American music playing in the background, together with the sounds of birds and animals. The soundtrack is not that impressive, but it will make you feel like you're spinning the reels in the middle of the South-American jungle. The whole decor of the Goldorado slot looks very much like something Iron Dog did with their Aztec Wilds slot. In case you're a fan of slots with multiple set of reels, we recommend you to take a look at Spartacus Gladiator of Rome by WMS.

Apart from the usual redesigned card signs and numbers, you'll also find many custom-designed symbols spinning on the reels. There are items like totems, trinkets, swords and pots of gold all included in the game. They are also inspired by the ancient South-American culture and have a distinctive, colourful design that perfectly follows the overall look of the game. The Wild is just a golden symbol with the word 'WILD' written all over it, while the Free Spins symbol is a golden coin.

The Goldorado slot comes with single free spins round and a several special features available in the base game. All of those features have very unusual mechanics, meaning that you won't find them at many other slots.

During the base game, the Golden Totem that separates two sets of reels will come to life and activate one of the Totem Features. These bonuses are activated randomly, meaning that you can get them on any given turn.

To start the free spins round, you'll have to collect 8 Free Spins symbols during the base game. Every Free Spins symbol you get is stacked on the meter above the reels, so you can easily keep track of your progress. Once you trigger the bonus game, two sets of reels will merge into a single 5x6 grid. After that, you'll get to choose between 3 amulets to uncover 10, 15 or 20 free spins.

During the bonus round, the totem can randomly award Wilds with 1x, 2x, 3x, or 5x multiplier on them. Also, keep in mind that you can retrigger this feature by collecting another set of 8 Free Spins symbols for up to 40 bonus games in total.

Goldorado was very fun to play because of its unique design and great bonus mechanics. The main bonus feature gets you up to 20 free spins and awards several wild symbols and multipliers. The totem makes sure that there is enough action happening in the base game as well, with its randomly triggered Mirror and Swap features. All of this, in combination with mesmerising graphics and smooth gameplay, should be enough to thrill even the most seasoned casino lovers.

In case you are one those players who prefer classic looking slots, you probably won't fancy this game. However, if you're in for an adventure, the Goldorado is the slot for you.

🎰How many reels are there in the Goldorado slot?
The Goldorado slot features 2 sets of 3 reels, with each one of them having 5 symbols slots and 25 paylines. However, once you enter the free spins game, the reels will join to form a single 6x5 grid with 50 ways to win.
💰What are the bet limits in the Goldorado slot?
You can stake anywhere between £0.20 and £20 per spin when playing the Goldorado slot. The minimum bet is in line with what other similar slots have in place. However, the maximum limit is quite lower than the market average.
📊What is the Goldorado slot variance?
The Goldorado slot comes with the hit rate of 29.4%, so we can put it in the group of medium variance slots. It means that you'll get a winning payline in roughly one-third of your spins. However, games like this also leave enough room for you to get lucky and land a huge single payout during some of the bonus rounds.