There are dozens of slots that use Chinese culture as a theme, so we were not expecting much that was original when we first took a look at Golden Lotus from Red Tiger Gaming. We were in for a pleasant surprise, however. This is a gorgeous looking game that offers some great features, such as locking wilds.

You can read this Golden Lotus slot review to find out just why we were so pleasantly surprised by this highly entertaining and immersive game. 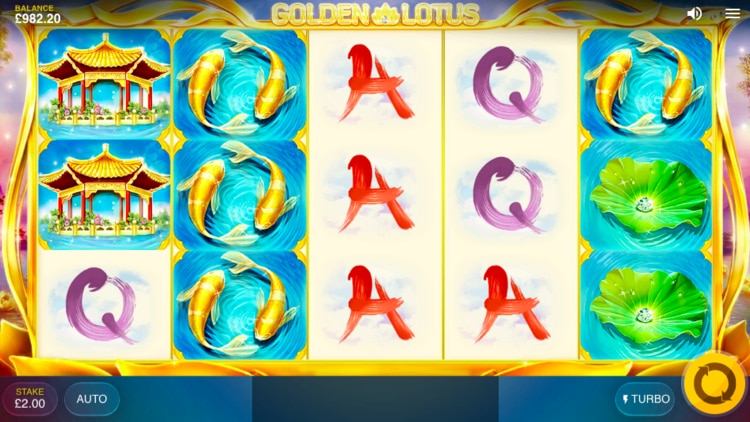 The Golden Lotus slot is played on a grid with 5 reels, 3 rows and 20 paylines. The game was released by Red Tiger in May 2016 and is available in 27 languages, including Korean, Spanish and Russian, as well as English. The minimum bet for UK players is usually 20p and the maximum is £20. The game can be played on mobile devices without there being any compromise in overall quality. There is an autoplay option that can be used if you want to watch the action take place, and a turbo button if you like things to be a touch quicker.

If you like to base your slots strategy around stats then you might also be interested to know that this slot has high volatility. This means that you could be in for a few nail-biting thrills while you wait for the big wins to come in. You’re more likely to be picking up those infrequent big wins than plenty of small wins on this game. While nothing can ever be set in stone when it comes to slots, this tallied with our experience when we tried this Red Tiger gaming slot. We did find that triggering the feature could be tricky, though. Quite often 2 scatters would spin in for us, then we’d be tantalised while the other reels spun, only for the third scatter to refuse to appear.

One thing that is immediately noticeable about the Golden Lotus slot game is just how visually appealing it looks. This is a very tastefully designed game in terms of how it looks. The reels are set in an ornate golden frame that hangs over what looks to be a lily pond. The symbols on the reels are displayed on a background that resembles the paper used in traditional Chinese lettering and artwork.

An appealing Chinese musical soundtrack plays when you spin the reels, and this is very pleasant. It certainly doesn’t jar on the ears in the way that the music from many other slots does. Indeed, this game is very easy on the eyes and ears overall, with tasteful graphics and pleasing sound. What is most pleasing, certainly on a visual level, is the sense of space on the screen. This is not a game that looks cluttered or overambitious.

The graphics are simple enough, but they look really effective. This light touch approach also extends to the animation. The symbols move slickly and smoothly on the reels and there is nothing clumsy or awkward about the game’s action.

The symbols on the reels fit in with the game’s theme perfectly. The lower value symbols are the letters J, Q, K and A, and the number 10. They are rendered in an almost beautiful style, though, as watercolour, Chinese style painted symbols. The higher value symbols are a lily pad, koi carp and a golden pagoda. Again, they are beautifully rendered in gorgeous colours.

The game’s wild symbol is the golden lotus of the title. As well as substituting for all other symbols to create winning combinations for you, it also locks into place. We’ll give you more details about how this works, along with the significance of the game’s bonus symbol, in the next section of this review.

There are 2 features for you to enjoy in this game. One of them relates to the golden lotus wild symbol, while the other is all about the game’s scatter. The scatter symbol is easy to spot, as it is a beautiful woman dressed in traditional Chinese garb, holding a parasol. We’ll take a closer look at both of these features here.

We will end this Golden Lotus slot review on a positive note by staying that we loved this game’s fresh feel, tasteful graphics and locking wilds feature. We did think that the free spins feature could have offered a little more depth to keep us entertained, but that’s a minor quibble. We were very happy overall with this slot, and recommend that you try it.

If you enjoy playing slots with a Chinese theme, you might also want to have a go on Pragmatic Play’s Journey to the West. Alternatively, Wishing Tree from Merkur, or 4 Seasons from Betsoft, might also be games that you’d find enjoyable.

🎰Is there a version of the Golden Lotus slot for Android?
While there is no version of this slot that is specifically designed for Android devices, the game works well on mobiles. You can play the game on your tablet or phone, whether it uses an Android or iOS operating system. Red Tiger state on their website that they take “pride in ensuring the compatibility of our games across a vast variety of mobile devices and operating systems, new and old, so everyone can enjoy our games.” So you can rest assured that this game works on your Android device.
🎰What is the most valuable symbol on the reels in the Golden Lotus slot?
The highest paying symbol in the Golden Lotus slot is the wild symbol. The golden lotus of the game’s title not only replaces other symbols and locks into place, but it can bring big rewards of its own. If 5 golden lotus symbols appear on a payline you will win 800 coins. A full paytable can be found in the game itself. There, you can see what each symbol is worth and also how the game’s paylines are structured.
🎰Are there any other Golden Lotus slot games available?
If you’re asking this question, you clearly enjoyed this game as much as we did. We’re sorry to report that there are no other Golden Lotus slot games currently available from Red Tiger. They do, though, produce several other games with a Chinese theme. You might want to try Dragon’s Luck Megaways, Imperial Palace or Lion Dance if you enjoyed Golden Lotus. They look just as good and come with entertaining bonus features too.