Ancient Egypt is a recurring theme among online slots creators, but even in such a tight competition, Quickspin managed to come up with a unique and highly appealing game. Everything about the Golden Glyph slot is bigger than average, from the 7x7 matrix to 5 different bonus features. The game has a single free spins round with theoretically unlimited multipliers, while the Tumbling Reels Feature makes this slot even more dynamic. In case you want to learn more about how all of these bonuses and special features work, check out our Golden Glyph slot review. 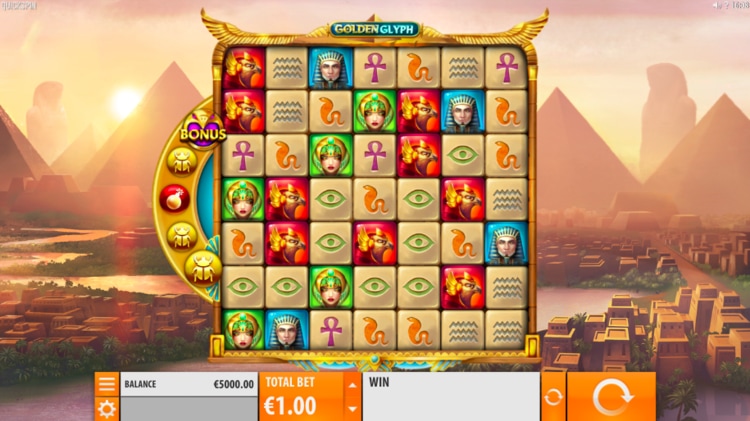 Golden Glyph is played over a huge 7x7 matrix. It features a cluster format, meaning that you'll be paid every time there is a group of 5 or more adjacent symbols. There is also one extra reel on the side, but it's reserved for the Power-Up symbols only, which we will talk more about in the bonus section.

The stake range is in line with the industry average on both the lower and the higher end. You can wager from £0.20 to £100 per spin, so we believe that almost every casino player will be able to find a suitable bet.

The game is playable on both desktop computers and mobile devices. But in case you're one of the people who like to play on a smaller screen, our recommendation is to play in landscape mode since Golden Glyph uses such a big grid.

In case you want to speed things up, note that there is a quickspin feature included. You'll also find an autoplay option available, which allows you to set up to 1000 automated spins. To program it when to stop, just click on the 'advanced' button in the autoplay menu.

With an RTP of 96.19%, Golden Glyph is barely above the market average. In case a high return to player rate is what you're looking for, then slots like Jokerizer by Yggdrasil or Simsalabim from NetEnt may be a better choice. It's also important to mention that Golden Glyph is a medium volatile slot game. This means that you'll enjoy quite regular wins, while still having a chance to land huge awards with some of the bonus features.

There is no doubt that Golden Glyph is one of the most visually stunning slots to ever come from Quickspin's workshop. The massive 7x7 grid looks stunning with its golden Egyptian-styled decorations and many small details. The background is a beautiful landscape with a river, an ancient town and pyramids rising in the background.

There are just a few discrete animations, such as the river gleam and birds flying over, meaning that they won't distract you from the game. Colours are bright and vibrant, so you'll get a feeling like you're spinning the reels during a sunset in the middle of the Sahara desert.

The soundtrack is an Egyptian-sounding tune. It's upbeat and very engaging, so it's safe to say that most of the players will find it fitting for a game like this. There are also lots of nice audio effects when you get a winning combination or trigger one of the bonuses.

If you want to try some other Egyptian slot with sharp graphics and unique gameplay, we recommend Cygnus slot by ELK. For players who are more into classic looking games, both Rabcat's River of Riches and Play n' Go's Legacy of Egypt would be great choices.

All of the symbols in the Golden Glyph slot are custom made, meaning that there are no generic card symbols and numbers. You'll find an array of Egyptian-themed symbols spinning on the reels, such as hieroglyphs, ankhs and pharaohs, with Horus being the highest-paying one. There are 7 special symbols in this game, which is more than you'll find in almost any other game. We will talk about each one of them in more detail down below.

You trigger the bonus rounds by combining the Power Wild with one of the Power-Ups. But before we dive into the special symbols, it's important to mention that this game comes with the Tumbling Reels Feature. Each time there is a winning combination, all of the symbols from that cluster will be erased, and then new ones will cascade from above to fill the gap. The feature retriggers as long as there are new winning clusters popping up.

Apart from the special bonus symbols, The Golden Glyph slot also features the regular Wild, which can substitute for any other symbol on the reels.

Each time the Tumbling Reels feature is activated, the Power Wild will show up in one of the empty slots just before new symbols appear. The Power Wild does everything the same as the regular Wild. The only difference is that each time it's a part of the winning combo, the Power Wild will also trigger one Power-up from the side reel. Note that after each turn, a new set of 5 Power-Ups will show up. This is what you can get:

The new Golden Glyph Wild will appear on the first free spin. Note that this symbol randomly switches position after each turn. It also comes with a win multiplier, which starts with 1x but increases every time the Golden Glyph Wild is a part of a winning cluster.

The Golden Glyph slot is exceptional in almost every way. It comes with several unique bonuses that make this game so fun and engaging. The main bonus round includes both free spins and high multipliers, which in combination with the Power-Up feature can easily skyrocket your winnings. The only problem with Golden Glyph is that all those special features can be a bit too overwhelming for novice casino players. But for everybody else, the Golden Glyph slot is a must-try!

Legend of the Pharaohs Slot Review