Go Mining for Free Spins in the Gold Rush slot

If you’ve ever fancied yourself as a miner during a gold rush, then you might want to have a spin or two on the Gold Rush slot. Pragmatic Play have developed this game, which is based on a theme of gold mining in the days of the Old West. The game features an interesting twist during its free spins bonus round. You should not confuse this game with the Playson slot of the same name. To find out more about the game’s bonus features and everything else, read this Gold Rush slot review. We’ll tell you all you need to know and more! 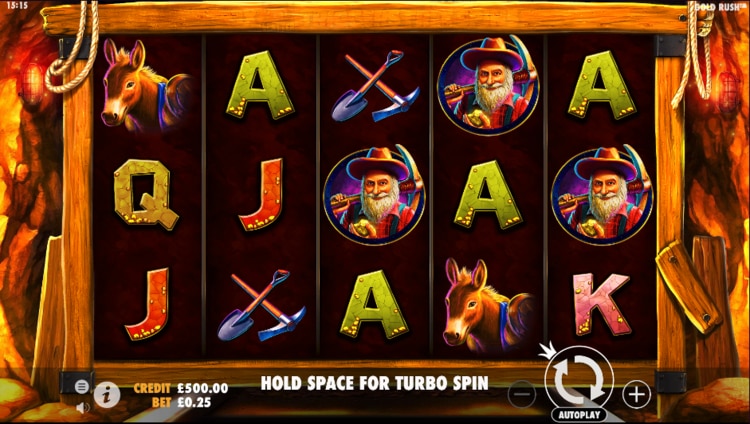 Gold Rush is played on a grid with 5 reels, 3 rows and 25 paylines. The minimum bet that you can place is 0.25 currency units, and the maximum is 125. The maximum win that you can take home is 2500 coins, which you win if you place the maximum bet per line and the highest value symbol spins in. You can find out about what the symbols are later on in this Gold Rush online slot review.

However, you should be aware that the bearded miner is the most valuable symbol on the reels. If 3, 4 or 5 of him appear on the same payline, you will win 1, 8 or 20 times your total stake. This twinkly eyed, white bearded chap is certainly worth more than his scruffy hat, shirt and dungarees would suggest!

With an RTP of 96.50%, Gold Rush is dead on average when it comes to payouts. Sure, there are slots out there with higher RTPs, but we can’t honestly complain about an RTP of 96.50%.

Graphics and Sound in the Gold Rush Slot

When you open up Gold Rush, you are greeted with a view of the reels framed in an old mine. Lanterns flicker amid rackety beams, and ropes hang from the corner of the reels’ wooden frame. The symbols on the reels move very smoothly, and gameplay is slick and quick. The graphics are rendered in a cartoon style, and look good without being outstandingly detailed.

The music and the sound effects in this game are well worth noting, certainly when compared to other gold rush slots. The music is a country style tune, defined by a driving banjo sound. Apparently, according to some reports, Nik Robinson, the CEO of Pragmatic Play, used to play the himself. We really hope this is true, even if it’s not! The music is certainly of a higher standard than you will find on most slots. That does not mean that the mute button might still beckon after a few minutes of it, though.

The sound effects in this Gold Rush online slot are really good, we have to say. The ambient noises of the mine, like the drops of water and the clink of tools on stone, are sharp and accurate. They really help to create an immersive experience when you’re playing the game. We have to say that this game emerges with lots of credit when it comes to how it looks and sounds.

What are the Symbols on the Reels in the Gold Rush Slot Machine?

The sticks of dynamite are the game’s wild symbol, and they will substitute for all other symbols, apart from the scatter, to produce winning combinations for you. Unlike in other slots games from Pragmatic Play, such as Dragon Kingdom, the wild symbol does not have any value in its own right.

The scatter symbol is easy to spot, as it is a picture of a mine tunnel with the word ‘scatter’ emblazoned across it. This symbol can appear on only the middle 3 reels, and if it lands on reels 2, 3 and 4 on the same spin, you will trigger the game’s bonus feature. We will take a closer at the bonus feature in the next section of this Gold Rush online slot review.

Bonus Features in the Gold Rush Online Slot – Watch for the Golden Nugget!

So, when you have successfully spun the three scatters in on reels 2, 3 and 4, what happens next? The first thing is that you will be awarded 10 free spins. That number can increase, though, if more scatter symbols appear on the reels. Each additional scatter symbol that appears during the free spins will award you an additional two free spins. This means that you can soon pick up plenty more free spins and boost your chances of winning.

Significantly, an extra symbol is added to the reels during the free spins round. This is the golden nugget, and you need to keep a close eye out for it. Every time one of these appears on the reels, it is added to a meter that sits just above the reels. The more of these nuggets you collect, the more of the high value miner symbols will appear on the reels.

There are four levels to the bonus game in total. You can see them on the table below:

Obviously, having more of the high value symbols present on the reels boosts your chances of picking up more big wins. If you manage to climb up a level on the last of your free spins, an extra free spin is awarded. As we have stated previously, any scatters that appear during the free spins round will give you 2 more free spins.

We think that this is quite an interesting bonus feature, and it certainly has more depth and interest to it than those in other Pragmatic Play games, like Dragon Kingdom. This feature is much more like the one found in Pragmatic Play’s Pirate Gold, in that it offers a bit more interest than just free spins alone.

Get Digging for Nuggets with the Gold Rush Online Slot

Overall, we have to say we are pretty impressed with Gold Rush. We’re ending this Gold Rush online slot review recommending that you give this game a try. It sounds really good, for one thing, especially the sound effects. The music is little bit better than in many other slots games too.

The bonus feature offers some interest without becoming overcomplicated, and we have to say that this game would suit novice to moderately experienced slots players. Veterans might want a game with a slightly more involved bonus feature, such as Vikings V Trolls, another Pragmatic Play slot.

But if you fancy a trip to the Old West and want to mine some nuggets, Gold Rush could be the perfect game for you. Give it a try!

🎰 Are there any other Gold Rush slots?
Yes, there is also another Gold Rush slot. Pragmatic Play produced the game that we have reviewed here. The Playson game has an entirely different feel to it, and you get to blow things up with a detonator. The main character is a pretty rough looking miner too, unlike the cuddly character in the Pragmatic Play game. The Playson game is not a Gold Rush 2 slot or a sequel to the Pragmatic game, though, which is a common misconception.
🆓 Is there a Gold Rush slot free play option?
Yes, you can find a Gold Rush slot free play mode at the official Pragmatic Play website. You may also be able to play the game for free in demo mode at your favourite online casino. Playing in demo mode is a good idea if you are unfamiliar with the game. You can practice your strategy and find out the nuances of the bonus feature before committing any actual money.
📱Can I play Gold Rush on my mobile?
As you would expect from a forward-thinking developer like Pragmatic Play, you can play Gold Rush on your mobile device. Pragmatic is a developer that uses HTML5 technology, meaning that their games can be played on devices of different sizes, and on iOS or Android phones and tablets. You may need to use your earphones to experience the games great sound effects, but the graphics certainly looked sharp when we tried it on our phone!