Games of Thrones by Microgaming

The Game of Thrones slot is the official game for the iconic television series from HBO. Created by Microgaming in January 2015, there are 2 versions. One has 5 reels and 15 paylines whilst the other has 5 reels and 243 ways to win. Choose which House of Westeros you want to serve as you pick from 4 free spins features which offer multipliers up to 5x and House Sigil symbols which are stacked up 6 high. With an RTP of up to 95.07%, you can win up to 20,250 x your stake on every free spin. 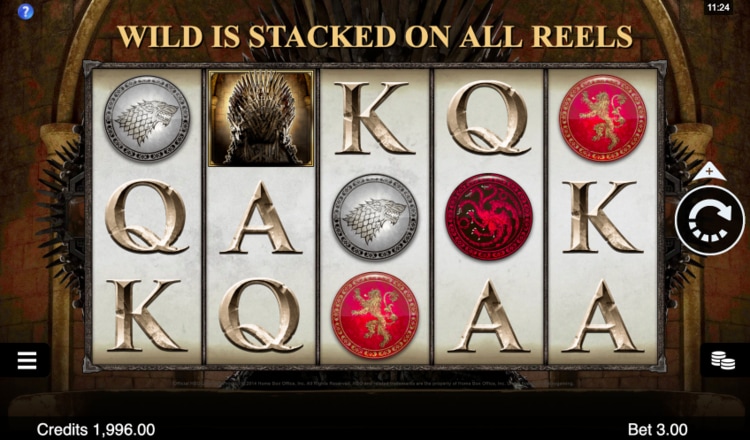 There are essentially 2 Game of Thrones slot games. With both of them played across 5 reels and 3 rows, one of them has 15 paylines whilst the other has 243 ways to win. To form a win:

With each version, the minimum and maximum bet per spin varies too:

You can use the Quick Spin mode to speed things up if you wish. There is also a very basic Autoplay function where you opt between 10 and 100 spins to play automatically. Unlike newer online slots, there are no other metrics like loss limits or single win limits.

Both Game of Thrones slots are medium variance games. This means that you’ll get mainly smaller sizes wins throughout the game and features. It does allow for big payouts too, especially in the free spins features. In the 15 payline version, you’ll get a win in 21.71% of your spins. It increases to 27.97% for the 243 ways to win version.

Game of Thrones can provide wins of 20,250 x your total bet on every free spin. This will come in the Baratheon Free Spins feature. For more details on payouts per spin or free spin, scroll down.

Being an official branded online slot, the RTP is lower than more normal online slot games. This is due to licensing costs which the developer (Microgaming in this case) need to factor into the maths. The RTP for both versions sits just above 95%:

The Game of Thrones slot is the official game for the HBO Game of Thrones television series. Inspired by the bestselling book series by George R.R. Martin, you head to King’s Landing as the backdrop is the much-coveted Iron Throne.

You will hear the Game of Thrones main title theme, which was composed by Ramin Djawadi playing in the background, the visuals are quite basic and tame compared to the series’ action.

On the reels, you will see low-value A, K, Q and J royals. The 4 main symbols are represented by the 4 major Houses of Westeros – Targaryen, Stark, Lannister and Baratheon. The Game of Thrones logo symbol is the wild which substitutes for all symbols except the Iron Throne scatter. The wild can also appear stacked on all 5 reels. This is important as it’s the highest value symbol.

Being an official Game of Thrones slot, you would have hoped for an expect characters such as Jon Snow, Daenerys Targaryen, Arya Stark and Tyrion Lannister to appear as symbols. Due to licensing issues we assume, they don’t. You will have to make do with the official title theme.

The Game of Thrones slot is available to play across desktop, mobile and tablet devices. If you own an iOS, Android or Windows-powered device, you’re in luck.

Game of Thrones comes with a total of 5 bonus features. To play any of them, you will need to land 2 or more Iron Throne scatters anywhere on the reels. 4 of them give you free spins with multipliers.

Landing 2 Iron Throne scatters will trigger the Scatter Bonus feature. This rewards you with a bet multiplier and is a small consolation for missing out on that third and all-important scatter.

Game of Thrones comes with 4 free spins features – based on the 4 main Houses of Westeros. To access them, landing 3 or more Iron Throne scatters anywhere in view. Also, 3, 4 or 5 scatters will add a 1, 20 or 200 x bet boost to your balance.

Each House (of Westeros) offers a different number of free spins, multiplier and stacked symbols.

Conclusion: Some of the Highest Payouts

Game of Thrones is an iconic show with countless awards and regarded as one of the best television series of all time. Whilst the online slot version doesn’t hit those dizzy heights, it offers payouts of up to 20,250 x your bet on each Baratheon free spin. Not many slots can match or come close to this figure.

The 243 ways to win version is superior to the 15 payline version in terms of payouts, RTP and hit frequency. Make sure to choose the Baratheon Free Spins feature as 1 lucky free spin with the 5x multiplier could be all it takes for you to feel like you’re sitting on the Iron Throne.