Venture to Ancient Egypt with the Eye of Horus Slot

Ancient Egypt has proved fertile soil for games developers when it comes to slots, and Merkur’s contribution to the range of games that use pyramids and ankhs is Eye of Horus. We were expecting sweeping sounds and mysterious desert symbols. That was not quite what we found with the Eye of Horus slot, however.

Read this Eye of Horus slot review to see what we thought of Merkur’s trip the desert pyramids! Is it a superb slot or just a victim of the mummy’s curse? 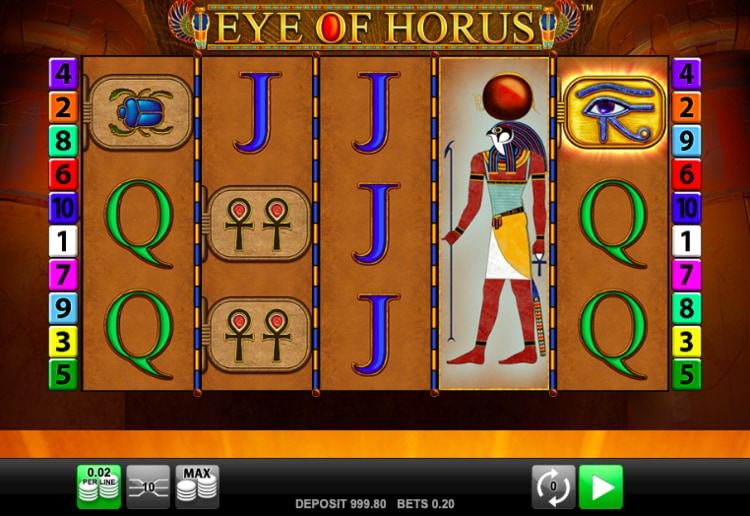 The Eye of Horus online slot is played on a grid with 5 reels, 3 rows and up to 10 paylines. The number of paylines can be selected by clicking the relevant button on the screen during play. The game was released in September 2016, which surprised us a little, given the game’s basic design when it comes to sound and graphics. When we opened the game and played it we expected it to be much older than that.

There is an autoplay button that you can use to keep the reels turning automatically. UK players can usually bet from 1p to £20 per spin, though this may alter depending on which online casino you are playing at. The maximum win available is 10,000x your bet. You can change your bet size very easily by clicking on the coins icon on the screen while you play.

What is the Eye of Horus Slot RTP?

The slot is low to medium variance, which means that smaller, more frequent wins are likely to what you collect for long periods. The features and their attendant big wins were somewhat tricky to trigger when we tried the game. It certainly took a little patience to wait for the feature to arrive.

The Eye of Horus game has a very basic look to it. The reels are set in a very simple grid format against the backdrop of the sandy coloured walls of an Egyptian tomb. There is very little detail to draw you into the game’s world. The screen is uncluttered and simple, so it is easy to follow the action. Some tabs in the top right corner of the screen give you the chance to access the game’s pay table and other information.

The sound in the game is similarly basic and simple. There is some music that plays when the reels spin and other tunes that sound when you record a win, or play the bonus feature. It sounds like music from a 1980s video game. Bleeps and quite harsh electronic notes are used, and it does not sound contemporary at all. If you like retro gaming, though, you’ll probably really enjoy its kitsch qualities.

Egyptian Gods Act as the Eye of Horus Slot’s Symbols

The lower value symbols on the reels are the letters J, Q, K and A. There is nothing particularly remarkable about the way these letters are designed. The higher value symbols are a little more interesting, however. These are hieroglyphic symbols and you will see a blue scarab beetle, two ankhs, Horus himself, Anubis and some fans. The detail on these symbols is not impressive, and they look almost cut and pasted onto the reels. There are many aspects of this game’s design that look a little bit cheap.

Horus the bird-headed god is the game’s wild symbol. He can replace all other symbols to form new winning combinations for you apart from the scatter symbol. The wild also expands to cover several spaces on the reels, something that can help to bring you bigger wins. The golden pyramid is the game’s scatter symbol. This plays a crucial part in the game’s main bonus feature, which is something that we’ll look at in the next section of this review.

Gamble Your Wins and Enjoy Some Free Spins

If you’re playing Eye of Horus online, you’ll notice that there are two bonus features for you to enjoy in the Eye of Horus slot. One is a simple gamble feature while the other provides you with free spins. We’ll take a closer look at both of those features here.

The gamble feature is a nice touch that can be found in other Merkur slots such as Vampires. The free spins feature can be lucrative, but you need to have some patience while you are waiting for it to be triggered.

Eye of Horus is a disappointingly simple and basic slot. The graphics look poorly designed and lack any real charisma or individuality. The game’s music is unappealing and dated. This Eye of Horus slot review will, therefore, conclude on a pretty negative note. We can’t really recommend this game, as even its bonus features seem limited and overly simplistic, especially in the way they are animated. While its retro vibe may be appreciated by some, we found that the game just looked cheap and not especially cheerful.

If you like slots with an Egyptian theme, you might be better off checking out Book of Ra Deluxe from Novomatic, or perhaps Cleopatra from IGT.

🎰What is the Eye of Horus?
The Eye of Horus is an Ancient Egyptian symbol of royal power and protection. The symbol would sometimes be painted on the bows of their ships by Ancient Egyptian sailors as a way of granting their vessels divine protection. May Egyptian funerary amulets were made in the shape of the Eye of Horus.  The symbol does appear on the reels in the Eye of Horus slot game. If 5 of it appear on a payline then you will win a prize worth 10 coins.
🎰Are there any other Eye of Horus slots?
Yes, there is another game called Eye of Horus. It uses the Megaways concept and its developer is Blueprint Gaming. Obviously, its theme is pretty much the same as the Eye of Horus slot that we have reviewed here, and it looks very similar too. The games are different, though, especially when it comes to the number of paylines on offer. Thanks to Megaways, Blueprint’s game has possible 15,625 ways to win.
🎰Are there any Eye of Horus slot tips you can give me?
When it comes to playing this game as successfully as possible, the gamble feature is key. Every time you spin a win in on the reels, you have the chance to gamble it. There is little skill involved in the gamble, but you need to use your judgement carefully. Always check your bankroll and make a decision based on that. You do not want to lose more money than you can afford by making silly choices when it comes to gambling your winnings.