The South American jungle has proven rich terrain for slots developers when it comes to finding settings for their games. ELK Studios have contributed to this genre of slots with their game Ecuador Gold. If treasure hunting in amongst mysterious temples amidst thick foliage is your kind of slots thing, then this might just be the game for you.

Read this Ecuador Gold slot review to find out if this game is up there with greats like Gonzo’s Quest, or just ended up losing its way on a distant jungle track. 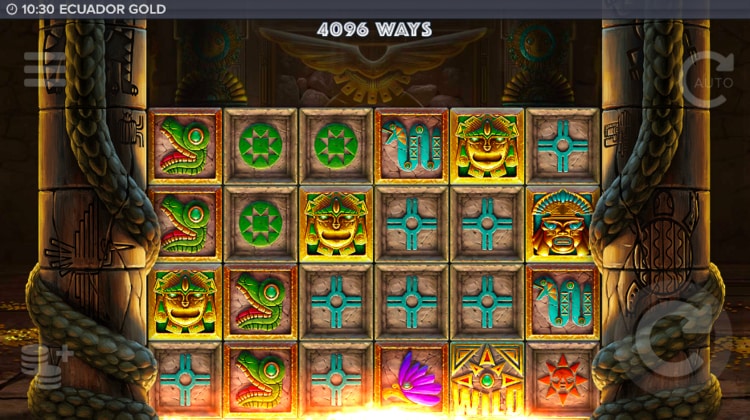 The Ecuador Gold slot is played on a grid with 6 reels and 4 rows. There is a huge number of paylines available, with the total ranging from 4,096 up to 262,144. This is due to its use of Avalanche mechanics, something that we will discuss later on in this review.

The minimum bet for UK players is usually 20p and the maximum is £100. This might vary slightly according to the casino at which you are playing, however, so always check with your operator. There is an autoplay option available if you like to take a more passive approach when it comes to slots. The maximum win you can pick up is 250,000 coins.

The slot can be played on a wide range of mobile devices, thanks to its use of HTML5 technology, so firing it up on your phone or your tablet will not be a problem. Ecuador Gold is a relatively new slot on the scene, having been released by ELK in February 2019. If you click on the pile of coins icon in the bottom left corner of the screen you can change your stake. You can also see some suggested strategies from ELK.

The RTP of the Ecuador Gold slot is 96.10%. This puts the game into a pretty typical range for a slot of this type. It also falls into a pretty standard range for slots from ELK Studios. Their Cygnus slot, for example, also has an RTP of 96.10%, as does Ice Wolf. Joker Gems and Hong Kong Tower both have an RTP of 96.30%. Many other slots from ELK fall into this range too.

If you’re the type of slots player who likes to use stats to drive their strategy then you will be keen to know that this a high volatility slot. Lower value wins are likely to be pretty infrequent, so you need to stay attentive and wait for the big wins, especially when the feature kicks in. ELK give this game a volatility rating of 8 out of 10 on their official website.

Symbols Slide in Front of a Slick Temple Scene

The reels are set in a front of a detailed temple backdrop. This is, apparently, the long-lost Temple of Luck. Two burning torches stand on either side of the reels, adding to the atmosphere of mystery.

Two stone pillars hold up the reels, with rope coiled around them as though an adventurer has just climbed down into the temple. The way the reels spin is little different to most other games too. Rather than rolling around reels, the symbols slide into place on a grid. The animation is smooth and slick, and the game looks really appealing when you click on the spin button.

The game’s sound effects also contribute to creating an immersive atmosphere. The music is suitably dramatic, and it is clear that, as with other ELK games, some time was spent on it in order to produce something that is pretty high quality, especially when compared with the music you usually find in slots.

Other sound effects help to add to the immersive atmosphere without being especially noteworthy. ELK Studios like to produce games with high-quality graphics and sounds and this game certainly fits into their catalogue well in this regard.

All the symbols on the reels relate to the game’s theme of hunting jungle treasure in some way. The low-value symbols are Aztec-style stone carvings in green, blue, purple and orange. There are some symbols of moderate value too. These are animals, shown as Aztec-style religious icons. You’ll see alligators, snakes, birds and jaguars.

The golden carvings of gods are the game’s high-value symbols. The character Kane, the treasure hunter of this slot’s story, is also a symbol. If 6 of him appear on a payline you will collect a prize worth 3 times your stake.

It is important to note that the Ecuador Gold slot game uses Avalanche mechanics. Symbols can also appear stacked on the reels, as we have noted, meaning that your chances of winning big prizes are further boosted. The Avalanche mechanics mean that every time a win slides into place on the reels, the symbols that created the win disappear. New symbols replace them, hopefully giving you an additional win. This process is repeated until no new wins occur. It is possible to go on a long streak of wins thanks to this aspect of the game. We’ll look at the game’s bonus features in the next section of this Ecuador Gold slot review.

This game is packed with interesting bonus features, so it is important to look out for the wild and scatter symbols that play a part in triggering them. You also need to watch out for the super, mega and epic symbols of size 2x2, 3x3 and 4x4 that can drop down when the symbols start avalanching. They can produce even more big wins for you.

The game’s bonus scatter symbol is an image of a temple staircase with an explorer waiting at the bottom to climb it. The wild symbol is easy to spot as it is the word wild emblazoned across an Aztec symbol.

We really enjoyed plenty of things about this game, so this Ecuador Gold slot review will conclude on a very positive note. The game looks really impressive, and the animation is very smooth and slick. We also liked the excitement that the Avalance concept helps to generate, especially when we went on a streak of wins.

If you enjoy games with a South American jungle theme, you might want to check out Spirits of Aztec from Playson, or perhaps Aztec Power from Novomatic. The classic Gonzo’s Quest is, of course, a great game for anyone who wants to go into the jungle in search of treasure.

📈Are there any betting strategies I should follow in the Ecuador Gold slot?
You can actually find some strategy tips in the game itself. ELK like to offer their players a few tips as part of the game. If you click on the pile of coins in the bottom left corner of the screen during the game you can find these tips. They are not especially sophisticated, but they do give you advice about how different bet levels can affect your chances of winning so they are worth checking out.
📱Is the Ecuador Gold slot game any different on mobile devices?
This slot should look exactly the same on your phone or tablet as it does on your desktop. This is because it uses state of the art web technologies that include support for canvas and WebGL. This ensures that your mobile gaming experience is just as good as playing on your laptop or desktop computer, with the same great graphics and sound.
🎰How does the number of rows relate to the number of paylines in the Ecudaor Gold slot?
As the number of rows on the grid increases during certain parts of the game, the number of paylines rises as follows: