Dwarf Mine Slot by Yggdrasil

Dwarf Mine from Yggdrasil is another slot that uses mining for its theme. This time, though, it’s not wild west miners hunting for frontier gold, it’s those sturdy chaps from the worlds of Tolkienesque fantasy, the Dwarves. The diminutive chaps with their thick beards are digging for gems in this game, using a special drill that can help bring you some big prizes.

So read this Dwarf Mine slot review to find out whether this is the type of underground adventure you want to go on! 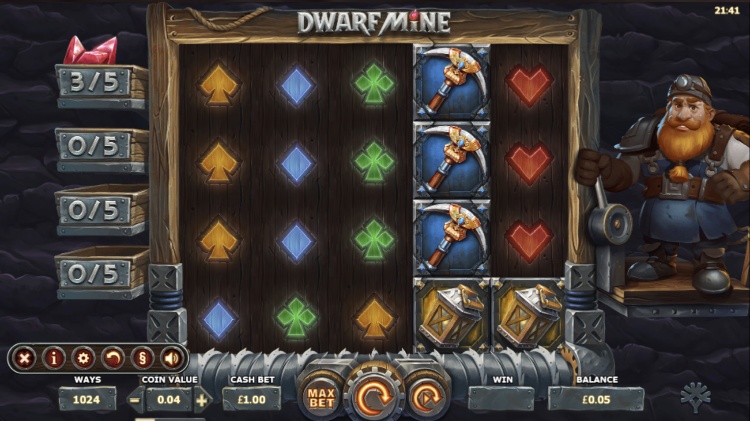 The Dwarf Mine slot is played on a grid of 5 reels and 3 rows, and there are 1024 paylines. That number can rise to 16,807, though, which is something that we’ll take a closer look at later on in this review. The free spins feature expands the reel set. The maximum win available is 3,904x your bet or £250,000, whichever comes first, though this may vary slightly from operator to operator. Bet levels range from 10p up to £125.

There is a very detailed information section in the game. You access this by clicking the plus sign in the bottom left corner of the screen. You can find a full paytable there, as well as plenty of detailed information about how the game’s features work. You can also change the game settings via this tab. We were impressed with the level of handy knowledge on offer here.

The RTP for the Dwarf Mine slot game is 96.80%. This is quite high for a slot of this type, and fairly high for a Yggdrasil slot too. Other Yggdrasil slots with comparable RTP rates include Baron Samedi (97%), Fruitoids (96.70%) and Holmes and the Stolen Stones (96.80%). If you like to base your slots strategy on the stats, then it’s worth knowing that the game has a medium variance.

The slot was released in March 2019, so has not been on the slots scene for that long, relatively speaking. As with all Yggdrasil games, it is optimised for mobile devices, thanks to its use of HTML5 technology. You can play it on Windows, Apple and Android devices. If you prefer to play on your desktop device, it can be played using most well-known browsers, including Edge, Firefox and Chrome. The game resolution is 16:9.

We were very impressed with the way that the Dwarf Mine game looked and sounded. There is a smoothness to the animation as well as a quality to the detail of the graphics that put this game on a level above most slots that you’ll find.

A dwarf miner stands to the right of the reels, and every time you click the spin button he pulls a lever, which is a nice touch of detail. The reels are set on a wooden frame in a mine, and the background is simply the shaft in which the dwarf miner is working.

The symbols on the reels are pretty simple but still impressive in their design. The lower value symbols are playing card symbols rendered as gemstones. The hearts are rubies, the clubs emeralds, the diamonds are sapphires and the clubs are yellow opals.

There are 2 types of higher paying symbols. There are super high paying gemstones in the same colours as the playing card gems. You will also see items associated with mining used as higher value symbols, and these include a miner’s helmet, a lamp, a pickaxe and a shovel.

The sound effects in the game are pretty standard, really, though they are certainly of a high enough quality for us to not be too critical. There are some appealing clicking noises as the reels spin, while the music is a dramatic, cinematic sort of tune. You’ll probably end up muting it if you play for a long period.

There is no wild symbol in the game. The dwarf’s drill functions as the scatter, though, and this works as the bonus symbol that triggers 2 of the games features. We’ll take a look at the plentiful bonus features in the Dwarf Mine slot game next.

Expand Reels and Collect Crystals for a Variety of Wins

Another aspect of this game that we really enjoyed was the variety of bonus features on offer. Yggdrasil tends to pack their slots with features and the Dwarf Mine fruit machine certainly does not disappoint in this regard.

For this feature, you need to watch out for the dwarf’s drill symbol. This bonus symbol can only appear on reels 1, 3 and 5. It can also only appear in the base game, so don’t bother waiting for it when the free spins are in operation. Every time it appears on the reels, it expands the reel set by 1 row for that spin. It can appear a maximum of 3 times, so the number of rows can be expanded by a maximum of 3 too. The symbols on these extra rows are placed randomly.

If 3 of the drill symbols appear anywhere on the reels you will trigger the Free Spins feature. You receive 10 spins on an expanded 5x7 reel set. This boosts the number of paylines to 16,807. There are no bonus symbols or collectable crystals on these reels, though. The spins are played with the same size bet as was in place on the activating spin.

This is something to watch out for when the expanded reel set is in operation. The Collectible Crystals will appear on the extra rows during the base game. Each of the crystals can land only once on each spin. When one appears, it jumps onto the collection shelves on the left of the reels. When a box of a certain colour of gems fills up, you’ll receive 5 free spins, with extra high-value symbols of the same colour as the relevant gems added to the reels. As a new player, you are awarded 3 red crystals at the start of your session of play.

If you complete one of the crystal collections then, as we stated above, you receive 5 free spins on a special reel set. There are no bonus symbols or collectable crystals on the new reels. The super high paying symbols that populate the reels more than compensate for this, though. These spins are played with an average coin value of the coin values that were in operation on the spins where the crystals were collected.

Slot Verdict: A Rich Seam of Entertainment for You to Dig

This Dwarf Mine slot review is going to conclude on a very positive note, as we really enjoyed this game. It is packed with bonus features that go way beyond basic free spins, and the gem collection added a nice extra touch of excitement to things The graphics and sound help to give this game a real touch of class, and we recommend that you give it a try the next time you take a trip to your favourite online casino.

If you like games about miners or dwarfs, then you might want to also try Dwarfs Gone Wild from Quickspin, Dwarven Gold from Pragmatic Play or Diamond Mine Megaways from Blueprint Gaming.

🎰What is the difference between the Free Spins and the Collection Free Spins in the Dwarf Mine slot?
The normal free spins are triggered by the bonus drill symbol appearing on the reels, while the Collection Free Spins kick into life when you have completed a collection of crystals. Both types of free spin take place on special, though different to each other, reel sets. During the normal free spins, there are no collectible crystals or bonus symbols on the reels. Extra high value symbols populate the reels for the Collection Free Spins.
💰Can I retrigger the Free Spins feature in the Dwarf Mine game?
No, you can’t retrigger the feature and collect more free spins, unfortunately. This is because there are no bonus symbols on the reels on the expanded reel set that is used during the Free Spins feature. There are many more paylines in operation, though, so your chances of picking up big wins during the feature are pretty good, as long you enjoy a bit of luck. The Collectible Crystals also offer some more variety.
💎Can I complete more than one collection of Collectible Crystals at the same time?
Yes, you can collect more than one set of crystals at a time. If you complete more than one then they are awarded to you in the following order: green, yellow, blue and red. You are more likely to complete the red crystal collection first if you are a new player, as you are awarded 3 red crystals to begin with. Red is the least valuable of the 4 available colours.