Durian Dynamite isn't just another fruit slot. This game comes with exceptionally smooth gameplay and a couple of unique bonus features that include free spins and dynamite reels. But the most appealing feature are the Exploding Durian Wilds that burst and award you many additional wild symbols. But is this game as great as it seems? To get an answer to that and every other question about this Quickspin slot, check out our Durian Dynamite review where we reveal everything you'll need to know before playing. 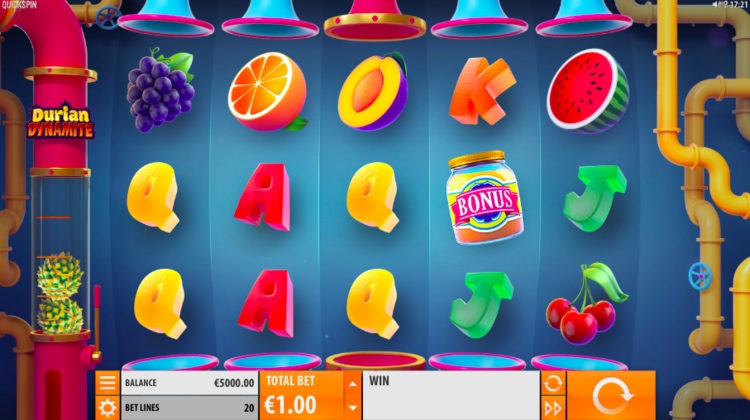 The Durian Dynamite slot uses the most basic 5x3 set up we all have seen so many times before. It features 20 paylines, but note that you can't change that number on your own. All of you who tend to get bored of pressing the 'spin' button all the time should know that Quickspin included an advanced autoplay feature in this game. The maximum number of automated spins is 1000. For more options, such as loss and win limits, click on the 'advanced' button in the autoplay menu.

The betting range is also in line with industry standards. You can wager anywhere between £0.20 and £100 per spin, so we believe that almost any player will be able to find a sweet spot. More and more casino lovers each year decide to play slots on smartphones and tablets, so Quickspin made sure that Durian Dynamite is available on both iOS and Android devices.

The Durian Dynamite slot won't blow your mind with its barely above the average RTP of 96.22%. In case the return to player rate is a deal-breaker for you, note that there are lots of games with way higher RTPs than this. Some of the best examples are Jokerizer by Yggdrasil and Kings of Chicago by NetEnt, which both have RTPs somewhere in the neighbourhood of 98%.

You should also know that Durian Dynamite is a highly volatile slot game, so don't be surprised if there are many empty spins. Games like this are more prone to giving a couple of huge wins rather than lots of small ones.

This is one of the smoothest slots we have ever reviewed. There are no actual reels, but rather than that, symbols look like they're blown out and sucked back into tubes. The most mesmerising part is when the Dynamite Wilds get launched on the reels. It all feels so sleek that you would wish to keep spinning just to see those rich 3D animations over and over again.

Everything is very bright and colourful, just as you would expect from a fruit slot. You'll see lots of yellow, red and blue pipes in the background, as well as the Dynamite Supply reel on the left, which we will talk more about in the bonus section.

The graphics are great, but the soundtrack is even better. While spinning the reels of the Durian Dynamite slot, you'll listen to funky background music that will make you crank up the volume even higher. The rest of the audio effects in this game are also very good. They have a bubbling sound to them, which perfectly follows the overall atmosphere of the game.

Because all of this it's safe to say that Durian Dynamite is one of the best fruit slots we have seen in a while. If you already enjoyed playing some of the similar games like Opal Fruits from Big Time Gaming or NetEnt's Fruit Spin, we are sure that you'll adore this one as well.

As you could probably guess by now, all of the highest-paying symbols in this slot are fruits, such as watermelons, plums, cherries, oranges and oranges. The Durian symbol that is cut in half acts as the Wild symbol, while the whole during is the Exploding Wild. Another symbol you should keep your eyes on is the Jar Bonus Scatter that triggers the free spins round, but more on that in the following paragraph. Rest of the paytable is loaded with lower-paying card symbols and numbers that are redesigned to follow the cartoonish look of the game.

Durian Dynamite comes with 1 free spins round and a couple of other bonus features. The half-cut durian is not only the highest paying symbol in the game, but it also acts as a Wild that substitutes for all other symbols in the game apart from the Bonus Scatter.

This feature continues until you run out of Exploding Durian Wilds on the Dynamite Supply meter found on the left side of the screen.

You'll need 3 Jar Bonus Scatters on reels 2, 3 or 4 to trigger the bonus round. It awards 6 free spins, but you'll get a chance to win up to 30 additional spins in the Free Spins Upgrade Picker feature. Just before the round starts, you'll be moved to a new screen where you'll get between 3 and 6 free picks to uncover some of the following bonus upgrades:

It looks like Quickspin spared no resources on this one. Durian Dynamite captivates with its audiovisual, and it maintains the excitement high with its bonus games. The bonus features are innovative, and, at times, rather rewarding. You can land up to 36 free spins in a single batch, but that's not the biggest feature you'll find here. The Durian Dynamite slot is all about Exploding Wilds that will burst and scatter even more Wild symbols all over the reels. This feature can trigger even during the base game, meaning that there will be lots of things going on even before you enter the main bonus round. We recommend this slot to seasoned and novice players alike, so feel free to visit some of the Quickspin online casinos and check it out yourself.