Dragon’s Luck Megaways is a Chinese-themed slot from Red Tiger Gaming. It is a very simple game in many ways, with few bonus features and no collapsing reels, even though it uses the Megaways concept.

This Dragon’s Luck Megaways slot review will take a closer look at this game for you. Read on to discover whether or not this slot is a true trip to the misty and mysterious mountains of China. 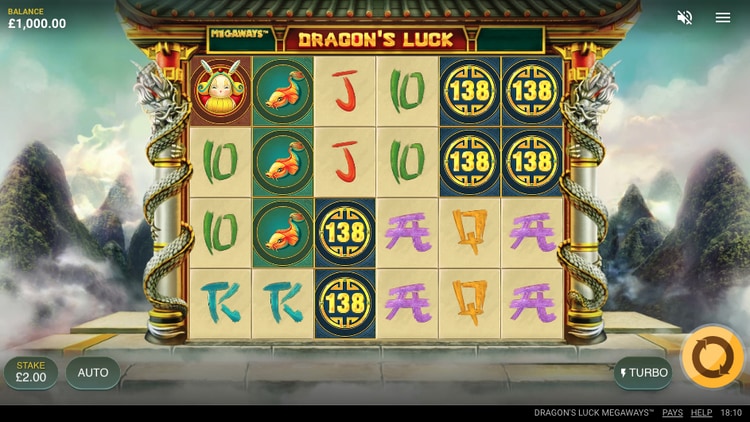 Basic Facts about the Megaways Slot

The Dragon’s Luck Megaways slot is played on a grid of 6 reels and 7 rows that features as many as 117,649 paylines. Unlike other slots that make use of the Megaways feature, this game does not feature collapsing reels. This disappointed us a little bit as collapsing reels always make for more entertainment in our view. You can play the game on a wide range of mobile devices, thanks in part to its use of HTML5 technology.

There is an autoplay button, and this can be adjusted to be in use for a specified number of spins, or to end when you have lost a specific amount of money. The minimum bet that you can place is 20p per spin, with the maximum being £10. The game’s calculated maximum multiplier is 10,368x, according to the game stats on the Red Tiger website. This slot is a relatively new addition to Red Tiger’s range, having been released in October 2019.

The RTP of the Dragon’s Luck Megaways slot machine is 95.69%. This is perhaps a little on the low side for a slot of this type, but is not an untypical figure for one of Red Tiger’s games. Other Red Tiger titles with a similar RTP rate include Dynamite Riches (95.70%), Eagle Riches (95.68%) and Rio Stars (95.73%).

The game has high volatility, with Red Tiger awarding it a rating of 5 out of 5 for this aspect on their website. You can find out plenty of useful details about the game by clicking on the ‘Pays’ and ‘Help’ tabs in the bottom right corner of the screen.

The reels in the Dragon’s Luck Megaways slot are framed with ornate carvings of dragons that look quite impressive. Less impressive is the backdrop to the reels, which is an indistinct grey scene that kind of evokes a mountain top temple, but it’s hard to tell. The symbols do not spin on reels, but rather slide on what looks like the kind of paper surface on which Chinese calligraphy is practised. The game does not look too ornate or fussy, but there is a certain lack of detail to the graphics too that slightly disappointed us.

A busy, Chinese-themed musical soundtrack plays that is not unpleasant. This is complemented by twinkling and jingling sound effects that play when you record a win on the reels. A swishing sound plays when the symbols on the reels slide into place. This helped to draw us into the world of the game a little more, but the atmosphere cannot really be described as immersive.

The symbols on the reels all reflect the game’s Chinese theme in some way. The lower value symbols are the number 10 and the letters, J, Q, K and A all rendered in a Chinese style. The higher value symbols are a lotus flower, a koi carp and a Chinese doll. The most valuable in the game is the 138 coin that pays 38x your stake for 6 appearing on a payline.

The symbols all look effective enough without having any particularly outstanding features. You can find better graphics in other Oriental-themed slots. Somewhat strangely, there is no wild symbol in the game. There are various coin symbols, though, that trigger the game’s somewhat limited range of bonus features. We’ll take a closer look at those next.

It’s all about the Coins

If you enjoy slots packed with free spins and engaging bonus features then it is fair to say that the Dragon’s Luck Megaways slot game should possibly not be first on your list. There is no free spins bonus feature at all, and the other features are a little limited in scope, as you can read here.

The Dragon’s Coin symbol works a little bit like a mystery symbol. When the symbol appears on the reels it will spin. When it does this it will reveal a random symbol. All the Dragon’s Coins on a spin will turn into the same symbol. Obviously, when this happens it can create several winning combinations for you.

This is a variation on the Dragon’s Coin feature. In this variation, the coins appear stacked as 2x2, 3x3 or 4x4 super symbols. These super symbols then split into several Dragon’s Coins, which then spin to transform into the same symbol. This feature can populate the reels with plenty of matching symbols and is well worth watching out for. Given the games high volatility, you sometimes need a little patience waiting for the Dragon’s Coin and Mega Coin features to kick off, though.

In this feature, you need to keep an eye on the carvings of dragons that adorn each side of the reels. If some Dragon’s Coins spin in on the reels then the two dragons may come to life and breathe fire across the reels. This transforms the Dragon’s Coin symbols once again, into higher value symbols, and you take both sets of wins. This can be quite lucrative, if you enjoy a little bit of luck.

The animation for this little sequence is quite impressive, and one of the more visually appealing aspects of the game. The flames look quite real, and the way that the dragons change colour is a nice touch of extra detail. Sadly, that was really the most excitement that we could find when it came to features in this game. There is very little entertainment on offer, really, with these bonus features and it would have been nice to have the prospect of some free spins or similar to keep our attention on the game.

This Dragon’s Luck Megaways slot review will close on a slightly negative note. We were really disappointed that the game used Megaways but did not utilise collapsing reels, and also that there was no free spins feature present. The features that were present were enjoyable enough, but lacked substance. Like other Red Tiger slots, this game promised much but did not really deliver, and it was a bit basic in its approach to appeal to us. If you like simple slots, though, you might well find plenty to enjoy here.

For other Chinese-themed games, we recommend that you try Double Dragons from Yggdrasil, 4 Seasons from Betsoft or possibly Koi Princess from Play’N GO.

🎰Are there any free spins on offer in the Dragon’s Luck Megaways slot machine?
This is another Red Tiger game, like Legendary Excalibur, that does not have a free spins bonus feature. This is unusual for a slot that deploys the Megaways concept. You cannot even trigger respins via the game’s bonus features, so if free spins are something you value in a slot you should look elsewhere. This is a real drawback of this game, in our view, as we enjoy triggering free spins!
❓Do wild and scatter symbols play any kind of role in the Dragon’s Luck Megaways slot?
This game does not feature wild or scatter symbols at all, something that makes it highly unusual. This is a very simple slot where you really have to focus on the symbols on the reels bringing you wins rather than hoping to trigger complex bonus features and free spins. The coin symbols are the ones to watch out for, although they do not act in the way that you would expect from a conventional wild or scatter symbol.
💷How can I win in the Dragon’s Luck Megaways slot game?
As there is no free spins bonus feature or anything similarly exciting in this slot you need to watch out for the special symbols if you want to collect the really big prizes. It’s all about the coins in this slot when it comes to generating big wins. If you can collect enough Dragon’s Coins, especially the super stacked versions of them, then the larger wins will come your way.