Fantasy and epic adventures in imaginary lands are a common theme for slots these days, and Pragmatic Play’s Dragon Kingdom is another to add to the collection. The main character is a sexy female warrior, and there are plenty of great looking dragons around too. This game should not be confused with the Playtech slot of the same name. In this Dragon Kingdom slot review you can find out everything you need to know about this entertaining game. Read on to discover more! 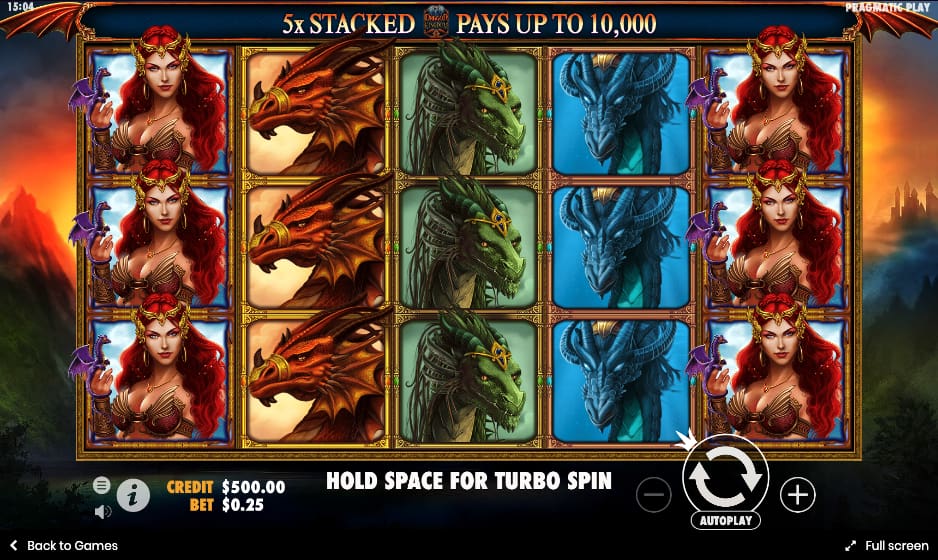 Dragon Kingdom is played on a 5x3 grid, and there are 25 paylines. The minimum bet that you can place is 0.25 currency units and the maximum is 125. The maximum win you can pick up is 1000 coins. There is an autoplay option available if you like to sit back and be a spectator rather than clicking your screen constantly.

All the symbols can appear stacked during the base game, opening up more possibilities for wins. When the symbols stack, there is a nice bit of animation too, with the dragons coming to life. This is one the game’s more impressive features, with the stacks giving players the chance to boost wins in a game that can sometimes seem a little limited in terms of chances to win big prizes.

Significantly, you only need to land 2 of the game’s character symbols – the warrior or the dragons – on a payline to record a win. We will take a closer look at the symbols on the reels later on in this Dragon Kingdom slot review, but for now all you need to know is that the most rewarding symbol is the female warrior.

Pragmatic Play’s Dragon Kingdom has an RTP of 96.47%, landing it straight into the industry average. This means that we can consider Dragon Kingdom to be a medium volatility slot, which means that your chances of picking up small wins are pretty much the same as larger wins.

So, what does Dragon Kingdom look and sound like? We have to say that the images of the dragons are among the most detailed and beautifully rendered we have seen on a slot. They really do look great. They don’t do a lot, though, which is perhaps significant with this slot, as it looks great but there is not a lot of depth to it.

The suitably dramatic musical soundtrack is enjoyable enough, at least for a few minutes. Like the music for most slots, though, it might get somewhat irritating after a while and the mute button will beckon. The other sound effects in the game are functional and effective, without being outstanding.

This is a game that looks great at the start, but never quite goes on to deliver what it promised, at least in terms of how it looks and sounds. It is almost like the designers ran out of time or money after rendering the dragons and did not have enough resources left to finish off the game’s overall design.

Nevertheless, the game does have a certain appeal, especially if you’re someone who likes fantasy art. Gameplay is smooth and slick, and there are no pauses in play. This is a slot that also looks good on your mobile device.

The reels for the Dragon Kingdom slot machine are set in a golden frame, and look like more of a grid than traditional rolling reels. The background to the reels is a dramatic and windswept landscape of mountains and forests. The lower symbols on the reels are the usual collection of numbers and letters, and they look a little bit disappointing, if we are honest, on their plain green background.

The game’s wild is a dragon symbol, and this will substitute for all other symbols to form winning combinations for you. It is also quite valuable in its own right. It offers payouts of 10, 30, 100 or 400 coins if you land 2, 3, 4 or 5 on a payline.

The scatter symbol is the enchanted gateway, which glows with the promise of taking you to magical adventures. Whether it can actually do that is doubtful, but it is key to this slot’s bonus features, which we’ll take a closer look at in the next section of this Dragon Kingdom slot review.

If you land 3 or more of the enchanted gateway scatter symbol anywhere on the reels and you will trigger the game’s free spins bonus feature. Initially, you will be given 5 free spins. When the feature starts, you are given a choice as to which symbol you would like to appear stacked during the free spins. All the other symbols will appear singly and cannot be stacked during the bonus spins.

Each symbol you can choose as being stacked also has a multiplier attached to it during the bonus feature. You can see these below:

If 3 or more scatters appear during the bonus game, you will receive an additional 3 free spins. There is no limit to the amount of times this can happen. The game has a medium variance, and we found that we could trigger the free spins feature fairly regularly as we played.

The Dragon Kingdom slot bonus feature is solid enough in terms of entertainment, but, like other aspects of this game, we were left wanting a little bit more. It would be nice to have seen a little bit more action in the bonus features, perhaps like there is in another of Pragmatic Play’s fantasy themed slots like Fairytale Fortune.

The Verdict of this Dragon Kingdom Slot Review? Nice Graphics but Not Enough Features

Overall, we have to say that Dragon Kingdom is a little bit disappointing. The slot has some lovely graphics, especially when it comes to the dragons, but there is a lot that we feel could be improved. The other symbols apart from the dragons are not especially appealing, for example. The lack of any bonus features apart from free spins is certainly disappointing too.

But there are strong features to enjoy too. The dragons look superb, and the way that symbols can be stacked adds a nice twist to things, and the free spins feature can be lucrative when it comes to prizes. But, when it comes to the crunch, if you want a game that offers more than just pretty pictures of dragons, you may be better off trying another Pragmatic Play game, like Queen of Atlantis.

📱Can I play the Dragon Kingdom slot machine on my mobile phone?
Yes you can. The great thing about all of Pragmatic Play’s slots is that they are optimised for play on mobile devices. HTML5 technology means that the game looks great on iOS and Android mobile devices. When we tested the game on our phone, we saw that the game’s dragons looked just as sharp on a small screen as on a desktop computer.
🤔Is there another slot called Dragon Kingdom?
Yes, there are two versions of Dragon Kingdom. Pragmatic Play produced the slot that we have reviewed here. The other game was developed by Playtech, and was released back in 2012. Although the two games have the same name, the Pragmatic Play slot has more impressive graphics, and looks slicker and more contemporary, as you would expect from a game released in 2016 rather than 2012.
🎰Can I pick up a Dragon Kingdom slot bonus at an online casino?
Most online casinos will offer welcome bonuses to new players. Many of these will provide you with a matched amount of bonus credit that mirrors the amount of money you initially deposit in your account. If you check our list of casinos, you can find the ones that offer the best bonuses. You can then check if they offer Pragmatic Play slots. If they do, you can use your bonus to play Dragon Kingdom.