‘Step right up into Dr Fortuno’s carnival of curiosities’ is the tagline used by Yggdrasil for this slot. That promises a world of mystery and possibly a touch of the macabre for players of this game, which is set in the world of a travelling circus. If that sounds like something that might tickle your fancy, then you should read this Dr Fortuno slot review. It’ll tell you about the game’s movie quality graphics, as well as both of its bonus features. Read on to discover more about this intriguing Yggdrasil slot! 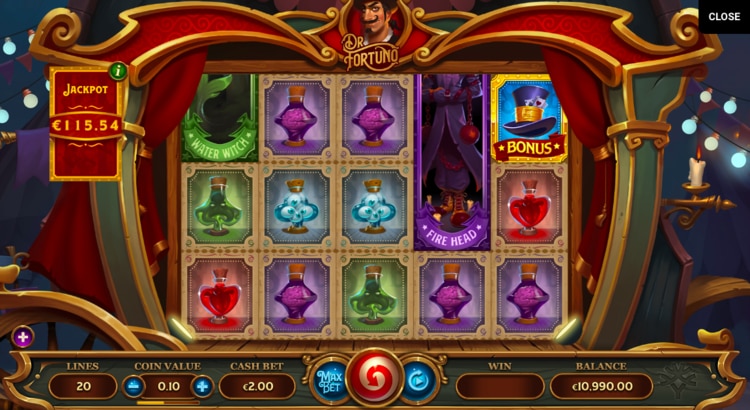 When it comes to the Dr Fortuno slot Yggdrasil have produced a game that is played on a grid of 5 reels and 3 rows. There are 20 paylines in operation, and the minimum bet that UK players can place is 10p. The maximum bet that can be placed is £100. The biggest win you can take away from this slot is 800x your stake.

Mobile gamers will be pleased to know that the game uses HTML5 technology, meaning that it can be played on your phone or tablet with no reduction in quality. The game is one of Yggdrasil’s more recent releases, having entered the market in April 2019. There is a progressive jackpot available in the game.

If you like to use the RTP of a game to guide your strategy then you will be interested to learn that the RTP of the Dr Fortuno slot is 96.20%. This is pretty typical for a slot of this type, and compares favourably with other Yggdrasil slots. Their Vikings Go Berzerk slot has an RTP of 96.10%, while Dwarf Mine works with an RTP of 96.80%.

The game has a medium variance. This means that your chances of large, infrequent wins and smaller, frequent wins should be roughly about the same. It also makes the game suitable for both seasoned slots veterans and relative newcomers to online gaming.

Immerse Yourself in the Cinematic World of the Dr Fortuno Slot

The Dr Fortuno slot is visually very impressive indeed. The graphics are cartoon-style but are of the kind of quality that you would see in a high-quality TV show or in a graphic novel, rather than something from the pages of The Beano, or from one of Nektan’s slots. The reels are set in the side of a gipsy caravan of the type that travelling circus performers might use. There is an ornate frame, atop of which sits an image of Dr Fortuno himself.

The detail in the graphics is excellent. This is a typical Yggdrasil slot, in that it looks lush, with deep colours and intelligent shading used to create a really immersive visual scene. The reels spin smoothly, and the symbols sometimes move within their spaces on the reels too. This slot looks much more impressive than other circus-themed games, such as Red Tiger’s Wild Circus, or Reel Play’s Buster Hammer.

There is a certainly a somewhat spooky atmosphere in this slot. The welcoming sequence is full of drama, as we move into Dr Fortun’s tent and meet the man himself. The music is a slightly eerie, jangly piano tune that can become a little repetitive but is actually very good. There are also some weirdly atmospheric riffs used in the music that sound like they were played on saws. It’s very high quality and matches the quality of the graphics.

The Night Twins and the Water Witch are 2 interesting symbols that you will see on the reels. They can expand to fill more than one space on the reels. Firehead the Clown is another symbol that can appear stacked in this way. These 3 symbols are the higher-value ones. The game’s lower value symbols are much more impressive than those that you will see in other slots. There are no mere numbers and letters used. Instead, these symbols are differently coloured pickle jars containing various body parts. Red, green, blue and purple are used as colours, contributing to the game’s macabre atmosphere.

Dr Fortuno himself is the game’s wild symbol, and very valuable he is too. Not only does he substitute for all other symbols to create winning combinations, but he also plays a part in triggering one of the game’s bonus features. He can expand to fill a whole reel too. The game’s other bonus is triggered by the top hat symbol. We’ll look at how both of these features work in the next section of this Dr Fortuno slot review.

As we mentioned above, there are two bonus features that you can enjoy in the Dr Fortuno slot. You can also pick up a progressive jackpot, if you’re lucky, the running tally of which is displayed alongside the reels during gameplay. We’ll look at all of these bonuses in detail here.

If you are lucky enough to spin in a win that includes at least one wild symbol then you will trigger the Wheel of Fortuno feature. Sometimes, the wild symbol will nudge into position to create a win of you too, if fortune is feeling generous. You receive one spin of the Wheel of Fortuno for each wild on the reels. Spinning the wheel gives you a chance of picking up one of the following four prizes:

You gain access to the free spins feature in this slot if at least 3 of the top hat symbols spin into view on the reels. You will also benefit from some bonus modifiers, depending on how many top hat symbols appear on the reels. If you get 3 symbols, then you’ll receive 1 modifier from the list. For 4 symbols, it’s 2 modifiers, and for 5 symbols it’s 3 modifiers. Initially, you will receive 10 free spins.

Here are the modifiers that you can pick up for the free spins:

Once your modifier or modifiers have been added the free spins start. As you can see, those modifiers give you a real boost, and can really improve your chances of taking home some lucrative prizes.

This Dr Fortuno slot review will end on a very positive note, with us stating that we absolutely loved this gem of a game. Yggdrasil slots are always visually impressive, but this one is especially so. There are so many little touches that add to its immersive atmosphere too, from the spooky music to the animated symbols. When you add in some potentially lucrative and very entertaining bonus feature, the game is even more impressive.

If you are keen on trying some macabre slots with a horror theme, then you might want to have a look at Halloween Jack from Net Entertainment, or possibly Day of the Dead from IGT.

🎰Is it easy to trigger the bonus feature in the Dr Fortuno slot?
This slot has a medium variance, so the bonus feature should be triggered reasonably often. When we played this slot, we found it quite hard to get into the bonus features, we have to say. Maybe we were just unlucky that day. As with all slots, the Random Number Generator is what governs your fortunes in the end. But with a medium variance slot you should be able to enjoy the free spins fairly often.
🎰Do many online casinos feature the Dr Fortuno slot?
Yes, there are plenty of online casinos that will offer you the chance to play the Dr Fortuno slot. The best way of finding them is to make use of this website. We have a list of great casinos that feature Yggdrasil games, and it is being updated all the time. Make sure you bookmark our site and return often – you don’t want to miss out on any new casinos.
🎰Do Yggdrasil produce any other Dr Fortuno games?
Yes, they have produced one other Dr Fortuno game. This is not a slot, though, but a version of blackjack. You can find out all about it at the Yggdrasil website. Dr Fortuno himself, called the ‘King in Yellow’ here, is the dealer, so you’re sure to be in for a spooky and eerie session at the card tables in his special tent!