Everybody loves donuts. The sticky, doughy, sweet treats are a staple of confectionary across the world. Now you have the chance to take your donut love to a new level with the Donuts online slot from Big Time Gaming. This slot has a retro feel to it, as well as

If you read this Donuts slot review you can discover whether this game gives you a real sugar rush, or its free spins feature just leaves you feeling flat. 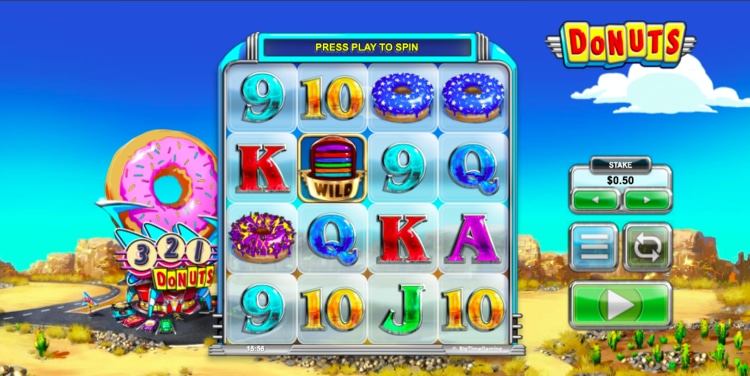 The Donuts slot game is played on a grid of 4 reels and 4 rows, with a potential 2401 ways to win. That number of paylines is due to the way that one of the game’s bonus features works, and we’ll have a closer look at that for you later on in this Donuts online slot review. For now, we’ll just tease you by saying it’s all about the donut boxes! You can use the autoplay feature if you prefer to watch the action unfold.

Depending on the casino you are playing at, the minimum bet for UK players is usually 20p and the maximum is £200. The biggest win that you can collect is 10,000x your stake or £250,000, whichever is reached first. The game uses HTML5 technology, so there is no reduction in quality when you play this game on your phone or your tablet. The game was released by Big Time Gaming in July 2018.

If you like to base your slots strategy around stats, then you will also be interested to learn that this is a high variance slot. This means that you should be looking out for the big wins that come from triggering features. Infrequent large wins are more probable than plenty of smaller size prizes on the Donuts video slot. When we played the game we found it hard to trigger the feature, but we did pick up quite a few large wins from symbols spinning in.

A Slick but Retro Feel

The reels are set in what looks like an old-fashioned gaming cabinet that floats in front of an American desert backdrop. You can see a road and donut shop with several parked cars in its lot. These cars look a little like 1950s convertibles.  The colours are fresh, with shades of light yellow and pink to the fore. This gives the game a cheerful and sunny atmosphere, and it brings to mind films and TV shows that are set in the USA in the 50s or 60s.

We’re pleased to report that there is no irritating music used in this slot. Instead, some bright and breezy sound effects play when you spin the reels. These effects sound very much like the noises that cabinet-based slots make. There are also some ambient sound effects, such as the hint of music being played in the donut shop behind the reels. These help to create an immersive atmosphere.

These Donuts are Iced with Strange Colours</H3>

The action on the reels is smooth and slick, and there is nothing at all clunky or clumsy about the way the action unfolds. The symbols on the reels are reasonably detailed and use vivid colours. Their overall design fits neatly into the theme of glossy 1950s American culture. The usual array of numbers and letters associated with playing card values are the lower value symbols used on the reels.

The higher value symbols are donuts. The colour of the icing used is pretty garish and doesn’t look especially appetising, though! But you don’t have to eat these purple, red, blue and green iced donuts. The wild symbol is a multicoloured slice of cake. This only appears on the second and fourth reels, and will substitute for all other symbols to create winning combinations, apart from the scatter symbol. The scatter symbol is a golden donut, and we’ll look at how it can help you in the next section of this review.

Look out for Boxes and Golden Donuts

In the BTG Donuts slot, the main feature is free spins. But you can also benefit from the donut box symbol appearing on the reels. The donut box opens up the possibility of more paylines.

We enjoyed playing the Big Time Gaming Donuts slot. It’s a game with a fresh and fun feel to it, and a nice line in retro graphics. So this Donuts slot review will end on a positive note with us urging you to give this game a go. While the game is not the most inventive or exciting we have played, it still has lots to offer, not least the fresh feel is given to its retro-style graphics. The donut box bonuses are a nice touch too.

If you like slots based on the theme of confectionary, then you might want to try Microgaming’s Candy Dreams, or perhaps you’d enjoy a spin on Sunset Delight from Thunderkick.

🎰How many free spins in total are available in the Donuts online slot?
The number of free spins that you can gain during this game’s bonus feature is unlimited, at least potentially. You can trigger fresh spins throughout the game’s free spins feature, with no upper ceiling set on how many times this can happen. This makes the potential for a Donuts slot big win very much greater. You should remember that the game has high volatility, though. You may not trigger the feature often, but when you do the wins can soon stack up.
🎰What is the most valuable standard symbol on the reels?
You can access the game’s paytable by clicking the tab on the right of the reels. There, you can see the values of all of the symbols used in the game. The most valuable standard symbol in the Donut slot is the donut with the garish purple icing. This symbol will bring you a prize of 15x you bet if 4 of it lands on a payline. The red donut is the second most valuable, but this will bring a prize of just twice your bet.
🎰How many symbols do you need for a win in the Donuts slot machine?
The 4x4 grid layout in this slot is unusual. The way that the paylines operate is also slightly different. The lower value symbols will only pay out when there are 4 of them along a payline. For the higher value symbols, it is different. These will payout for 3 or 4 symbols on a payline.