Into the Deep with the Dolphin Gold Slot

It’s fair to say that the concept of dolphins as a theme for a slot is not one that immediately leaps to our minds. Nevertheless, there are plenty of other animal-themed slots out there, so why not use these super-clever sea mammals? Lightning Box Games have gone deep sea with this slot and it’s certainly helped make this game distinctive.

So did LBG succeed in making this an ocean classic? Or did it sink without trace? You’ll need to read this Dolphin Gold slot review to find out! 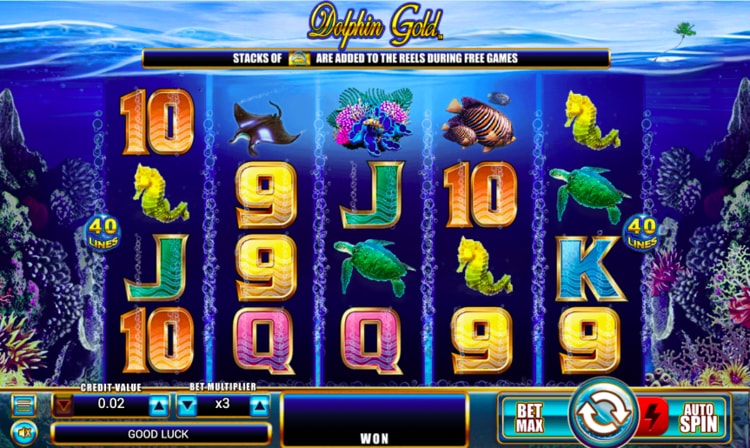 The Dolphin Gold online slot is played on a grid of 5 reels and 4 rows. There are 40 paylines of action for you to enjoy. The usual minimum bet for UK players is 1p and the maximum is £80. There is a potential jackpot prize of 500X your stake. The game can be played on mobile devices with no compromise in quality thanks to its use of HTML5 technology. Lightning Box released the game in December 2015, so it has been on the market for just over 4 years at the time of writing.

There is an autoplay button that you can use if you like to watch the action unfold rather than repeatedly clicking the spin button. There is also a turbo play button if you want to speed things up. This is the red lightning bolt symbol in the bottom right of the screen. As you would expect, you can also mute the game’s sound, and a full paytable can be found by clicking on the information tab.

What is the Dolphin Gold Slot’s RTP?

The Dolphin Gold game has an RTP of 95.303%, which is quite low for a slot of this type. Lightning Box slots often hover between the 95% and 96% range when it comes to RTP, however. Lightning Horseman, for example, has an RTP of 95.52% while Silver Lioness has an RTP of 95.27%. Games with an RTP of over 96% from LBG are relatively rare, but if you want to try one of their slots with this type of RTP then Frogs n Flies stands at 97% and is a good game to choose.

If you’re looking to shape a winning slots strategy for this game then it is also worth knowing that the game has a medium to high variance. This means that you’re going to need a little bit of patience as you wait for the big wins to spin in, rather than relying on frequent small wins to top up your bank balance.

The Dolphin Gold slot machine looks pretty impressive. The reels are suspended in front of an ocean backdrop that is a soothing shade of dark blue. The blue shades become lighter nearer the top of the screen, where we see the surface of the sea, complete with a floating sea plant. Down near the sea bed, where the blues shades are much darker, we have a detailed coral reef. All of this helps to create a really immersive atmosphere and we certainly felt that we were being drawn into the underwater world of the game.

It’s rare that we would say about an online slot, but we really loved the sound effects in this game. Music was kept to a minimum. The sounds of the sea dominate, with waves sighing and accompanying the noise of bubbles popping to the surface. Listening to the sound effects is actually pretty relaxing, as they sound very soothing.

This puts this game a world away from many other slots, where the sound effects are often brash, intrusive and irritating. There is music that plays in flourishes when events in the game occur, such as win, but it’s tastefully done and works really well.

Watch out for Leaping Dolphins

The lower value symbols on the reels are the usual range of letters and numbers. You’ll see 9, 10, J, Q, K and A. The higher value symbols are all sea creatures. Manta rays, turtles, seahorses and tropical fish are all swimming in this slot’s sea. One symbol functions as both the game’s scatter and wild symbol. This is the leaping dolphin and it only appears on reels 2, 3 and 4.

The gold dolphin is the wild symbol and the blue version is the scatter symbol that triggers the bonus. We’ll look at the role it plays in the game’s bonus features in the next section of this review.

The reels spin pretty smoothly and the action unfolds in a satisfying way in this slot. While not maybe of absolute premium quality, the visuals and audio in this game work really well together and give this game a sheen of real quality.

A Slot that’s all about Free Spins

The dolphin gold slot machine has just 1 bonus feature, but this is improved by extra symbols which can give your chances of taking home a big prize a bit of a boost. Let’s take a closer examination of the bonus feature now. The feature takes place on a slightly different set of reels.

You can retrigger the free spins feature at any time if 6 or more blue dolphins appear on the reels during your free spins. This can lead to you picking up a huge collection of spins, and this is when it’s worth noting that this game has high variance. When the wins come in via the feature, they do tend to stack up pretty quickly. You may need to use a little patience as you await the feature, though.

We enjoyed playing this slot. It certainly impressed us with its visual design and sound effects. The graphics are effective without being overly detailed, and the sound really brings the game’s undersea world to life. There is also a pretty impressive bonus feature that can generate really large wins for you if you enjoy a bit of good luck along the way. This is an enjoyable game, and we recommend that you give it a try. It is certainly one of the more entertaining deep sea slots that we have seen.

If you enjoy underwater-themed slots then you might also want to give Ariana from Microgaming a spin, or perhaps Under the Sea from Betsoft.

💎What is the most valuable symbol in the Dolphin Gold online slot?
If you consult the game’s paytable while you play, you can see what each symbol is worth in prize money, and how many symbols you need on a payline to claim the prize. The most valuable symbol in this game is the manta ray. If 5 rays spin in on a payline you’re receive a prize worth 1500 coins. If 4 appear on a line, then the prize is 375 coins. Watch out for those rays!
⏩Can I set the autoplay feature to a certain number of spins in the Dolphin Gold slot?
Yes, you can adjust the autoplay button to suit your preferences during the game. You can set it to function for 10, 25, 50 or 100 spins. This makes it easier to keep track of the progress that you are making. It also means that you can manage your bankroll more effectively during the auto spins. Always remember that if time is limited you can use turbo play in this game too rather than relying on the autoplay feature.
🐬Is there another version of the Dolphin Gold slot available?
There is another Lightning Box slot that bears the game of Dolphin Gold. It is called Dolphin Gold – Stellar Jackpots. It includes a progressive jackpot bonus. The triggering of the progressive jackpot feature in this game is random. It also adds another twist to the original game in that it includes an element of space travel in the original underwater setting. If you’re looking for a casino where you can play it, check out our list of Lightning Box casinos at this website.