Da Vinci Diamonds slot is based on the life of Leonardo Da Vinci, a Renaissance genius. A man of science as well as the artist who painted the Mona Lisa, the Tuscan had incredible foresight and genius. Even he could never have predicted that one day his great artworks would be used as the theme for a slot from IGT.

In this Da Vinci Diamonds slot review we’ll give you the lowdown on this game. You can find out whether it stays true to the legacy of the Renaissance polymath, or is merely a poor copy of a masterpiece. 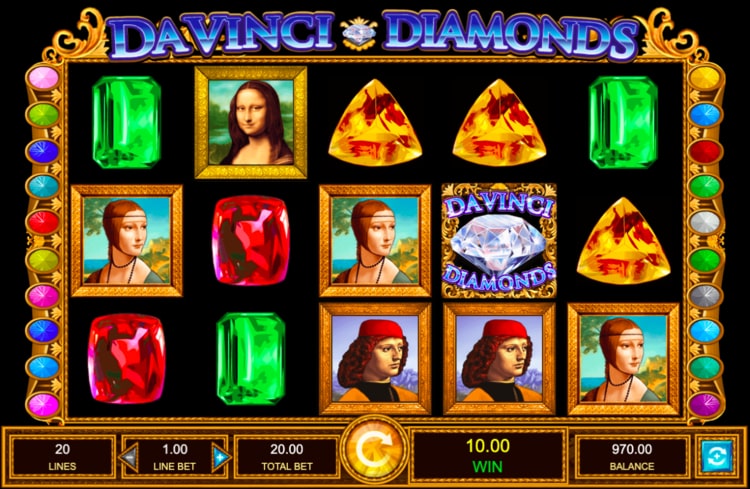 The Da Vinci Diamonds slot machine is played on a grid with 5 reels and 3 rows. There are 20 paylines. If you’re playing this slot in the UK, your minimum bet is 20p and your maximum is £400. The game uses HTML5 technology, so fans of mobile gaming can rest assured that there is no compromise on quality when you play this slot on your phone or tablet.  There is an autoplay button that allows you to take a rest from spinning the reels yourself.

IGT released this game in February 2012, meaning that it has been around for almost a decade now. This has given it the chance to establish itself as a perennial favourite at many online casinos. It does, though, also mean that the graphics look a little dated – something we’ll go into more detail about later on in this Da Vinci Diamonds slot review.

The RTP of this slot is 94.94%, a figure which is pretty typical for a slot from IGT. The RTP figures for their slots tend to hover between 94.5% and 96%. Their popular Cleopatra slot, for example, has an RTP of 95.02%, while their Ghostbusters branded slot has an RTP of 94.50%. In addition to the RTP, you will need to know that this is a low to medium variance slot. This makes it more likely that infrequent large wins will be more likely than plentiful small wins. You should adjust your strategy accordingly.

The Da Vinci Diamonds slot game looks a little dated now, which is not too surprising for a game that was first released in 2012. The reels are framed like one of Da Vinci’s great paintings. Underneath the reels, you can find all the buttons you need to change your bet limits. If you click on tabs at the above the reels you can access the game’s paytable and rules.

The music that accompanies the slot’s opening sequence is impressive at first, though it can become a little repetitive. It is much better than the music for most slots, though. It is a rich, classical tune, full of flourishes and exuberance, and you can certainly imagine Renaissance courtiers dancing to it in mannered and sophisticated ways. It is certainly more sophisticated than the game’s graphics. The sound effects during the game twinkle and chink like the sounds of gems being placed in bags. They add atmosphere without being outstandingly immersive.

Check out the Portraits in the Da Vinci Diamonds Slot

The symbols on the reels float on a black background and slide rather than spin into place. The lower value symbols are gemstones, and you’ll green, orange and red stones. The higher value symbols are depictions of Da Vinci’s artworks. The Mona Lisa, Cecilia Gallerani and ‘Portrait of a Young Man’ all appear. The Da Vinci Diamonds logo is the most valuable symbol of all, though. If you fill the reels with this symbol you’ll win 5000 times your stake. Depending on your bet levels, that could see you collect a prize of £500,000 on a single spin.

The wild symbol is a purple gemstone set in a gold frame with the word ‘wild’ emblazoned across it. The bonus symbol is very ornate and easy to spot. This symbol acts as the game’s scatter symbol and triggers the free spins feature. We’ll take a closer look at that in the section below.

Overall, when it comes to its appearance and sound effects, this is a solid rather than a spectacular game. Given its age, however, that should not be too unexpected. As digital technology marches forward the graphics on offer in slots continue to improve at a vast rate of knots. If you’re keen on trying some newer games based on great cultural works, try Romeo and Juliet Sealed with a Kiss from Greentube, or Van Gogh from Sthlm Gaming. Both have appealing graphics that have differing, but impressive, styles.

If you’re playing the Da Vinci Diamonds slot online then you’ll notice that the game has 2 features. One of these is the free spins feature. This slot, though, also uses the Tumbling Reels concept, which can generate some extra excitement. We’ll explain how both these features work here.

This Da Vinci Diamonds slot review ends on a positive note overall, with us recommending that you give this game a spin. Although it has been on the market for 8 years now, and some of the graphics do seem a little geriatric and creaky, it still offers plenty of great entertainment. The Tumbling Reels feature remains a classic and gives your chances of big prizes a real boost.

We suspect that Leonardo himself may well have enjoyed a spin or two on this classic slot, so give it a try!