The connections between Ancient Egypt and outer space have been the subject of dozens of TV shows and books of questionable historical accuracy over the years. They have also been a fertile source of inspiration for slots developers, and ELK Studios have made their contribution with the game Cygnus, that takes its name from the constellation with which the Great Pyramid at Giza exactly aligns.

We’ll tell you all about this game in this Cygnus slot review. You can see whether this game can take you back in time and beyond the stars, or will just leave you baffled and bamboozled. 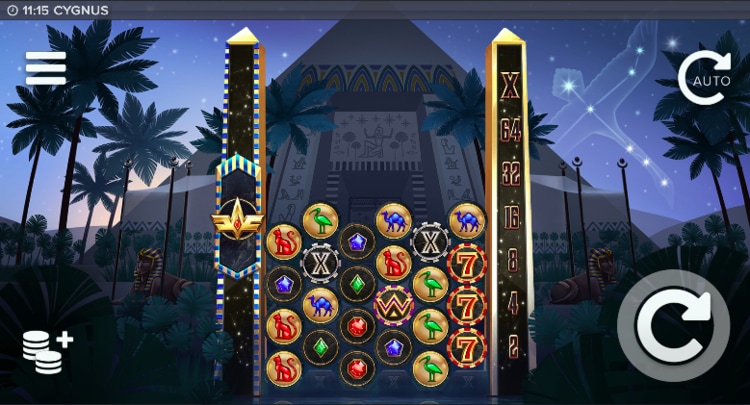 Key Facts about the Slot Machine

The Cygnus slot is played on grid of 6 reels and 4 rows, though this number can change thanks to the game deploying the Avalanche concept. This is where the symbols forming winning combinations disappear to be replaced by new symbols, which in turn create new wins for you. The number of rows can increase to 8, and the number of paylines can rise from the standard 4096 right up to a huge 262,144. We’ll talk about the way the Avalanche concept is used later on in this review.

There are 12 bet levels available in the game. For UK players, the minimum bet amount is usually 20p and the maximum is usually £100. The maximum win available for UK players is usually £250,000, though this, as with the bet levels, might change depending upon which operator you are using, so always check. The game can be played on mobile devices of all types, as it uses HTML5 technology. There is an autoplay option available and a paytable. The game was released in December 2019, so it is a very recent addition to the ELK catalogue.

The Cygnus slot has an RTP of 96.10%, which makes it pretty typical for a slot of this type. It also fits into the typical range for ELK slots. Other slots from ELK with the same RTP include The Wiz, Voodoo Gold and Win Win. Most slots from ELK fall into a range between 96.10% and 96.40%, so this game is perhaps a little on the low side for one from their range.

Seasoned slots gamers will also want to know that the game has high volatility, with ELK awarding it a rating of 8 out of 10 in this regard. That means you will need to have a little bit of patience as you wait for the big wins to drop in. When the feature does kick in, though, you can expect some lucrative wins to come your way.

This game is much more visually interesting than many slots we have seen. The reels are set between two monoliths, and he backdrop is an Egyptian pyramid at night. Palm trees and a couple of sphinxes help to set this nocturnal desert scene. The colours are crepuscular greys and greens, and Cygnus is in the night sky to help provide some extra detail for you. On the monolith on the left side of the reels is a Cygnus symbol, while on the right hand one is a multiplier meter. We will explain how the latter works later on in this Cygnus slot review.

The reels do not ‘spin’ in this game. Instead, the symbols, which are set in round, coin-like shapes, drop into the space between the reels and pile on each other.

As for the sounds you’ll hear, the music is suitably dramatic with some Egyptian type flourishes in it. In truth, though it’s nothing special and is a bit disappointing for ELK, who often produce some really impressive musical soundtracks in their games. Additional sound effects play when you spin the reels and the symbols drop, and there are some extra flourishes of sound and music when you win. They’re not especially impressive, however, and certainly don’t match the quality of the symbol design and animation on the reels.

Watch for the Red 7 Among the Symbols

All of the symbols in this slot are circular. The lower value symbols are red, blue and green gemstones. Most of the higher value symbols are linked to Egyptian mythology in some way, so you’ll see a green pelican, a red camel and a blue cat. It is therefore somewhat unusual and a little bit jarring to see a red, casino chip-style number 7 as the game’s most valuable symbol. We sense that the designers might have run out of ideas when it came to this one.

There are 3 special symbols to watch out for. These are the multiplier scatter, which is a big X symbol; the wild, which is a W; and the bonus scatter that triggers the free spins feature. This latter symbol is the game’s logo, and you can see it displayed clearly on the monolith to the left of the reels.  The wild will substitute of all other symbols apart from the scatters. We’ll look at how these symbols can help you in the next section of the review.

An Avalanche of Wins with Free Drop Extras on Offer

The Cygnus slot game has got two features that can generate some big wins for you. As well as its own version of the free spins feature that comes as standard in many online slots, there is also the Avalanche concept to watch out for. Read all about both here!

The Avalanche concept means that every win you spin in can set you off on a streak. When this happens, you’ll see the symbols that formed the winning combination disappear. The gravity mechanics will then kick in, with symbols at the top of the reels falling into vacant spaces. New winning combinations can then be formed, which can set off a new ‘avalanche’ of symbols and more wins.

Every consecutive avalanche win will increase the number of available paylines. You can see how this develops below:

Additionally, there is also a multiplier meter located on the monolith on the right hand side of the reels. If multiplier scatter symbols appear and drop down to the very bottom of the grid then you will ‘climb’ the multiplier meter. For each step on the meter, the value of the multiplier will double, rising from x2 all the way up to x64, if you’re very lucky.

Only the Avalanche concept can help you trigger the free spins bonus feature in the Cygnus slot. Called ‘free drops’ in this game due to the way the reels move, the feature is triggered when at least one of the free spins bonus symbols appears on the reels and touches the monolith on the left side of the screen. The symbol you need to watch for is displayed on this monolith so it is easy to spot among the other symbols.

This gives you 7 free drops, and the reel set will immediately expand to 8 reels and 262,144 paylines. The multiplier scatter symbol also remains sticky during the free drops, something that makes it easier for you to climb the multiplier meter. The free drops feature can be retriggered once, so you can end up enjoying 14 free spins in total.

We were really impressed with some of the aspects of this game, so this Cygnus slot review will end on a largely positive note. While some of the symbols could have been more original in their design, and the music was not great, this game does look generally very impressive. The way the symbols move on the reels is very appealing indeed. The features, when the Avalanche concept really kicks in properly, can also be very impressive. We liked this game and recommend you try it out for yourself.

If you enjoy Egyptian-themed slots, have a look at Cleopatra from IGT, Eye of Horus from Blueprint Gaming, or Coins of Egypt from Net Entertainment.

📈What is the Cygnus slot RTP?
Cygnus slot RTP is slightly over the industry average, with 96.1%. This is pretty high, so most of the casual players should be satisfied. But in case you want to dedicate yourself to a single slot, we recommend you to search for a more favourable game, such as NetEnt’s Bloodsuckers which comes with RTP rate of 98%.
🤔Where can I play the Cygnus slot game?
If you want to try your hand at Cygnus then you need to find our list of online casinos that offer ELK slots. You can find our list here at this website, and it is being constantly updated to reflect just how often new casinos are opening. You can also find out where the most tempting welcome bonuses are on offer, so make sure you check back here soon!
📱Does playing on my mobile device affect the quality of the Cygnus slot?
No, you can play this game on your mobile device. ELK make mobile compatibility a central plank of the design of all of their games. This game uses state of the art web technologies including support for canvas and WebGL. If you want to optimise its appearance, open the game in 1600 x 900 resolution, if possible. When we tried the game on our phone, the animation of the symbols looked as impressive as it did on our laptop.