Police officers chasing criminals is an old, old story, and it forms the basis for thousands of novels, movies and games. Some of those games are slots, of course, and Greentube’s contribution to the genre is Cops n Robbers Vegas Vacation, a game that promises much thanks to the sheer quantity of bonus features it contains.

This Cops n Robbers Vegas Vacation slot review will take a closer look at this crime caper from Greentube. Is it the heist of the century or just another failed crime caper? Read on to find out! 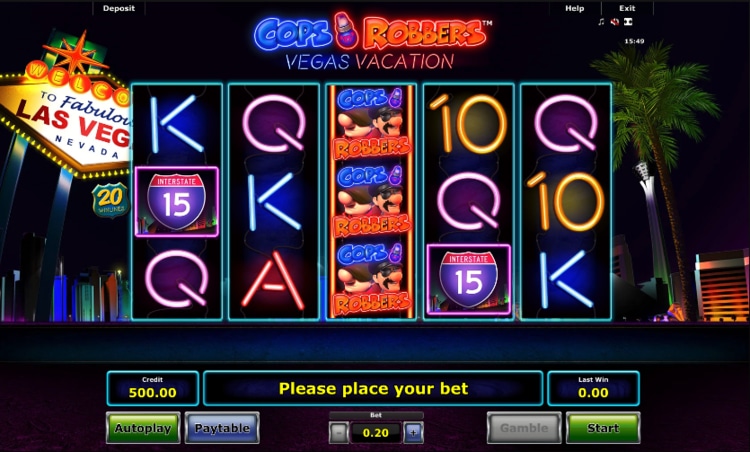 The Cops n Robbers Vegas Vacation slot is played on a grid of 5 reels and 3 rows with 20 paylines. The number of paylines does double during one of the bonus features, though, something that we will deal with later on in this review.

The minimum bet that you can place is 0.005 coins and the maximum is 40 coins. The game works well on mobile devices, thanks to its use of HTML5 technology. It was released in September 2017, and there is an autoplay feature available if you like to take a more passive approach to your slots gaming.

What is the Cops n Robbes Vegas Vacation Slot RTP?

The RTP of the game is 95.07%, which is on the low side for this game. Greentube slots have varying RTP rates, though, so it is impossible to generalise about them when it comes to RTP. Many of their slots, such as Rainbow King or Rumpel Wild Spins have RTPs of exactly 95%. Mah jong King, in contrast, has an RTP of 97.20%.

Of course, if you are an experienced slots gamer you will know that RTP can only ever be a very tentative guide as to how a game will perform. What might be of more use to you is the fact that the game is of medium volatility. This means that your chances of picking up frequent small wins should be roughly the same as the opportunity to collect larger wins less often. Our experiences of playing the game bore this out.

The reels in this slot are set in front of basic view of a night time Las Vegas. Neon lights illuminate the darkness. There is not that much detail in the graphics, but they set the scene adequately. The characters of the game - Bert the robber, Bozo the dog and Sergeant Bell the police officer – are rendered as cartoon characters. They actually look a bit dated too, like basic graphics from a 90s TV show that used computer animation. We were not that impressed with them, to be honest.

The symbols on the reels are pretty basic too. The lower value symbols are the typical range of letters, this time rendered as neon strip lights in various garish colours. They certainly fit with the theme of Vegas sleaze, but they don’t look very impressive at all. The special symbols are also a bit basic in design. The higher value symbols are all objects associated with Las Vegas, like dice, Interstate road signs and a police badge.

When it comes to sound, a theme tune plays that is reminiscent of 1980s TV shows like ‘Minder’. The characters also talk with somewhat dodgy accents.  There are also some cartoon sound effects that play when events occur in the game. They add atmosphere without ever feeling truly immersive.

As with other Greentube slots, such as Romeo and Juliet: Sealed with a Kiss, the Cops and Robbers Vegas Vacation slot is packed with entertaining bonus features. During the base game, you can trigger 4 separate features. There are also 4 more features that are triggered by the special bonus scatter symbol that can only appear on reel 5. We’ll take a closer look at all of these features here.

There are 4 features that can occur while you are in the base game in this slot. They happen at random and you have no control at all over when they occur, so you need to keep a sharp eye on the reels.

For the main bonus features, you need to watch out for the bonus scatter symbol. This is easy to spot as it has a question mark on it. These symbols can only appear on reels 1, 3 or 5. On the fifth reel, though, different versions of the symbol can appear. These correspond to each of the various bonus features here:

Daylight Robberies
For this feature, the Daylight Robberies bonus symbol needs to appear on reel 5 at the same time as conventional bonus symbols spin in on reels 1 and 3. You are awarded unlimited free spins on a new set of reels that features 40 paylines. Bonzo also appears as an extra wild symbol that bounces from reel to reel on each spin. Up to 4 bouncing wilds will appear, and a x2 multiplier is applied when they form part of a win. You need to rob the casino. After each successful robbery, more wilds are added. If you rob the casino, you get a prize worth 1000x your stake.

If Bert and Bonzo are caught, then they go into another ID parade. This one has an additional variation, in that if other criminals are picked out then you can receive paid compensation.

This Slot is a Mixed Bag of Swag

This Cops n Robbers Vegas Vacation slot review has to conclude on a bit of a mixed note. While we thoroughly enjoyed the quality and variety of the bonus features, we were left a bit disappointed overall. This is due to the poor quality of the graphics and sound effects, which look and sound a little shoddy and rushed. But the game is still a lot of fun to play.

If you enjoy slots that are set in Las Vegas, you might want to try Weekend in Vegas from BetSoft Gaming. There is also Vegas Dreams from Microgaming that is well worth a look. For a cops and robbers game, try Microgaming’s Mugshot Madness.

🎰In which online casinos can I play Cops n Robbers Vegas Vacation?
If you are looking for a good online casino where you can play this game and other Greentube slots then you should make use of our website. We feature an up-to-date list of casinos that offer Grentube slots. New casinos spring up all the time, so make sure you check back here as often as possible. As well as finding places to find your favourite slots, you can also discover where the most lucrative bonuses are being offered.
🤑What is the most valuable symbol on the reels in the Cops and Robbers Vegas Vacation slot?
The best paying symbol in this slot is Bert’s Wild. If 5 of these line up on a payline then you will collect a cool 25 times your stake. You can find the value of all the symbols in the game’s pay table, which you can access via clicking the game’s information tab. There, you will see all the values for each symbol used in the game, as well as more information about the slot’s bonus features.
👮Are there any other Cops n Robbers slots from Greentube?
Yes, this game is part of a series of 3 slots that are based on very similar themes and characters. The other 2 titles are Cops n Robbers Millionaire’s Row and Cops n Robbers. You can find out where to try them by checking our list of Greentube casinos here at this website. New casinos are cropping up all the time, so make sure you check back here regularly.