Ancient Egypt has proved to be a fertile source of inspiration for slots developers over the years. IGT’s contribution to the genre of Egyptian-themed slots is Cleopatra, a game that has been around for the best part of a decade now. You can find plenty of free spins on offer, and possibly a progressive jackpot too.

In this Cleopatra slot review, we’ll take a closer look at this game for you. Read on to discover whether this game is worthy of carrying the name of the great queen or not. 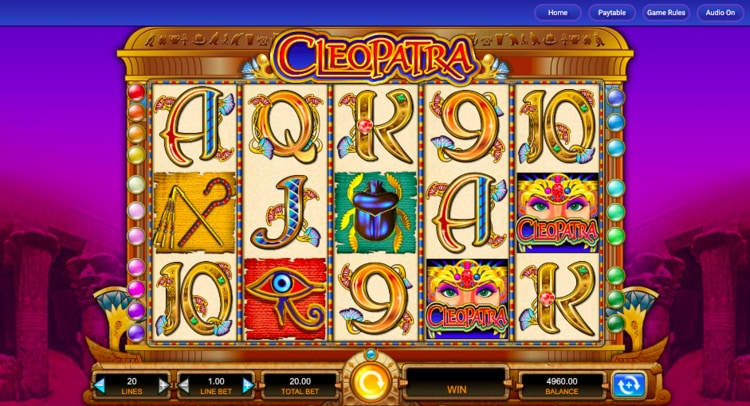 The Cleopatra video slot is played on a grid with 5 reels and 3 rows. There are 20 paylines. For UK players, bet limits range from a 20p minimum to a £600 maximum. The game can be played on mobile devices without there being any compromise in quality, thanks to IGT’s use of HTML technology, which optimises games for a wide variety of devices. The game was released in January 2012 and has established itself as a firm favourite of online casino gamers over the last 8 years or so. The game is also played in real life casinos as a cabinet game, especially in the United States.

The RTP of the Cleopatra slot game varies between 95.02% and 95.70%, depending upon which casino you are playing it at. This is quite low for a video slot of this type but falls into a pretty typical range for an IGT slot. Their Cluedo Classic slot, for example, comes with an RTP of 95.03%, while Mistress of Egypt has an RTP that varies between 95.60% 96.20%.

If you prefer to base your slots strategy around a game’s variance rather than its RTP, though, you will be interested to learn that the Cleopatra online slot has a medium variance. This means that your chances of infrequent big wins should be roughly the same as your opportunities to take home smaller, frequent wins. When we tried the game, this seemed to tally with our experiences.

The slot has a brassy, almost brash look to it at times, evoking a feeling of Las Vegas and the candy-coloured glow of casino lights. It was no surprise to learn, seeing this, that the game is also very popular as a cabinet game in bricks and mortar casinos. The dominant colour is a pale, desert shade of yellow, which is appropriate given the game’s theme.

The reels are set on a golden frame, which we have to say looks much more like something that you would see in Las Vegas rather than Egypt itself. The action is smooth and the gameplay certainly feels very slick. There is nothing clumsy about the animation. There is certainly a slightly different feel to this game than there is to other Egyptian themed slots, such as Book of Ra from Novomatic, or

Dance in the Sand with this Slot’s Soundtrack

As far as how the game sounds, we have to say we were pretty impressed. A funky little tune plays as the reels spin, which contains a few nods to the sand dancing type of music that many people associate with Ancient Egypt. It’s certainly more pleasant than much of the music that graces slots. There are some interesting sound effects too that accompany incidents in the game. These certainly help to create a bouncy, fun atmosphere. We hear a female voice saying things like ‘magnificent’ in a breathy, sexy way too. We assume that this is how the game’s developers imagine Cleopatra sounded if she’d been American, anyway.

The lower value symbols on the reels are the usual range of numbers and letters associated with playing card values. So you’ll see 9, 10, J, Q, K and A spinning around as you play. All of the higher value symbols are associated with Ancient Egypt in some way. There is a scarab beetle, an Eye of Horus, some hieroglyphic cartouches and a lotus flower.

Cleopatra herself is the game’s wild symbol. As well as substituting for other symbols to create winning combinations for you, the Queen will also award you stake multipliers. These increase with the number of wilds in a win. One wild plus two other symbols, for example, will award a multiplier of x2.

The game’s scatter symbol is the Sphinx. If 3 or more of this symbol appears anywhere on the reels, the bonus feature is triggered. We’ll take a closer look at the next section of this Cleopatra slot review.

Focus on the Free Spins

There is one bonus feature in the Cleopatra slot, though you do have the option of going for a progressive jackpot too at some casinos. We’ll take a closer look at both of these aspects of the game here.

If 3 or more the Sphinx scatter symbols appear anywhere in view on the reels then the free spins feature is triggered. Whether you spin in 3, 4 or 5 scatters you will receive 15 free spins. All winnings during the feature are subject to an x3 multiplier, which makes this feature potentially very lucrative indeed.

You can also gain more free spins if more scatters spin in on the reels during the bonus feature. If another 3 or more scatters appear then you can gain another 15 free spins. The maximum number of spins that you can receive during the feature is 180, which gives you plenty of opportunities to take home some massive wins.

You can also find a version of this game with a progressive jackpot at some online casinos. If you are playing this version then you need to keep an eye out for the Mega Jackpots symbol. If 5 of these land on the centre payline during the base game or the bonus feature then you will win the progressive jackpot. Non-winning spins can also trigger the Second Chance feature. This gives you a random chance to win a prize.

This Cleopatra slot review will conclude on a positive note. We enjoyed this game, even though the bonus feature could have offered a little more depth. You can benefit from a massive amount of free spins, though, if you enjoy a bit of good fortune. The game also looks and sounds pretty impressive.

If you like playing slots based on the life of the last Egyptian Pharaoh, there is a large selection of Cleopatra slot games available. IGT produced a Cleopatra Gold game, while Rabcat developed a game called Cleopatra’s Gold. There is even an 18+ ‘adult’ game that uses the theme, called ‘Cleopatra 18+’, developed by Mr Slotty if you find such an idea tempting.

🎰What is Cleopatra slot RTP?
Cleopatra slot RTP is between 95.02% and 95.70%. These are all pretty low numbers, meaning that this game will give you less money over large number of spins. But if you are just a casual player, don’t worry too much about this, since RTP isn’t that important in the short term. However, in case you plan to play for an extensive period of time, our advice is to move away from Cleopatra and try some other slot with higher RTP.
🎰How to win on Cleopatra slot?
There is no guaranteed way to win on the Cleopatra slot, due to the outcomes being controlled by a Random Number Generator. This means that there is no foolproof strategy that can be developed to guarantee a win on this game. What you can do is look at the game’s RTP and variance, and set your bet limits at appropriate levels. If you’re playing the progressive jackpot version of the game, higher bets give you an improved chance of the jackpot.
🎰Where can I learn how to play Cleopatra slot?
Picking up the details on how to play the Cleopatra slot is not hard. As well as reading our review here, you can also click on the game’s I tab. This shows you the values of each symbol on the reels, as well as how each payline is structured. You can also find out more about how the wild and scatter symbols work, and what the bonus feature does.