It’s Dog versus Cat with Claws Vs Paws

The battle between dogs and cats is a subject that features in a host of movies, TV shows, books and games. Playson’s contribution to the genre is Claws vs Paws. This slot comes complete with a dogged (see what we did there?) police pooch chasing after a crafty criminal cat. There is plenty of cartoon fun on offer for everyone.

In this Claws vs Paws slot review, we’ll give you the full rundown on this game. You can find out all about the bonus features, and also about the intriguingly good musical soundtrack. Read on to find out more! 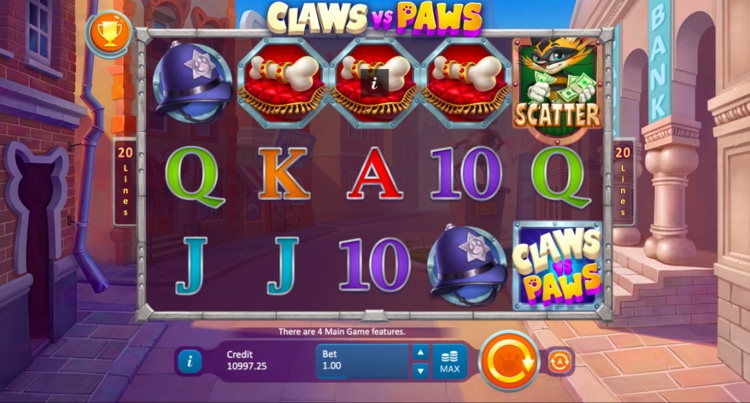 Claws vs Paws: The Details

This Playson slot was released in March 2018, making it a relatively recent addition to the company’s catalogue of games. The game has 5 reels and 3 rows, and there are 20 paylines. The minimum bet is 0.2 currency units, and the maximum is 140. Thanks to Playson’s use of HTML5 technology, the game can be played on mobile devices. There is an autoplay option too.

The Claws vs Paws RTP is 96.85%, which puts in the higher reaches when it comes to this stat. Playson games tend to vary from title to title when it comes to RTP, but this is a pretty typical figure for them. It is a medium variance slot, meaning that your chances of picking up bigger or smaller wins are pretty much the same. The game will appeal to both experienced slots gamers looking for big wins, and relative novices who like to pick up smaller wins on a regular basis.

Enjoy the Cartoon Sights & Sounds of the Claws vs Paws Slot

This game is a treat for fans of cartoons. Anyone who grew up in the 1970s and 80s will recognise the style of imagery from all of their favourite cartoon shows of the era. The reels are set in front of a street on which we can see a cat-shaped doorway and a bank vault. The cat and dog that are the main characters appear on the left and right side of the reels respectively. They both play a role in the game’s bonus features, and you can find out what that role is later on in this review.

It is also worth noting that the music in the game is really good. Playson seems to have a knack for producing games that feature engaging, high-quality music. The jazz sounds on offer here are certainly much better than the music that you find in most slots. With this game, you can hit the autoplay button and simply sit back and enjoy how the game sounds.

There are also some satisfying clicks and rattles that you hear as the reels spin. The gameplay is smooth and slick, and there is nothing clunky about the animation on the screen. The cat and the dog that appear at the side of the reels are both detailed and appealing in appearance.

The lower value symbols on the reels are the usual array of numbers and letters. The higher value symbols are items associated with the criminal and police officer main characters. You’ll see a bunch of keys, a British bobbie’s police helmet and a jewelled bone, as well as the various wild and scatter symbols. We’ll take a closer look at the game’s wild and scatter symbols in the next section of this Claws vs Paws slot review.

The Claws vs Paws Bonus Features are Bountiful and Beautiful

So this game looks and sounds good, but what about its bonus features? The good news is that this slot has plenty of entertainment to offer to slots fans who like extra features. There is a useful little feature in the base game, for example. The cat and the dog who is trying to arrest him will occasionally, at random, appear alongside the reels.

The cat will appear with a tablet, and he will use this to ‘hack’ the reels so that more wild diamond symbols are added to them. This guarantees you winning spins. He will also occasionally nudge scatter symbols into place to trigger the main bonus feature for you. He will even sometimes give you between 2 and 4 re-spins, each of which will provide a guaranteed win.

But the cat is not the only helpful character that appears. As we have already stated, the dog can also pop up and help you. This canine copper will shine his red torch onto the reels at random. This causes the lower-paying card symbols to disappear from the reels. The reels then re-spin with higher value symbols being used, boosting your chances of a big win.

Look Out for the Scatter Symbols in Claws vs Paws

Build up Your Achievements in the Claws vs Paws Fruit Machine

In addition to the free spins bonuses, there is also an achievements feature in this game. You trigger this feature by collecting the tokens that spin in randomly during the base game. Every time one appears on the reels it is added to your meter at the top left of the reels. When you have collected a certain number of tokens, you will receive a spin on a prize wheel. There are 5 wheels in total, depending on the number of tokens that you have collected. Prizes include multipliers as well as access to the slot’s bonus features.

Find Crime Capers and a Feature Frenzy in Claws vs Paws

We have to say that we enjoyed reviewing this game from Playson. The cartoon graphics are a lot of fun, and the two main characters are very charismatic, and can also boost your prize fund with some random bonuses. Like another Playson title, Chicago Gangsters, there is also an excellent jazz soundtrack for you to enjoy. It’s well worth listening to – you might find you want to ignore the mute button while playing this game!

The Claws v Paws slot game also has an excellent range of bonus features on offer, and far more than many other Playson slots. We recommend that you make a point of looking out for Claws vs Paws at your favourite online casino. It packs a real punch that will keep you coming back time after time. This is a truly ‘pawsome’ game that really is the cat’s whiskers when it comes to superb slots entertainment. Try it today!

🎰Can I play the Claws vs Paws slot for free?
Yes, if you head over to the Playson website you can find all of their slots are available to play in demo mode for free. Playing games in demo mode can be a very useful thing to do. Many experienced slots players play games for free before they try them when real money is at stake. You can become properly familiar with all of the features and shape a strategy accordingly.
🎰Where can I play the Claws vs Paws game?
You can play Claws vs Paws at a wide variety of online casinos, thanks to the licensing and partnership deals that Playson has in place. You can find an up-to-date list of Playson casinos here at this website. The list is being added to all the time as new casinos spring up. As well as Claws vs Paws, you can find plenty of other great Playson titles, such as Gold of Wild Sea and Solar Queen, at casinos like Mr Green and Leo Vegas.
🎰Is Paws and Claws a branded slot?
No, this is not a game that is branded by a TV show or movie. The dog and cat in this game are creations of the game designers and are not taken from anywhere else. Playson has not yet crated any branded slots of this type. There is, though, a game based on the legend of Dracula, called Dracula’s Family, as well as Odysseus, based on the adventures of the mythic Greek hero. They are perhaps the closest to branded titles that you will find in the Playson range.