The fox in the henhouse may be an old saying but it seemed an unusual theme for a slot to us before we reviewed the Chicken Fox slot from Lightning Box Games. It turns out it’s one of those slots that is set down on the farm, so we buckled in for some bucolic fun.

So does this slot provide you with plentiful carton fun and bountiful bonus features? You’ll need t read this Chicken Fox slot review to find out! 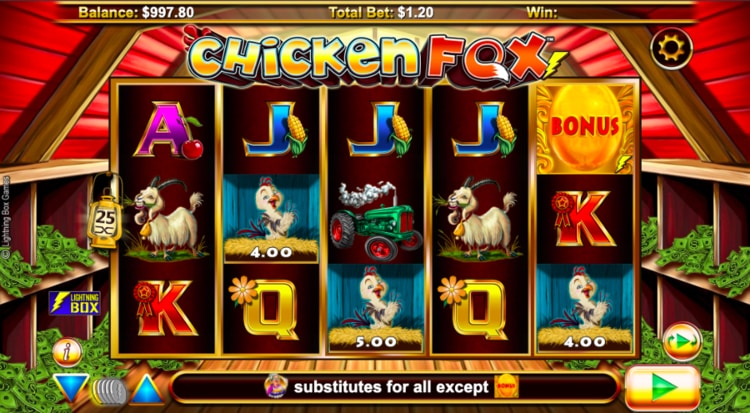 The Chicken Fox slot machine is played on a grid with 5 reels and 3 rows. There are 25 paylines available, and you can’t adjust this number. The game is a fairly recent addition to the Lightning Box range of slots, having been released in January 2019. The game uses HTML5 technology so has been optimised for play on mobile devices without there being any compromise in quality.

The minimum bet that UK players can place is usually 30p and the maximum is £240. The jackpot is worth 500x your stake. There is an autoplay feature, and you can set this to operate for a specific number of spins up to a maximum of 100. There is a pay table in the game that you access via the I tab. The value of each symbol is located here. You can also see how the paylines are set up if you look in this section.

It is also worth knowing that this game is a high variance slot. You need to show some patience as you wait for the big wins to arrive. It can be tricky to trigger the feature because of the games’ high variance, but we found that when the feature did come along, the wins it generated could be very lucrative indeed.

Get Down to a Cartoon Farmyard in the Chicken Fox Game

The Chicken Fox slot game looks really good. It uses cartoon style graphics, and if you grew up watching kids TV shows you’ll already have a fairly good idea of what this game looks like. The reels are set in front of a farmyard scene complete with henhouse. There is plenty of visual detail to help pull you into the world of the game, and you’re soon immersed in the action.

The animal characters and other symbols have some genuine charisma, and the animation is smooth and slick as the reels spin. When you spin in a large win the fox runs across the reels to chase a chicken, which is an appealing little touch that we enjoyed.

A lazy musical soundtrack features banjo notes and chicken clucks, and although not bad as music goes, it can become a little jarring as you play. The mute button is a welcome friend with this game. The reels click as they spin, and there are some extra chicken clucks to help you celebrate line wins. The sound effects are high quality, but a little bit grating after a while, we found.

The lower value symbols on the reels are the number 10, plus the letters J, Q, K and A. They are rendered in a brash style in big, bold colours, and are adorned with crops like cherries and sweetcorn according to their colour. The higher value symbols are farm animals and a tractor. You’ll see 4 different chickens, as well as a pig and a goat. These symbols look really impressive, with enough detail to give each a recognisable character of its own.

The special symbols are also easy to spot. The farmer’s wife with a steaming hot pie in her hands is the wild symbol in the base game. She can replace all other symbols to form winning combinations on the reels, apart from the golden egg bonus symbol. That golden egg scatter symbol plays a key role in the game’s bonus feature, which is what we’ll look at next.

While this game has only one real feature in the shape of free spins, there are plenty of modifiers and additional features to the bonus that make it interesting. We’ll take a closer look at all aspects of this bonus in the Chicken Fox slot machine here.

The free spins feature is triggered when you see the golden egg bonus symbol on the reels. If 3 symbols appear, you will receive 8 free spins. For 4 bonus scatter symbols, you’re awarded 15 free spins, and for 5 symbols you get 30. That’s pretty generous in terms of the number of spins on offer. The spins cannot be retriggered, though, which is a bit of a shame. There are all of those additional features to help boost your winnings, though, so let’s give you the details about those now.

We have to say that we enjoyed the Chicken Fox slot. The bouncy, brash graphics and the cartoon characters on the reels give this game a really fresh, fun feel. The bonus feature also offers some great opportunities to win big prizes, and there’s some entertaining animation to enjoy too. All in all, although the game is pretty simple, it’s a solid, all-round slot.

So we’ll end this Chicken Fox slot review by recommending that you give this game a spin. If you’re a bit partial to games set down on the farm, then you might want to have a look at Wild Turkey from Net Entertainment, or possibly Hen House by RTG.

🎰Do I need 4 of the same chicken symbols on a payline for a win in the Chicken Fox slot?
There are 4 different chicken symbols on the reels in this game. They range from a tiny chick that is hatching from the egg to a majestic cockerel. You do not need the chickens on a payline to be exactly the same to get a win. The chickens can be mixed. If you get 3 chickens you’ll win 15 coins, for 4 it’s 50 coins and for 5 it’s 100 coins. So watch out for those chickens!
🎰Can I play the Chicken Fox slot for free at the Lightning Box Games website?
Sadly, free play options are not available at the developer’s website for the Chicken Fox slot game. This is a shame, as playing games in demo mode can be a good way of sharpening up your strategy. If you have an account at an online casino, though, and it features Chicken Fox, you should still be able to try the game for free. If you want to find out which casinos feature Lightning Box slots, use the list we feature at this website.
🎰Do you have any Chicken Fox strategy tips?
As with all slots, you are at the mercy of the Random Number Generator in the Chicken Fox game. You can, however, do a few things to maximise your chances of success. As this is a high variance slot, you will need to show some patience when it comes to the feature. This might be the best tip we can offer – stick with the game, manage your bankroll carefully and be patient. When the feature does arrive, it can generate some huge wins.