Cool isn’t a word that you associate with slots very often. But Chicago Gangsters from Playson is definitely that. It’s probably got something to do with the smoky jazz music that soundtracks the game. Or perhaps it’s the 1930s cartoon graphics.

Whatever it is, you can read more about this enticing game in this Chicago Gangsters slot review. There’s plenty of prize-winning action to be found as well as great sounds and images. This is a slot that is sure to have you coming back to it time after time. 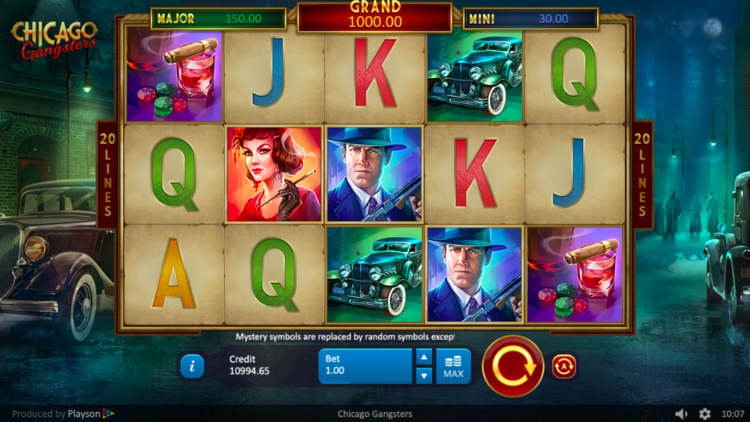 Chicago Gangsters is one of the newer games in the Playson range, having been released in September 2018. You can bet from 0.2 currency units up to 100 units, so high rollers and low rollers are both welcome in these Chicago streets. There are 5 reels, 3 rows and 20 paylines of action on offer. Symbols cannot appear stacked on the reels, apart from when they are mystery symbols. We’ll talk about these mystery symbols later on in this Chicago Gangsters slot review.

The game has a relatively low RTP of 95.39%. It is important to remember that RTP can only ever give a rough guide as to a game’s performance. Chicago Gangsters has a medium to low volatility, meaning that big wins can be paid out but not especially frequently. This is a game that should appeal to newcomers to slots gaming as much as it does to veterans.

As you might already have guessed, we really like the way this game looks and sounds. The sound, in particular, is so much better than what you find in most other online slots. In the majority of slots, the mute button is your friend. Even the catchiest tunes that play become annoying. There is no need for the mute button in the Chicago Gangsters slot.

We have no idea who composed the musical score for this game but we would like to shake their hand. The jazz music used in this game is genuinely good, providing a really immersive atmosphere. The sound effects consist of some satisfying clicks and swishes. As well as the great music, though, the game also looks great and certainly has a much more sophisticated atmosphere than Playson’s other crime-related slots, Art of the Heist and Claws vs Paws.

Hit those mean streets in the Chicago Gangster slot

While the graphics do not have the obsessive detail that you find in some games, they are beautifully rendered in a cartoon style. This game looks like a pulp comic from the mid-20th century, and the reels are framed in front of a misty night-time, Chicago street scene from the 1930s. The lower value symbols are the usual selection of numbers and letters. The higher value symbols are characters like the gangster and his moll, as well as a car and an image of some poker chips and a drink.

There is a poker chip too, and this is the game’s bonus (scatter) symbol. The wild symbol depicts the Chicago skyline. This will substitute for all other symbols apart from the scatter symbol. If 6 or more of the bonus symbol appear on the reels then you will trigger the game’s bonus feature. We’ll take a closer look at the bonus feature in the next section of this Chicago Gangsters slot review.

The game has a very a classy feel overall, something that tends to hide just what a simple game it actually is. This slot does not have the challenging bonus features that many contemporary slots do. Yet it never feels like you are playing a very simple game. The way that the sound and graphics create a sophisticated and immersive atmosphere means that the game feels much more sophisticated and complex than it actually is.

Look Out for the Jackpots in the Chicago Gangsters Bonus Feature

The original 6 bonus symbols that triggered the feature stay locked in place on the reels during the free spins. No other symbols are used, apart from the bonus jackpot symbols, which we will explain later. You are initially given 3 free spins. You can pick up extra free spins every time a new bonus symbol spins in, though. When this happens, you are awarded one extra spin.

During the free spins, every bonus symbol that spins in has a multiplier value. These range from 1x to 48x your stake. Once the free spins are completed, all the multipliers from all of the bonus symbols on the reels are added together. This gives you your total win, and it can be huge.

Another nuance in the bonus feature is the presence of special jackpot bonus symbols. You can win the mini, major or grand jackpots if the right symbol appears on the reels during the free spins feature. The mini jackpot is worth 30x your stake, the major is worth 100x and the grand jackpot will give 1000x. It is well worth keeping your eyes peeled for these symbols during the Chicago Gangsters bonus round. All it takes to win the jackpot is for one of the jackpot symbols to appear.

In addition to the main bonus feature, you can also benefit from the appearance of mystery symbols on the reels. These initially appear blank like the reverse side of a playing card, before all turning into the same symbol. This can really boost your chances of collecting a big win and is a nice extra feature in the game.

We really like this game. But that is probably because we appreciate the effort that its designers have gone to in making it sound and look so good. In truth, although the game looks good, it sounds a whole lot better. The jazz soundtrack makes this game a real treat to play, and it really helps immerse you in the game’s world.

As well as the great sounds, though, there is plenty of prize-winning action to enjoy too. Although the game does not have the most exciting bonus feature ever, it is still pretty entertaining, and the presence of three separate jackpot prizes adds an extra frisson of excitement to things. When you compare it other games with a similar theme, such as Net Ent’s Kings of Chicago, we think it more than holds its own, especially when it comes to the soundtrack.

Overall, we have to recommend the Chicago Gangsters slot game. Even if the slick gameplay, pulp cartoon graphics and entertaining bonus feature don’t appeal to you, the music will.

🎰Can I play Chicago Gangsters for free?
If you want to play the Chicago Gangsters slot for free then you should head over to the Playson website. There, you can play all the slots from this developer in demo mode for free. This is a good way to familiarise yourself with all the game’s features and nuances before you risk any real money playing it. Many experienced slots players use demo mode to sharpen up their slots strategy. It is a good way to get used to the bonus features of a game.
🎰Can I play Chicago Gangsters on my mobile device?
Yes you can. Chicago Gangsters looks and sounds just as good on your mobile phone or tablet as it does on your desktop computer. All Playson games use HTML5 technology, which means that they can be played on a wide variety of device types and sizes without there being any compromise in quality. Make sure you plug your earphones in so that you can enjoy the great soundtrack while you are on the move!
🎰Where can I find online casinos with the Chicago Gangsters slot?
Thanks to Playson’s licensing arrangements and partnership deals, you can play this slot all over the world. If you‘re looking for a top online casino then you should check out our list of casinos here at this website. Our list is being updated recently so you should be able to find all the very latest Playson casinos here. You can certainly find one that offers you the chance to play Chicago Gangsters.