Book of Ra Deluxe – A Much Needed Revamp

If ever there was ever a slot that needed a face lift, it had to be Novomatic’s Book of Ra. The classic first entered the online world in 2004 but has been a winner in land-based casinos, long before then. In fact, the initial Book of Ra had an arcade feel to it, which for the times was perfectly acceptable. With technology improving by the second, it was only a matter of time before a sequel was released.

Did Novomatic do enough to keep up with the fast-paced industry whilst offering players a slot game to get nostalgic about? Read on as we take you through it all in our Book of Ra Deluxe slot review. 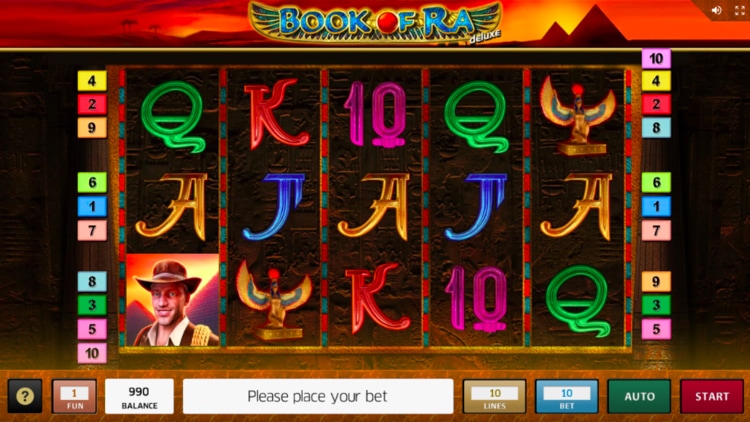 In many ways, the Book of Ra Deluxe game is similar to its prequel. Novomatic stuck to video slot industry standards of 5 reels and 3 rows. If it isn’t broken why fix it right? They did however add in an extra payline for a total of 10. 9 payline slots are slowly dying out.

This is the first example of their efforts to keep up with the Joneses. Striving for innovation may be well and good but remember that classics will always be classics. Let’s not forget about simple slots like NetEnt’s Dead or Alive which still come out on top to this day! At the time of release, many questioned Novomatic’s decision to stay so true to the original Book of Ra. Perhaps this is the answer!

As mentioned previously not much else has changed in terms of slot details. Book of Ra Deluxe has followed suit in that it is classified as offering medium volatility. Other details to be aware of are the minimum coins per line, set at 1 up to a maximum of 100 coins. Currency plays an important role in the minimum and maximum bets. As a general rule, these range from anywhere between €/$/£0.10 and €/$/£500 . The maximum coin size per line is also 1 coin. Flexible bet ranges along with a handy autoplay feature, makes this slot game one of the more user-friendly ones around.

One area where Novomatic has really pulled their socks up is RTP. Set at 95.10 %, Book of Ra Deluxe RTP is almost 3% higher than the original slot game. Low RTP was actually one of the most criticised features of Book of Ra when it initially launched online. Then again, compared to similar slots such as Ancient Egypt by Pragmatic Play, anything below 96% is still considered sub-par. When you consider that RTP is set even lower for players in the UK (94.26%), this could potentially become a deal breaker for some. It is however still one of the most popular Egyptian themed slot games of all times, so they must be doing something right. Read on as we delve deeper into Book of Ra’s claim to fame.

Previously we described Book of Ra Deluxe online slot game as the newer version but in actual fact it was released in 2008. At the time, it was definitely seen as an exciting remake of the original title. This said, if we have to be honest, it is starting to show its age, which is particularly evident in this next section. As mentioned earlier on Book of Ra first gained its reputation in land-based casinos. It comes as no surprise that the sequel has that same brick and mortar feel to it.

There have been serious improvements in the graphics of Book of Ra Deluxe but then again, it’s far from innovative. Quality over quantity seems to be the theme they have stuck to with this one. The majority of symbols are made up of the regular 10, J, Q, K and A panels. Players will however get glimpses of the Ancient Egyptian theme throughout the game. Examples include scarabs, pharaoh mask as well as the Book of Ra itself. There’s also an explorer’s symbol that could potentially pass off as Indiana Jones, at least from a distance. We told you design wasn’t a strong point here.

If you thought the design was rather rudimentary, then you won’t be too impressed by the Book of Ra Deluxe’s audio. The theme music resembles that of a regular fruit machine. If you turned away, you’d actually be hard pushed to notice the difference. No signs of Ancient Egypt here, at least not unless you score a Book of Ra symbol. Even then, you’ll be hard pushed to make the connection with the slot’s theme. When you compare this to the over-dramatized theme music of ‘Book of the Dead’ by Play’n GO, you can start to understand why some copy-cat slots were able to compete. Nevertheless, some players still like to stay true to their roots. Book of Ra Deluxe’s sheer and utter simplicity could just be what this particular niche is looking for. You know what they say about style over substance after all.

Bonus Features and Games in Book of Ra Deluxe

Simplicity has been a recurring them throughout this Book of Ra Deluxe slot review. Of course, there aren’t going to be any progressive jackpots or complicated bonus rounds. It’s a retro slot game in many aspects and the same goes for this next section. For starters there’s a red and black gamble feature. This is triggered whenever you win and gives you the opportunity to increase your winnings. As this is a gamble feature, there’s also the risk of losing everything. Here’s how things work below.

Additionally, there is also a wild and scatter symbol. Once again, Novomatic has kept things basic here by using the same symbol for both, the Book of Ra itself. We have provided another list below to explain how each of the symbols work.

Free spins has always been a big part of Book of Ra. It was to be expected that their sequel would follow suit. This is actually the only glimpse of complexity in the entire slot game. Even then though, triggering Book of Ra Deluxe free spins is easy, or rather sounds it. Players need only hit 3 scatters and they’ll receive 10 free spins in return. This is only the half of things though. What really sets this free spins round apart is the special expanding symbol which is also activated. As the name suggests, it expands over the reels to further increase chances of winning and payouts. Hit an explorer on each reel and that you could end up cashing out 5,000x your stakes. Just like the story of Indiana Jones and buried treasure!

For the Nostalgic Players Among Us

This isn’t the most modern slot game out there. But it won’t take reading this Book of Ra Deluxe slot review to figure that one out! It is however the perfect take on a classic slot that has been around for decades. Add in some fine tuning to improve RTP and its pretty clear why Book of Ra Deluxe is even more popular than its prequel.

There have been multiple attempts by various providers to steal the spotlight. Yet Novomatic continues to come out on top. This in itself should be enough to make you want to take this slot for a spin!