It’s All About Digging for Gems in the Bonanza Slot

Slots developers like to use the theme of a gem mine as a theme, and Bonanze from Big Time Gaming is another slot where players venture underground in search of precious stones. The Bonanza slot machine also uses the Megaways concept to add a touch more adventure to your mining forays.

This Bonanza slot review will take a closer look at the slot. You can find out all about the features, the graphics and who played the banjo on theme tune. Read on to discover more! 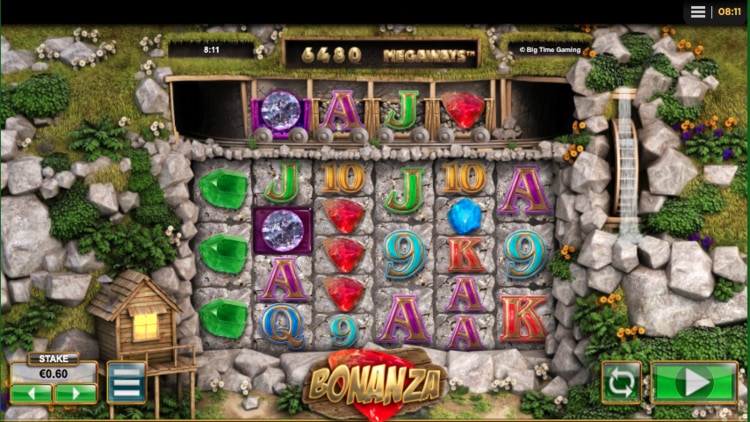 Key Details of the Bonanza Slot: It’s All About Megaways

Bonanza is played on a grid of 6 reels and 3 rows, though this number can change thanks to the use of the Megaways concept. Symbols can change sizes, and there can be as many as 117,649 ways to win on a spin. The reels are also supplemented by the presence of a mine cart. This sits above the reels, and adds an extra symbol to the second, third, fourth and fifth reels on each spin. This can boost your chances of winning.

The maximum payout for UK players is a massive £250,000, so lucky players can really take home some significant prizes. The minimum bet is 20p and the maximum is 500. If you like to play Bonanza slot on mobile devices, you’re in luck. The game utilises HTML5 technology, so can be played on a wide range of devices of differing types and sizes. The game was released in December 2016, and has established itself as a very popular title over the last 3 and a half years or so.

What is the Bonanza Slot RTP?

Some slots players like to base their strategy around a game’s RTP. This is not the best idea, as RTP can only ever provide a very rough guide to how a game will perform. What might be of more use you when it comes to Bonanza is the fact that the game has a high variance. This means that you are more likely to trigger infrequent large wins than you are to pick up frequent smaller wins. When we played the game, we actually found it very hard to trigger the feature, even when we set our bet limits towards the upper end of the scale. Hopefully you will have better luck when you play.

Mine in the Mountains When You Play Bonanza Slot

The game’s reels are set on what seems to be the entrance to a diamond mine. A water wheel spins in the top right corner, and there is a miner’s hut in the bottom left of the screen. Ivy, ferns and flowers grow all over the mountainside in which the mine has been sunk. There is plenty of detail in the graphics, but they are not among the finest we have seen in slots.

You should also keep a close eye on the cart that sits above the reels, as symbols will appear here that can be added to the symbols on the reels. All symbols on the normal reels can appear stacked. Gameplay is smooth and there is nothing clunky or clumsy about the way the reels spin. With the Bonanza slot, BTG have certainly produced something that has a slick feel to it, even if it is not the classiest slot we have ever played.

Listen Out for the BTG Boss Playing Banjo

The game sounds good too, with the cartoon style sound effects helping to create a fun atmosphere. There is also a banjo-driven theme tune for you to enjoy as you play. We have read that Big Time Gaming CEO Nik Robinson played the banjo himself. If true, he’s certainly a pretty nifty player. The music is well-produced and melodic enough. Those banjo tones may well start to get on your nerves after a few spins, though, as there is something a little grating about their constant cheerfulness. But the music certainly works as a bouncy scene-setting theme tune at the beginning of the game.

The symbols can appear stacked on the reels, which boosts your chances of winning. The scatter symbols are the golden letters, and we’ll look at the part they play in the game in the next section of this review. The wild symbol is the bunch of fizzing dynamite, and this will substitute for all other symbols apart from the scatter to create winning combinations for you.

There are 2 features in the Bonanza slot game for you to enjoy. There is the Reactions feature, which is part of the Megaways concept, and the Free Spins feature. We will take a closer look at both of these in more detail here.

Play the Bonanza Slot Online for Some Big Reactions

Overall, we liked the Bonanza slot. Big Time Gaming has certainly produced a game that looks and sounds good, and provides some reasonable entertainment. We were a little disappointed that triggering the feature seemed so hard when we played it, though we did pick up plenty of conventional wins on the reels. The Reactions feature also provided plenty of wins on a regular basis.

So this Bonanza slot review will conclude by saying that we recommend that you try this game for yourself. If you like mining-themed games then you might also want to try Gold Rush by Pragmatic Play, or Diamond Mine from Blueprint Gaming.

🎰How can I find out how to win on the Bonanza slot machine?
If you want to find out what all the symbols are worth in the Bonanza slot, Big Time Gaming have provided a paytable in the game for you. If you click on the info icon, you will see that the most valuable symbol in the game is the purple tinged diamond. This pays 50 times your stake if 6 of it spins in on a payline, and 25 times your stake for four.
🤔Where can I play bonanza slot online?
If you want to find out which casinos are hosting Big Time Gaming’s Bonanza slot, the best thing to do is to check back as often as possible at this website. We feature an up-to-date list of casinos where you can play BTG’s slots. You can also see which casinos are offering the most tempting welcome bonuses to new players. New Bonanza slot sites appear online all the time, so make sure you check back regularly and don’t miss anything.
💎Do I need to know how to win gems on the slot Bonanza from Big Time Gaming?
You do not need to know how to win gems as this is not part of the game. Some slots require you to collect gems to trigger progressive jackpots, but not this one. Holmes and the Stolen Stones from Yggdrasil incorporates this feature in its gameplay. But in Bonanza it is the golden letters that are the key objects when it comes to winning prizes.