Vampires have been an inspiration for slot creators for many years now, so we aren't surprised that Iron Dog also decided to introduce their own bloodsucking game named Blood Queen. Apart from the scary atmosphere, this slot brings a few exciting bonus features, including 3 types of special wild symbols and a bonus round that can bring you up to 50 free spins in a single batch. All of you who want to get a closer look at this game and learn everything there is about its special features and bonuses, feel free to read our detailed Blood Queen slot review. 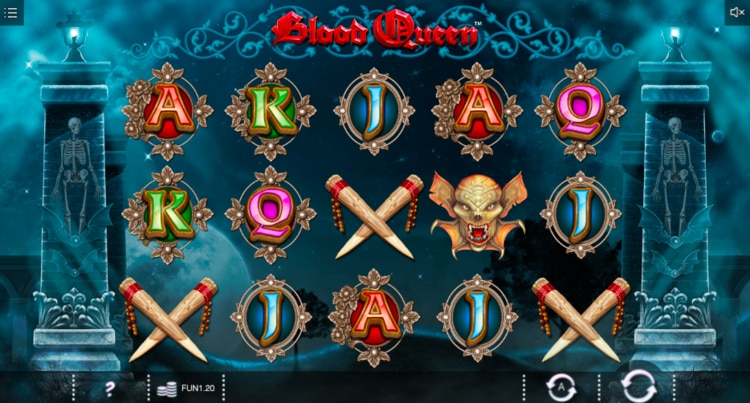 Blood Queen is a 5 reels slot with 30 fixed paylines. Symbols are sorted in 3 rows, making this a very wide looking game. So, in case you want to give it a spin on a phone, you may be better off playing in a landscape mode. The lowest stake possible is £0.30, which is a bit higher than average. On the other hand, all of the high-rollers among you should be pleased since the max stake sits at comfortable £90 per spin.

As all other Iron Dog games, Blood Queen also comes with an excellent autoplay feature. It lets you set a number of automated spins anywhere between 5 and 999. Also, you can make it stop when:

With a return to player rate of 96.07%, we can barely say that the Blood Queen slot is above the market average. If you're into vampire-themed slots, note that NetEnt's Bloodsuckers comes with a significantly higher RTP of 98%. Also keep in mind that Blood Queen is a medium variance slot, meaning that it has an excellent balance between hit rate and average award size.

Iron Dog once again showed that they are masters of game design. Blood Queen looks super clear, so we believe that even the pickiest players will be satisfied. Colours are mostly dark, but still very vibrant, which perfectly adds up to the ominous atmosphere of the game.

You'll see a big full moon in the background and gothic pillars with skeletons on the side of the reels. Those skeletons will move from time to time, making Blood Queen even spookier. We especially liked the animations during bonus rounds, for example, when you land the expanding wild or the special Blood Queen Wild.

The music perfectly follows the overall atmosphere of the game. It feels more like a movie soundtrack than a background of a slot game. Every time you enter the bonus round or score a winning payline, the music speeds up, making the game even more exciting. Blood Queen reminded us of the Vampire Hunters slot, both in terms of audio and video features. So, if you already liked that popular 1X2 Gaming title, you should give Blood Queen a chance.

All of the higher-paying symbols in Blood Queen have something to do with vampires. There are spikes and monsters, while the highest paying symbol is the Blood Queen herself. The rest of the paytable is filled with usual card symbols, but Iron Dog's designers made sure that they have looks to match the overall atmosphere of the game.

The Blood Queen slot includes a few special symbols, like the Gargoyle, which acts as the Expanding Wild, while the Heart-Shaped Free Spins symbol triggers the free spins round. There are two more wild symbols, but they show up only during the bonus feature, which we will talk more about in the following section.

The Blood Queen slot has one highly-rewarding bonus game which includes a plethora of free spins, as well as two special wilds. Note that you can land the Expanding Gargoyle Wild symbol during both the base game and the free spins. It will cover the whole reel with wilds that can substitute for any other symbol apart from the Free Spins symbol. There can be more than one Gargoyle Wild at the same time.

The free spins feature starts when you land 3 or more Heart-Shaped Free Spins Symbols anywhere on the reels. The more of these symbols you land, the more free spins you get. Here is how many you can get:

Before free spins start, you get to choose between two possible rounds - the Blood Queen bonus game or the Van Hell bonus game. These games are very similar, but with only one crucial difference. If you choose the Blood Queen game than the Blood Queen Shifting Wild Reel feature may trigger during the bonus round, while for choosing the Van Hell game you'll get a chance to land the Van Hell's Holly Water Expanding Sticky Wild. This is what those symbols do:

It may not be groundbreakingly innovative, but the Blood Queen slot is definitely lots of fun to play. The expanding wilds and two free spins rounds in one should be enough to satisfy even the most seasoned casino players. It would be even better if there was one more bonus round available, just to add another level of excitement to the game. But even as it is, the Blood Queen slot is worth your time. No matter if you're into vampire slots or not, this Iron Dog game will charm you with its spooky atmosphere and rewarding bonuses.