WMS Gaming have made a foray into the medieval world with their Black Knight 2 slot. But this revamped version of a previous hit surely can’t improve on the original slot can it?

Well, we think it does and we’re sure that once you’ve read this Black Knight 2 slot review you’ll agree with us. We’re about to cross-examine this game’s superb sound effects, immersive graphics and entertaining bonus features. Read on to find out just how much there is to this slot! 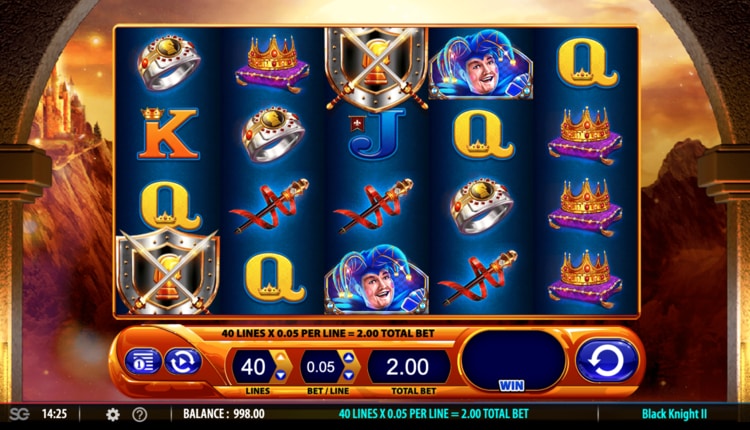 The Black Knight 2 slot is played on a grid of 5 reels and 4 rows. The minimum bet is £0.04 and the maximum is £120. The bet levels can be adjusted via tabs beneath the reels. You can also use these tabs to adjust the number of paylines from just 1 right up to the full complement of 40. This will affect the size of your total bet. The game calculates the total bet by multiplying the number of lines by your stake. It then displays this figure for you, which makes bankroll management easier.

What is the RTP of the Black Knight 2 Slot?

The RTP of this particular Black Knight slot game is given as 95.91%. This is not an untypical figure for one of WMS Gaming’s slots. That said, it is slightly below the industry average of 96%. The game is moderately volatile, so should appeal to a wide variety of gamers.

The I tab is located in the bottom left corner of the screen. This is where you can access the game’s paytable as well as further information about the paylines and feature. There is an autoplay button. This can be set to run for a specific number of spins, from 5 up to 100. It can also be set to end when you have lost or won a specific amount of money. Black Knight slot 2 was released in 2014.

The Black Knight 2 slot has a colourful look to it, overall. The reels are framed in simple gold. They are set in front of an arched window. Through this you can see some golden mountains and a twinkling golden sky. It looks good enough without being especially impressive. The real colour in the game is found on the reels themselves.

When the Black Knight 2 slot opens, you hear a trumpet fanfare sound. Then the crowd roars, as though cheering the entrance of a champion knight to a tournament arena. There are also some impressive ambient sounds that play as the reels spin. These include a crowd chattering, horses whinnying and the sound of swords clashing. They certainly immerse you in the game’s world and we liked them.

When it comes to the symbols on the reels in the Black Knight 2 slot, the lower value ones are the usual array of letters associated with playing card values. The higher value symbols are more interesting. They all link to the theme of the slot in some way. You’ll see a regal, bearded king, a princess, a grinning jester, a mace, a ring and a crown on a cushion. There are also some special symbols to watch out for. We’ll tell you about those in the next section of this Black Knight 2 slot review.

There are 3 aspects to the Black Knight 2 slot that can be described as bonus features. To trigger the features, you need to watch out for 2 special symbols. These are the wild and the bonus symbol.  The wild symbol is a knight on horseback. The bonus symbol is the game’s logo. We’ll take a closer look at all 3 of these features here.

As you spin the reels of the Black Knight 2 slot you will notice that the higher value symbols can appear stacked. This means that they take up more than 1 space on the reels. This is useful, obviously, as it can help create more winning combinations for you. It can also substitute for the bonus symbol. If this happens, it can only count as 1 symbol, though, however many are in the stack.

The wild symbol in the Black Knight 2 slot is really useful. In most slots, the wild cannot substitute for the scatter symbol. But in Black Knight 2, it can. This is an aspect of this game that we really liked, and it adds a nice touch of originality. This particular wild knight on horseback can therefore help you trigger the free spins feature, something we’ll look at next.

The wild symbol only appears on reels 2, 3 and 4. There’s no need to worry too much about this limiting your opportunities to win, though. Like all of the high value symbols in the Black Knight 2 slot it can appear stacked. This gives your chances of triggering the free spins a considerable boost, as well as increasing your chances of conventional wins.

The free spins feature in the Black Knight 2 slot is triggered when 3 or more of the bonus symbols appear on the reels on a payline. You will receive 7 free spins. The wild symbol can appear during these spins. It can appear stacked, but will only appear on reels 2, 3 and 4. If the wild does appear during the free spins will expand to fill the entire reel. This stacked reel will then lock in place for the rest of the feature.

If you reduce the number of paylines in the Black Knight 2 slot as part of your careful bankroll management then your chances of triggering the feature remain the same. This offers some reassurance to players who prefer to play with lower stakes.

This Black Knight 2 slot review can end on an upbeat note, as we enjoyed this game. While the free spins feature is a bit on the simple side, the stacked wilds are a really nice touch. There is also plenty to enjoy in the game’s immersive sound effects and relatively detailed graphics. Although Black Knight 2 is not the best slot we have ever reviewed, it certainly holds its own among the range of medieval-themed slots on the market.

If you like stepping back in time to the Middle Ages, you might also want to try Crusade of Fortune from Net Entertainment, Ivanhoe from ELK Studios or possibly Avalon from Microgaming.

What is the most valuable non-special symbol in the Black Knight 2 slot?
Apart from the wild and the bonus symbol, the most valuable symbol on the reels in the Black Knight 2 slot is the king. If you land 5 of this regal chap on a payline you can expect to receive a prize worth 12.5x your stake. If you want to know what each of the symbols in the game is worth, click on the I tab and consult the paytable. You’ll find everything you need there.
Where can I play Black Knight 2 slot?
The Black Knight 2 slot can be played at a host of online casinos. The best way to find a good online casino is to check the list of operators that feature WMS Gaming’s titles. You can do that by using the list on this website. We update the list on an ongoing basis as new operators pop up all the time. You can also use this list to see which online casinos are offering the most tempting bonus offers.
How many free spins can I get when I play the Black Knight 2 slot machine online?
When 3 or more bonus symbols appear on the reels you will receive an initial 7 free spins. This seems a little measly, especially when compared to other WMS slots such as Viking Vanguard, where you can pick up dozens of free spins. You will not receive any additional spins either, as the feature cannot be retriggered. The stacked wilds that lock in place during the bonus feature do compensate for the somewhat ungenerous number of free spins, however.