Get ready for a Jungle adventure with Ainsworth Gaming Technology’s Big Thunder. This game centers around a rainforest and a thunderstorm that happens in it. This might be a game from all the way back in 2013, but in many ways, it feels like it has the best elements of some of Ainsworth’s later slots, like Jade Emperor and Mighty Wilds, all put together.

The real question, though, is whether Ainsworth’s Big Thunder is entertaining enough to keep players engaged. Keep reading our Big Thunder slot review below to find out! 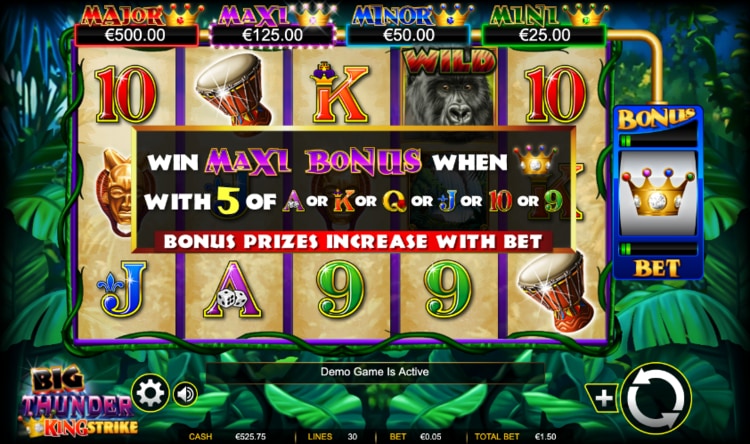 Big Thunder is a slow played on 3 rows, 5 reels, and a 6th, special reel. The game features up to 30 paylines, though players can reduce this to as little as two paylines if they prefer. Players can wager between £0.30 and £3000 on a single spin, which covers basically every type of player from the most casual to the highest roller.

As far as the potential for wins, goes, the biggest possible win in the base game is you’re your stake, which is definitely decent. In addition to that, though, the game features several jackpot prizes that vary depending on how much you wager on a single spin. These jackpots range between £20 and £1,000,000, but we’ll get into more detail about these below.

As is standard for Ainsworth Gaming Technology slot games, the autospin feature has a maximum of 25 autospins, so players should have their mouse ready to reactivate the feature every 2 to 3 minutes.

Big Thunder has a theoretical RTP of 94.38%, which is pretty typical for an Ainsworth slot game. In terms of variance, Big Thunder is a low to medium volatility slot, though big wins are still possible. This means that players can expect a steady stream of medium and small wins, without having to sacrifice the possibility to earn larger amounts.

We’re going to get the obvious out of the way right at the beginning: this is an Ainsworth slot game. It isn’t an audiovisual masterpiece, it isn’t a beautiful slot to look at, and the soundtrack won’t be your new favourite song.

The symbols fit in with the typical Ainsworth aesthetic. Plenty of photo-realism, plenty of gold borders, and ridiculous fonts. This isn’t the kind of slot that draws people in with its style or its looks.

However, the symbols are easily distinguishable from one another, the sounds can be muted, and whenever anything happens on screen, it’s easy to understand what’s going on. In terms of the minimum expected from a slot game’s visuals and UI, Big Thunder ticks all the boxes.

The Wild symbol is a Gorilla, and the Gorilla Wild only appears on reels 3, 4, and 5 in the base game. It can substitute any of high paying or low paying symbols other than the Big Thunder Scatter, the Crown, or the Multipliers.

The Crown symbol is a special bonus symbol that only appears in the base game’s 6th, smaller reel. This can only appear if the player lands a 5-of-a-kind win, and if it does appear, it will reward the player with a jackpot win, though we’ll discuss this further below.

The game also features two multiplier symbols: 3x and 5x, but these only appear during the bonus round, so we’ll explore those in more detail when we talk about the bonus features.

Unlike some of Ainsworth’s other games, Big Thunder actually has more than a single bonus feature. In fact, we’re quite big fans of how this game creates opportunities for players to win, and to record significant wins at that.

There’s both a Free Spins Round as well as a Jackpot feature up for grabs in Big Thunder. These are two, separate features, so we’ll speak about each of them individually:

Players will notice that during the base game there are four different jackpot amounts listed above the play area, a Major, a Maxi, a Minor, and a Mini jackpot. The exact amounts within each jackpot will depend on how much you’re wagering on a single spin.

In order to actually win one of these jackpots, players need two things to happen: to record a 5-of-a-kind win, and for the 6th reel to land on the Crown symbol. The sixth reel only spins on 5-of-a-kind wins, and winning one of the jackpots, even the smaller two, can make a massive difference to your winnings. The conditions required for each of the jackpots can be found below:

Players can, however, earn more free spins from within the Free Spins Round by retriggering the feature. This is the same as triggering the feature in the first place in that it requires at least three Big Thunder Scatter symbols to appear on the reels, and this can be retriggered multiple times if players are lucky enough, up to a total of 30 free spins.

The play area in the Free Spins Round is completely different from that of the base game. The Free Spins Round features 6 full-sized reels, and the 6th reel only features the Big Thunder Scatter symbol and the 3x and 5x Multiplier symbols. If a multiplier symbol lands in the 6th reel, any win on that spin will be multiplied by the amount listed on the symbol (i.e. 3x or 5x). Players should also note that landing 6 Big Thunder Scatters pays 200x their wager, so there are opportunities for significant wins here.

The Gorilla Wild also behaves differently in this round, as it can now substitute any symbols other than 3x and 5x multiplier symbols. The biggest change, however, is the reel strips. Many of the cells on each reel strip are empty, meaning some spins will result in reels only having a single symbol on them. However, the 6th reel, the multipliers, and the more generous pay table that’s applied in the Free Spins Round can lead to some truly massive wins here.

Final Thoughts – One of Ainsworth’s Best

Generally speaking, Ainsworth slots don’t tend to usually leave us impressed, however Big Thunder has certainly changed our tune. Between the four jackpots and the jam-packed bonus feature, Big Thunder definitely has what it takes to keep players engaged and have them coming back for more.

Our final verdict on this Big Thunder slot review: definitely give this one a spin for yourself. Big Thunder has enough going for it that you’re unlikely to end up disappointed, even if you’re used to more popular jungle-themed slots like Net Entertainment’s Gonzo’s Quest or Microgaming’s Jungle Jim El Dorado.

📈What’s the RTP for Ainsworth’s Big Thunder?
Ainsworth Gaming Technology’s jungle-themed slot, Big Thunder, has an RTP of 94.38%. This is average for an Ainsworth slots game, though still just slightly below the global slots average. In terms of volatility, Big Thunder is considered to be a low to medium volatility slot, though players still have the chance for some truly massive wins.
⭐How do I win a jackpot in Big Thunder by Ainsworth Gaming Technology?
Jackpots in Ainsworth’s Big Thunder can only be won by both landing a 5 of a kind winning combination, and also landing on the Crown symbol in the 6th bonus reel. If both of these conditions are met, players are treated to a jackpot win. For more information about how to win each of the four jackpots, specifically, read our section on the game’s bonus features above.
🎰Can I get free spins in Ainsworth’s Big Thunder?
Yes, Big Thunder by Ainsworth includes a Free Spins Round as a bonus feature. Players will need to land at least 3 Big Thunder Scatters to activate this round and get 15 free spins, and the feature can even be retriggered multiple times from within the Free Spins Round. For more information about what makes the Free Spins Round so special, read our Big Thunder slot review above.