Age of the Gods: God of Storms Slot Review 2022

If you’re a seasoned slots player then you have probably heard of Playtech’s Age of the Gods series of slots. These are games that use the theme of ancient deities, and there have been many of them released over the last few years. Age of the Gods God of Storms is one of the slots in this enduringly popular series.

In this Age of the Gods God of Storms slot review, we’ll tell you all you need to know about his game. Read on to discover more! 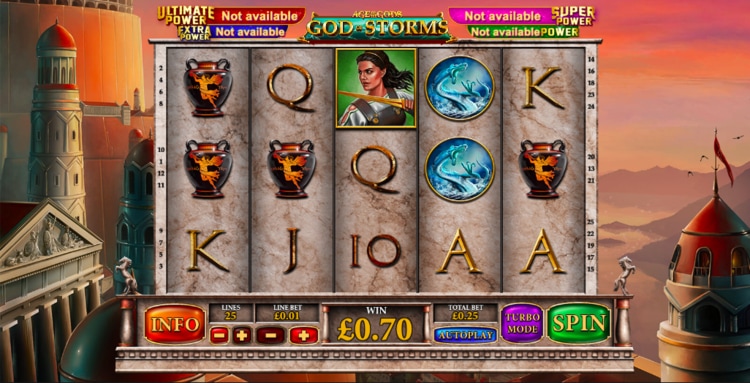 Age of the Gods - God of Storms Slot: The Details

Age of Gods God of Storms is played on a grid with 5 reels and 3 rows. There are 25 paylines. The minimum bet you can place is 0.2 coins and the biggest is 500. There is an autoplay feature if you want to take a more passive approach to the game. This will work for between 10 and 99 spins. A turbo play button gives you the option of speeding up the action if you get bored easily.

The game is optimised for play on mobile devices thanks to its use of HTML5 technology. Released in July 2016, the game is part of the extensive Age of the Gods series of games. You may well be familiar with other titles from the series, such as Age Of The Gods Prince Of Olympus or Age Of The Gods Furious 4. There is also a progressive jackpot on offer in this slot, and we’ll take a closer look at that later on in this review.

The game has a medium variance, so you should be able to pick up small wins pretty frequently, but also trigger the feature regularly for those big wins. When we played the game, this is how things turned out for us. Of course, the volatility changes to high if you are looking to win the progressive jackpot feature.

Enjoy a Lofty Viewpoint in Age of Gods – God of Storms

When you start playing the Age of the Gods - God of Storms slot you are taken to a lofty perch above an ancient city. From your viewpoint, you can see buildings, city walls and, in the distance, a river and mountains. In front of this backdrop, the reels are set in a stone frame, with the symbols sliding into place on what looks like a surface of stone. The graphics look decent enough, although there is not the same level of detail as you’ll find in more recent slots like Playson’s God of Wild Sea.

The symbols on the reels are fairly detailed and are rendered in a heroic cartoon style that looks pretty classy. The Greek amphora symbol certainly looks impressive, but the characters that are the game’s higher value symbols look a little bit generic. The lower value symbols on the reels are the usual range of numbers and letters. They are golden and look a little bit like Ancient Greek letters, which fits nicely with the game’s theme.

The 3 characters on the reels are a swordswoman, an archer and a male warrior in golden armour. These might well be representations of gods, but it is hard to tell. There is also an amphora and a sea monster that are pretty valuable. There is a wild symbol that appears stacked. It is simply the word ‘Wild’ so it’s easy to recognise. There is also the ship symbol that acts as the game’s scatter as well as being wild, and this also fills entire reels when it appears. It triggers the Wild Winds feature, something we’ll take a look at in the next section of this review.

The game’s sound effects are basic, but there are some nice ambient sounds that you hear as you play. The wind and the sea, as well as the calls of gulls, sound in the background, and you also hear the creak of your window frame as the breeze blows. There are some nice clicks and whirrs that sound when the reels spin. A little trumpet fanfare plays when you spin wins in, which is quite pleasant. There is no musical theme that you can hear constantly as you play, which will doubtless be a relief to some people.

The God of Storms’ Breath is the Key to your Bonus

The Age of the Gods - God of Storms game has one main bonus feature. But you can also pick up bigger prizes via the progressive jackpot. We will take a look at both of these features here.

There is only one real bonus feature in the Age of Gods – God of Storms slot. This is called Wild Wind and you’ll see the God of Storms himself in it. The bonus is triggered when the ship symbol appears that fills an entire reel.

The God of Storms himself then appears at the left side of the reels. You are also given a multiplier at the start of the feature that applies to all of the wins you acquire. This increases by x1 per free spin until the end of the feature.

He blows a gale that shifts the reel with the ship on it one section to the left. This happens after every spin until the full reel has moved off the edge of the screen. A final spin takes place without the full reel being present.

The feature provides some entertainment and is moderately exciting. We were left wanting a little more from it, though, especially as more recent slots tend to offer a little more player involvement when it comes to features. An example of this is like ELK’s Wild Seas.

The Age of Gods God of Storms jackpot prizes are 4 in number. The jackpot bonus game can be triggered randomly on any spin, but you have more chance of entering it if you are placing larger bets. The 4 prizes range through Power, Extra Power, Super Power and Ultimate Power, with each getting progressively larger, as you would expect.

The table below shows how much money each of the jackpots starts off with. Subsequent bets by players on the network add to these amounts.

* 0.99% of each bet made on the network contributes to the jackpot prize pot.

This Age of the Gods God of Storms slot review concludes by recommending that you try out this game. There is only one bonus feature, but it provides decent entertainment and some good chances to win. The presence of a progressive jackpot is another plus. The game is not at the top level when it comes to graphics and sound, but they do the job.

You can use this game as your gateway into your explorations of the Age of the Gods series. Alternatively, if you’re looking for slots with a similar theme, you might want to try Greek Gods from Pragmatic Play, or Titans of the Sun from Microgaming.

Age of the Gods God of Storms Slot FAQs

🎰How many wild symbols are used in the Age of the Gods - God of Storms game?
If you’re new to the world of slots gaming then terms like ‘wild’ and ‘scatter’ might confuse you. In Age of the Gods God of Storms there are two wild symbols used. One is a standard wild that simply substitutes for all other symbols to create wins for you. The other acts more like what seasoned slots players would call a ‘scatter’. This is the ship wild that triggers the game’s free spins feature.
🎰Is Age of the Gods God of Storms the best game in the series?
We would have to say that this game is not the best of the slots that bear the Age of the Gods name. It is certainly a bit limited in scope when it comes to bonus features, for example. The original Age of the Gods slot is still well worth a look, in our view, as it offers four variations of its free spins bonus. There is also Age of the Gods Furious 4, which has slightly better graphics.
🎰Who is the God of the Storms of the game’s title?
While it is impossible to say for certain which God of Storms is being used here, we think that Aeolus is the most likely candidate. He was the keeper of the winds in Homer’s The Odyssey. He helped Odysseus in that epic tale in a similar way to how he can help you succeed in this slot’s bonus feature.