We’re sure that you’ve heard of Alice in Wonderland but did you ever think that the works of Lewis Carroll could be the basis for a slot? We concur that it might strange, but the Adventures Beyond Wonderland slot from Ash Gaming has proved that it can be done.

In this Adventures Beyond Wonderland slot review we’ll take a look at whether the game provides a great deal of entertainment, as well as the chance to win plenty of big prizes. Read on to discover all you need to know! 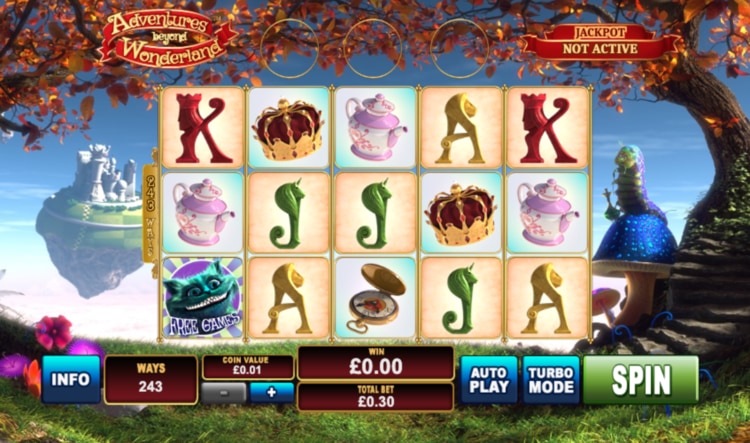 The Adventures Beyond Wonderland slot is played on a grid of 5 reels and 3 rows. There are 243 paylines in operation on the grid. You can increase this to 2187 ways to win, however, if you can add extra reels. We’ll look at how you can do this later on. The minimum bet you can place is 30p and the maximum is £150. The maximum win is 10,000x your stake.

What is the RTP?

The RTP of the Adventures Beyond Wonderland slot ranges from a minimum of 94.60% to a maximum of 96.02%. The variation in the rate comes from the presence of a progressive jackpot, which is something that we’ll take a closer look at later. That figure is pretty typical for a slot of this type, but relatively high for an Ash Gaming slot. Other Ash Gaming slots with a similar RTP include Batman And Catwoman Cash (96.01%) and Juicy Booty (96.03%).

There is an autoplay button, and you can set this to run for 10, 25, 50 or 99 spins to be played automatically. The Adventures Beyond Wonderland slot can be played on your phone or tablet with no reduction in quality thanks to its use of HTML5 technology. The base game of the slot has medium variance, so you can expect a variety of wins along the way as you play.

Visually, the Adventures Beyond Wonderland slot is very impressive indeed. The cartoon style graphics look very contemporary in style and have an almost hallucinatory quality that matches the weird atmosphere one finds in the works of Lewis Carroll. The reels are set up to resemble playing cards, which will make sense to anyone who has read the original Alice books.

Behind the reels is a rich and detailed world. There is green grass in the foreground, and a castle floating in a slightly misty blue sky above that. A winding tree stands to the right of the reels, and just in front of it the Caterpillar sits on his toadstool. The caterpillar is, of course, an iconic character from the Alice books. He is smoking his hookah, and he plays an important role in the game’s bonus features.

The sound effects are minimal but effective and very discrete music plays as the reels spin, which was an aspect of the Adventures Beyond Wonderland slot that we appreciated. Alice’s giggle was a nice touch of audio detail we enjoyed when we recorded a win.

The symbols on the reels are similarly impressive in appearance in the Alice Beyond Wonderland slot. The lower value symbols are the typical range of letters associated with playing card values, and they have a strange, chess piece appearance that is intriguing.

The higher value symbols are all associated with the Alice stories in some way, so you will see the Mad Hatter’s top hat, the White Rabbit’s watch, a crown and a tea pot.  Alice herself functions as the game’s wild symbol, while the Cheshire Cat is the scatter. We’ll look at the role they play in the game next.

Another impressive aspect of the Adventures Beyond Wonderland slot is the quality and variety of the game’s bonus features. We’ll tell you all you need to know about the game’s three bonus features here.

We have already mentioned, the caterpillar that sits on his toadstool at the side of the reels. As the action in the Adventures Beyond Wonderland slot unfolds he will blow bubbles from his hookah. These bubbles then float into circular spaces above the reels. There are 3 of these spaces above the middle 3 reels.

With each spin of the reels, the bubbles, which contain various bonuses and multipliers, move one space along to the left. During any spin, Alice can appear and tumble down the second, third or fourth reels. She will turn the entire reel wild, which can win you a prize, and she will also burst the bubble above the reel she falls down.

There are 4 possible bonuses that can appear in these bubbles. These are:

If you land the Cheshire Cat bonus scatter symbol on reels 1, 3 and 5 then you will trigger the free spins bonus feature in the Adventures Beyond Wonderland slot. The Cat will award a random number of free spins that are played out on a separate set of reels.

These reels spin horizontally rather than vertically, and each reel can move either from left to right, or right to left. The reels will also spin automatically.

The Cheshire Cat also takes on a different role during the free spins. He appears at the left side of the reels and places Cheshire Cat wild symbols on them at random intervals during the free spins. As well as substituting for all other symbols like a conventional wild, these Cats will also lock in place for a number of spins. They can also expand and fill 2 spaces on a row.

This will also create an extra reel for that row. They can create a maximum of 2 extra reels.  You cannot retrigger the free spins feature and the normal Cheshire Cat scatter symbols are removed from the reels during the feature in the Adventures Beyond Wonderland game.

Both the seed and the jackpot values are in Euros in the progressive network, so obviously UK players will need to be aware of how this will convert into pounds. You increase your chances of winning the progressive jackpot if your bet sizes are larger.

We’ll conclude this Adventures Beyond Wonderland slot review by stating that we really loved this game. It was one of the best looking and most enjoyable slots we have ever played. The richness and quality of the graphics is perfectly complemented by the depth of entertainment that the bonus features provide. The progressive jackpot adds some tasty icing on top of the cake.

If you enjoy slots based on 19th century literature, you might also want to try Jekyll and Hyde from Playtech, or perhaps Sherlock Holmes: The Hunt for Blackwood from IGT.