The 9k Yeti slot is powered by software provider 4ThePlayer that has 6 reels and 4,096 ways to win. Inspired by Mount Everest, you encounter the elusive Yeti on a quest for 9,012 x bet payouts per spin. Available to play from just 10p per spin on all devices, it offers a free spins feature where multiple retriggers can lead to 880 free spins in total. There’s also a random Snowstorm feature where symbols are rearranged to give you guaranteed winning combinations. The RTP is high at 97%. 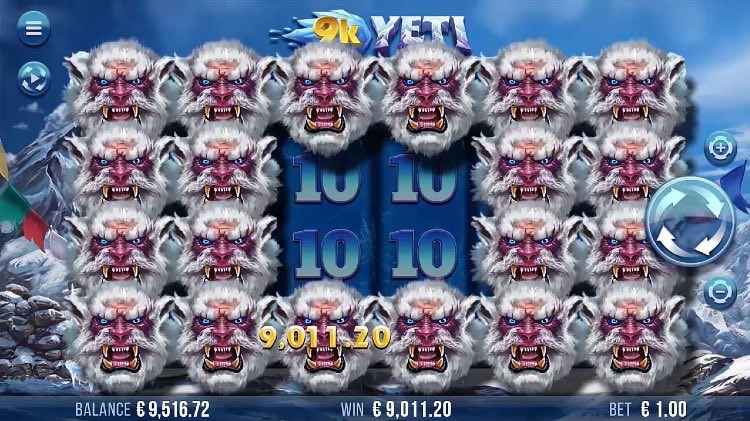 The 9k Yeti slot game is played on 6 reels and 4 rows. With a total of 4,096 ways to win, a winning spin is determined when 3, 4, 5 or 6 identical symbols appear on any of the multiple paylines. With the 3 highest value symbols, you need 2 or more to get a winning combination. You can spin away from just 10p a spin too. If you want to play at higher bet levels, the maximum bet is £25 per spin.

The Autoplay function allows up to 100 autospins. For responsible gaming conscious players, there’s also the option to add loss and single win limits.

9k Yeti’s variance is like Mount Everest, high. Most payouts will be between 1 and 15 times your stake and you’ll get a win every 5 spins on average (the hit frequency is 19.2%). The occasional big win can land though. It’s worth being patient as the max payout is an impressive 9,012 times your total bet on every spin or free spin.

The RTP for the 9k Yeti game is 97%. Whilst the average for an online slot is about the 96% range, 4ThePlayer are focused on delivering high RTP slots so players get more time playing their releases. The margin/house edge is just 3% for 9k Yeti. Being a high volatility slot, the RTP rate will help you hold out as long as possible for that big win.

The 9k Yeti slot is set at the base game which stares up the iconic Mount Everest. Standing at 8,848 metres tall, the sun shines and the soundtrack sees wind chimes tinkling. There’s also a howling noise which adds to the mysterious nature of the mountain.

You will see basic A, K, Q, J and 10 royal symbols on the reels. Then you have climbing equipment used by those who dare scale Mount Everest as the symbols include climbing rope, ice axes and camping tents.

To help matters, you have the wild symbol which is represented by Mount Everest itself. This replaces all symbols except the Yeti footprint symbol.

During the festive period, there is a Santa 9k Yeti slot version. Online casinos can turn on a Santa Hat via their back office settings to see the Yeti wearing a Santa hat on. All functionality and gameplay remains the same.

Whilst most online slots these days offer mobile and tablet versions, 4ThePlayer has gone one step further and developed Big Reel Portrait Mode. When playing on your mobile device, you can play in the standard mode which is found on most other slot games.

You can also opt for Big Reel Portrait Mode which sees the reels spin horizontally rather than vertically. As a result, the reels occupy 60% of the screen as opposed to 20% in the default mode. This feature is available in all 4ThePlayer slots.

The 9k Yeti slot game offers 2 bonus features in total. It focuses on the free spins where you begin with up to 88 free spins. With scope to win a lot more (up to 880 in total), there’s a Snowstorm feature where the Yeti and wild symbols reassemble symbols to guarantee a winning outcome.

The Snowstorm Free Spins Bonus feature is triggered when you land 3 or more Yeti footprint scatter symbol anywhere on the 6 reels. You will get between 8 and 88 free spins:

Look out for the Yeti footprint scatter making an appearance during the feature as these will add to your free spins tally. 3, 4, 5 or 6 scatters will add 5, 8, 15 or 50 free spins. You can do this multiple times with a possible 880 free spins to be won in total.

The 9k Yeti slot is rather simple in terms of gameplay. It was 4ThePlayer’s first-ever online slot and has become a cult favourite. With high definition graphics, it focuses on the Snowstorm Free Spins feature where losing free spins can become winning ones. However, it’s all about the high value Yeti symbol as a screen full of them will result in a mountainous 9,012 x bet payout.

Couple that with a 97% RTP and 4ThePlayer have a slot game that has gained cult status amongst slots fans. Furthermore, playing the 9k Yeti mobile slot is appealing due to the innovative Big Reel Portrait Mode.

📱Can I play 9k Yeti on my mobile device?
Yes. The 9k Yeti slot uses HTML5 technology so is available on mobile, tablet and desktop devices. What makes this game stand out is that you can opt for the Big Reel Portrait Mode which sees reels spin horizontally and occupy 60% of your smartphone screen giving you a better visual experience.
❓What is the 9k Yeti slot RTP?
The 9k Yeti RTP is 97%. Whilst most slots come in around the 96% mark, 4ThePlayer is committed to offering high RTP slot games to give longevity to your bankroll. If you were to wager £100, you would win back £97 on average giving the online casino just a 3% margin.
🥇What is the 9k Yeti slot maximum win?
The biggest possible win from a 9k Yeti spin is 9,012 times your total bet – hence the 9k part in the name. To achieve this, you will need to fill all symbol positions with the high value Yeti symbol. Being a high variance slot, it’s very rare (like a Yeti) but has been achieved.
🎰Where can I play 9k Yeti?
The 9k Yeti slot can be found at most online casinos. Distributed through Yggdrasil’s YGS Masters programme, you can find 9k Yeti at all Yggdrasil Gaming casinos. These trusted casinos also offer you the chance to play 9k Yeti for free.