Branded slots can usually be relied upon to produce a high-quality slots experience, so we were excited when we were asked to have a closer look at 24 from iSoftBet. Based on the TV show of the same name that starred Kiefer Sutherland as Jack Bauer, the slot features sounds and images that will be familiar to many people. There are also a couple of nice bonus features to enjoy.

So does the slot deliver all the action expected? You’ll need to read this 24 slot review to find out! 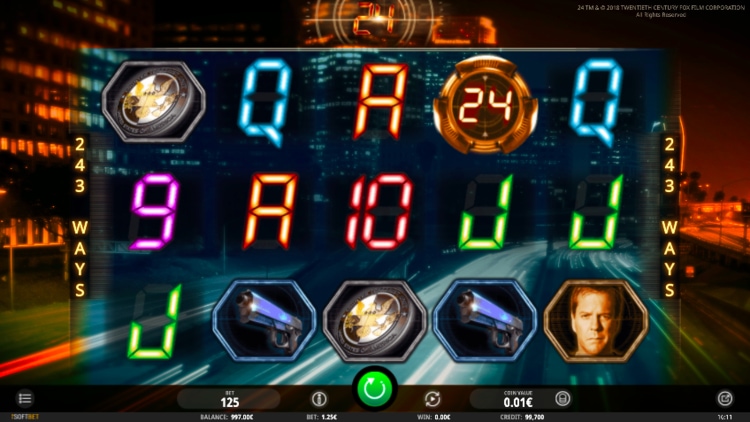 The 24 slots is played on a grid of 5 reels and 3 rows. There are 243 paylines of action for you to enjoy. The minimum bet for UK players is usually 25p and the maximum is £50. The game cannot be played on mobile devices and was released in February 2015. There is an autoplay button available in the game, which might be worth using given how good the game’s graphics and sounds are. We’ll tell you all about those later, but you can also find a pay table by clicking on the I tab at the bottom of the screen.

If you like to base your slots strategy on stats then a more valuable insight might be provided by the game being low variance. This means that you are much more likely to pick up frequent small wins than you are to trigger really big wins. We found that this was the case when we played the game. Small wins would spin in quite regularly, but we were left having to be patient while we waited for the feature to appear. When it did appear, we picked up some very large wins, though.

Branded games should, all things being equal, look really good. The 24 slot machine looks very high class and slick in each of its aspects. The reels appear as though they are on the screen of Jack Bauer’s phone, and they sit in front of an exciting street scene. This is an American freeway at night, lit by yellow streetlights. There is a real sense of vehicles sweeping through the semi-darkness as the clock ticks down and the tension builds. The TV show’s distinctive logo appears above the reels, adding to the immersive atmosphere.

The game uses music from the TV show, as well as some of the sound effects. You’ll hear police sirens and other urban sounds as the reels spin in wins for you. The music plays most of the time and is punctuated with dialogue from the TV show. This is immersive and exciting at first, but it might grate after a few minutes of play. As you might expect from a branded slot, the music and sound effects are generally excellent.

The lower value symbols on the reels are the numbers 9 and 10 as well as the letters J, Q, K and A. They are all rendered in the type of digital, LCD display type font that you see on pocket calculators. They look very much like the numbers used in the famous countdown sequences in the TV show. There are just 3 higher value symbols used on the reels in this slot. They are Jack Bauer himself, as well as his badge and gun.

The other important symbols that you need to watch out for are the wild symbol, the 24 symbol and the Free Spins symbol. The wild symbol is green and will replace all other symbols to create wins for you, apart from the two special symbols. We’ll look at what those do in the next section of this review.

There are two bonus features for you to enjoy in this game. One is a feature where you need to diffuse a bomb, and the other consists of some free spins. We’ll take a closer look at both of those features here.

While triggering this feature takes some real patience it is well worth waiting for. There are some nice graphics and sound effects used, and much more action than you usually find in a free spins feature in a slot of this type. The explosions and gunfire are visually detailed, and along with the accompanying sound effects make this a really quite impressive part of the game.

We have to say that we really enjoyed playing the 24 fruit machine. As branded slots go, it is certainly among the better ones that we have seen. The bonus features are very good and packed with the potential for big prizes as well as plenty of action. The game’s graphics and sound will have you immersed in the world of the TV show soon enough, so this 24 slot review will conclude on a very positive note indeed.

If you enjoy slots that are branded with a TV or movie theme, then you should take a look at Terminator 2 from Microgaming, or Family Guy from IGT.

🎰Are there any action sequences from the TV show or similar included in the 24 slot game?
We were hoping that the bonus features in this game might include a bit of action from the TV show. You will see a little bit of action if a win spins is featuring the Jack Bauer symbol, with him shown reaching for his gun. When the free spins feature starts, you will also see a few frames from the TV show, including Bauer loading his gun and readying himself for action. These certainly help immerse you in the world of the TV show as you play.
🎰Can the Free Spins symbol only land on one reel?
The Free Spins symbol is a shield that looks like an agent’s badge. It can only appear on the third of the 5 reels. This means that you need to show considerable amounts of patience if you want to trigger the free spins feature. We certainly found it very hard to trigger the feature when we played the game. You may well need to use autoplay if you think that a long wait for the feature might be tedious.
🎰Is there any way that I can play the 24 game on my phone?
As things stand, this game is available only on desktop devices. When we used our phone to try to access it on the iSoftbet website we couldn’t find the game. While this is frustrating, the game’s graphics do look much better on your desktop device, and the sound effects are more clearly audible. If you’d like to try a slot based on a TV theme that is playable on all devices, try The X Files from Playtech.