In the world of online casino slots, "over the top" is usually the norm. Neon reels, firework animations, and crazy music are all common features of video slots, though1429 Uncharted Sea is a Thunderkick game that isn't afraid to stand out and be a different kind of beautiful.

Get ready to unleash your inner Johnny Depp, as you come face to face with sea monsters, mythical beasts, and deadly sea storms. Continue reading our 1429 Uncharted Seas review below to find out about the expanding wilds, the unbelievable art-style, and more. 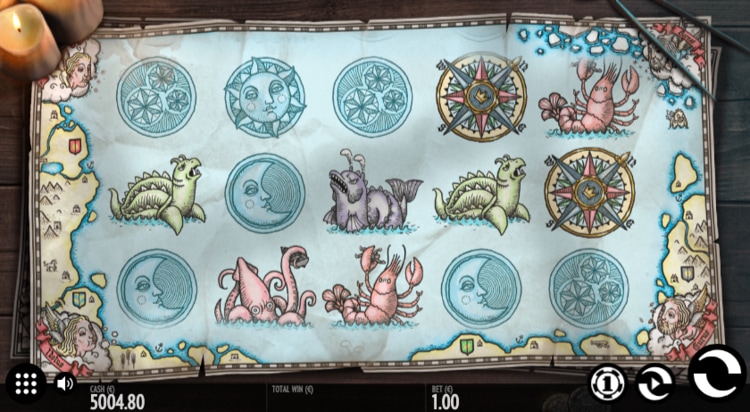 1429 Uncharted Seas is played across 5 reels and 3 rows, and features 25 paylines, making it pretty standard at face value. The first thing you'll notice about this online slot is that it looks completely different from almost any other game you've seen before. The whole slot looks like a hand-drawn 15th-century naval map, including the symbols on the reels.

Spins can be of as low value as £0.10, or as high as £100, so players have a wide array of wagering options at their disposal. Thunderkick has made this slot work on both desktop and mobile browsers, though anyone planning to play this game on the go should definitely play it in landscape mode, as there aren't any touch-input or portrait-mode optimisations in place.

1429 Uncharted Seas' RTP is an extremely appealing 98.50%, which is another factor that helps it stand out from the crowd. As a medium-low volatility slot, big wins can be relatively rare, though you can expect to see frequent smaller wins.  Free spin offers for this specific slot are usually hard to come by, though, which likely attributes to the game's relatively low popularity.

This is one of the most arrestingly beautiful slots games we've ever seen. We know, "arrestingly beautiful" isn't even a phrase you might have ever seen used to describe an online slot before. Thunderkick decided to do away with the usual, cartoonish animation that most online slots are known for, and instead have gone for a 15th-century-inspired, hand-drawn, nautical motif.

The game itself looks like an old naval map, and each of the symbols looks like an old-timey nautical map symbol. Other than the border accents and the pale blue sea background, every single thing on the screen is placed there for a specific reason. The lower value symbols do away with the vegas-style numbering, and are detailed, monochromatic, nautical sketches of the moon, the sun and stars. The higher value symbols are more colourful sketches of a giant squid, a mermaid, a giant lobster, a giant sea-turtle, and a leviathan-esque giant eel.

There are two bonus symbols - the wild symbol is a ship that gets assaulted by a gigantic sea snake in a clean little animation, and the scatter symbol is a colourful compass.

The lowest value symbols of the sun, the moon, and the stars all have identical values, which are marginally lower than the higher value creature symbols. The highest value symbol is the mermaid, with the turtle, squid, lobster, and eel coming next, in descending order. The mermaid offers payouts between 4 and 50 times your stake.

The symbols glide across the reels and even cast basic shadows, making this seafaring slot almost mesmerising to watch. This, combined with the truly amazing soundtrack consisting of orchestral music mixed together with nautical-themed sounds like clanging bells, rolling thunder, whistling winds and more. The combination of both the soundtrack and the visuals combine to create an experience so immersive that other slots now feel cheap and garish in comparison.

If there's any drawback to Thunderkick's seafaring slot, it's that the bonus features are a little basic and underwhelming. This isn't to say that they're necessarily bad, but we definitely left the review processing wishing there was more to this slot's bonus features than what we got to experience.

The Wild (the ship symbol) can only occur on reels 2, 3, and 4, and acts as a replacement for all other symbols bar the Scatter. When the ship Wild appears on a real, a small animation of a sea serpent extends the symbol so that it covers all three rows of the reel and helps form winning combinations.

The Scatter is the colourful compass symbol, and it can appear on any of the 5 reels. You need at least three Scatters to show up on a spin for anything to happen at all. If you do succeed at getting between three and five scatters, then a short animation of your ship entering a storm briefly plays out on screen. Depending on how many scatters have appeared, you'll get between 10 and 50 free spins.

Players can trigger more free spins if the Scatter reappears during the bonus phase, up to a maximum of 50 re-triggered free spins in addition to the original free spins. And, unfortunately, that's it. There are no other bonus features to be found.

While we may not have been blown away by 1429 Uncharted Seas' bonus features, we can't deny that we walked away from this slot fully intending to go back to it later on. This might not be the online slot that takes you on a wild ride of explosions, avalanches, and warping to different dimensions, but it IS the kind of slot that's going to help you unwind after a long day.

Unlike a lot of other slots out there, 1429 Uncharted Seas is legitimately an audio-visual treat, as well as having a phenomenal RTP. Sure, we can't recommend this slot to anyone looking for an adrenaline rush, but if that isn't a dealbreaker for you, we highly recommend that you give this Thunderkick game a spin.